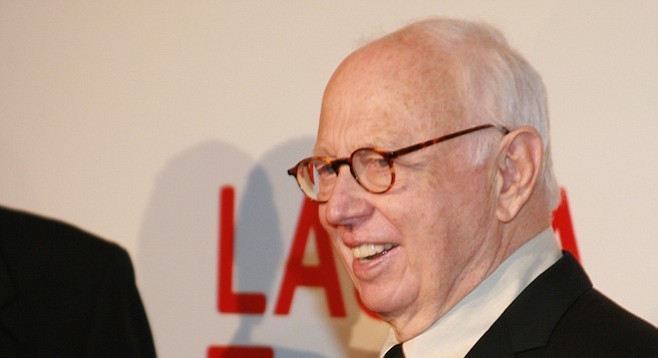 Sunday's passing at 92 of Ellsworth Kelly, noted in the New York Times as "one of America’s great 20th-century abstract artists," has gone unheralded in San Diego, though he was once a household name here, famous for walking away from a controversial $450,000 commission offered by the Port of San Diego. 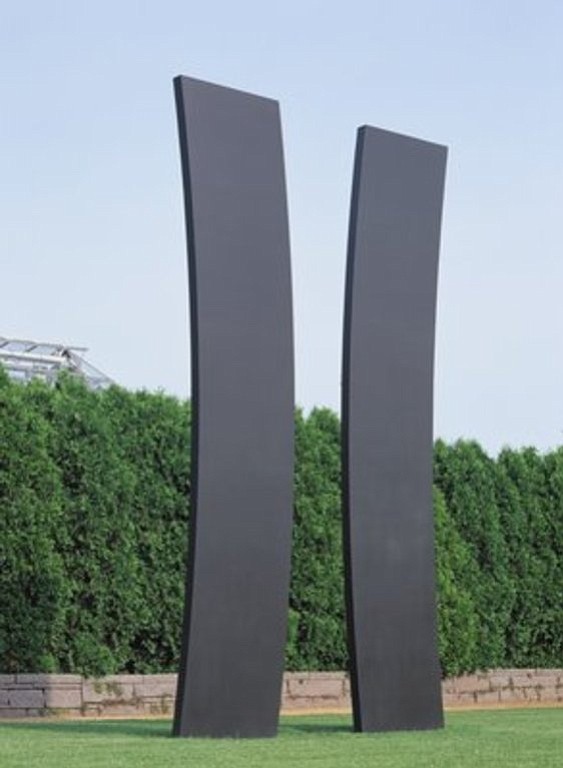 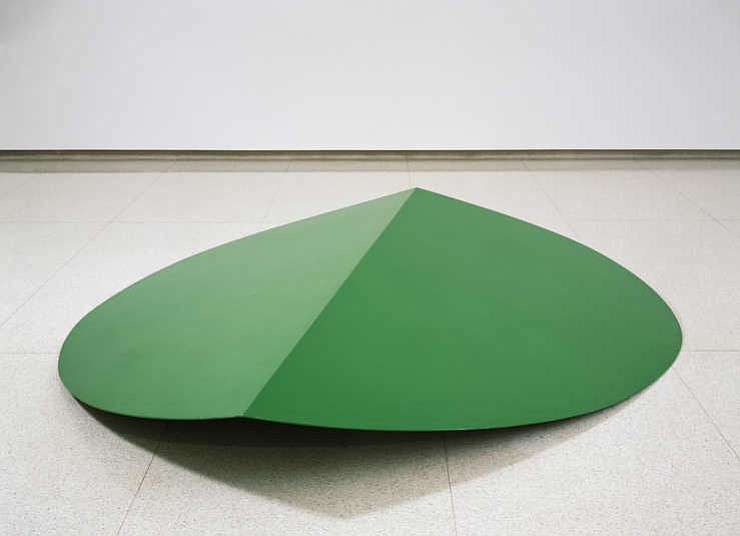 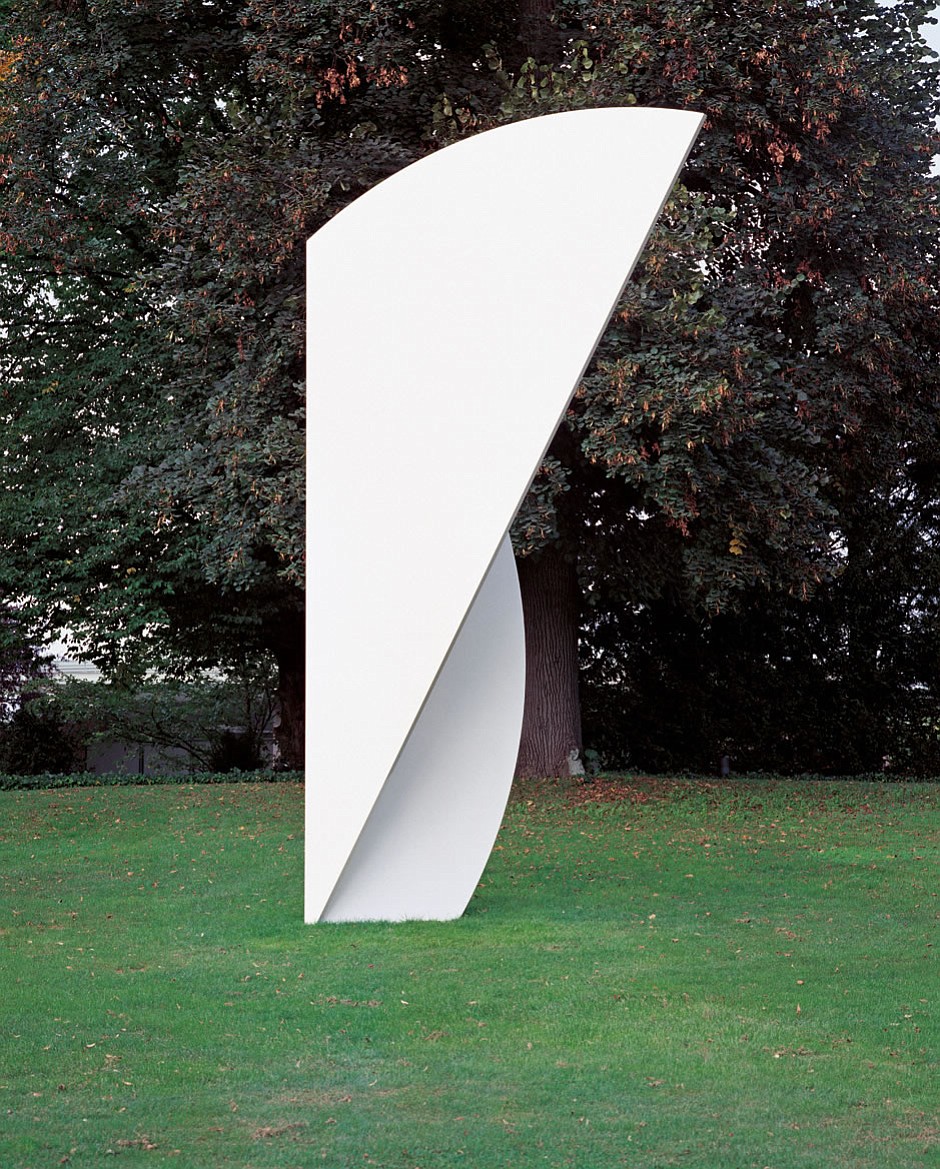 "Mr. Kelly was a true original," says Kelly's obituary in the Times, "forging his art equally from the observational exactitude he gained as a youthful bird-watching enthusiast; from skills he developed as a designer of camouflage patterns while in the Army; and from exercises in automatic drawing he picked up from European surrealism."

The artist, adds the obituary, forged "a deeply personal and exploratory art, one that subscribed to no ready orthodoxies, and that opened up wide the possibilities of abstraction for his own generation and those to come."

But Kelly's cultural roots in the Paris art world and New York City inspired controversy in San Diego when it was announced in 1985 he had been picked to create a monumental waterfront sculpture here.

For Kelly, already growing his reputation, the proposal was a big deal.

L.A. Times San Diego arts editor Matt Damsker heralded the project in June 1985, saying that by 1990, the city would look upon, "the most ambitious work to date by one of America's greatest living artists, Ellsworth Kelly — a 70-foot Minimalist monolith of stainless steel, matched by a great concrete prow, a cutting edge against the night.”

Backers of the project said it would put the city on the map of international culture.

Detractors, including a group of local artists, asserted the offer — stewarded by Jerry Hirshberg, then chief of Nissan's design center here — had been illegally arranged by port honchos behind closed doors.

"The port and its committee decided upon the project and selected the artist and entered into an agreement with the artist without letting these matters be heard before the public in compliance with the Brown Act," said a lawsuit filed against the port in the wake of Kelly's departure.

Responding to criticism that the port was ignoring San Diego artists, Hirshberg told the Times, "How can I be against 'local artists,' whatever that means? Hell, I'm a local artist. To say that anybody who places excellence as the top priority, is bad for local artists — I can't understand that. But what does location have to do with it anyway? When we look at art, I'd rather not know where anybody is from.

"If San Diego is to become alive in the cultural sense, it's going to have to drop a lot of its preconceptions and open itself up to public ferment," Hirshberg told the paper.

"Even though not all of the public comment on the Ellsworth Kelly is positive, suddenly people are talking about aesthetics! My kids have even had a discussion on the Kelly in their classroom! We're becoming a meeting ground for divergent tastes and opinions — and that defines culture."

Then, although he had previously agreed to modify the project to assuage some of the critics Kelly pulled the plug.

In a September letter to the port surrendering his commission, Kelly wrote, "The change in the original site has caused me to rethink the sculpture. I now find that the single sculpture is technically out of my control, and I do not feel comfortable in my ability to provide for the City of San Diego exactly what they want and deserve."

"If the site and the artist and the opportunity exist, I think more artists will be willing to jump in," he told the L.A. Times.

"The momentary effect is a pause to reflect. Kelly, I think, was a sensitive plant who didn't want his work in this kind of environment. Fortunately, it will not stop the process. That's the good news."

Port board chairman Bill Rick had a different take. "That's an artist of national scope," Rick said. "I don't know what it's going to be. I was a little less than happy. I put more than a year of my life into this."

He added, "There's no law saying we've gotta spend the money on art."

Said UCSD sculpture collection director Mary Beebe, a member of the port's cultural committee: "We tried to change his mind. A lot of people tried to rally him. The whole thing made him very uncomfortable. He thinks he made a mistake in getting into this in the first place."

Daniel Larsen, another port district director, blamed Kelly's age for his reluctance to grapple with the irate San Diegans.

"I didn't know until today that he was 65 years old," Larsen told the Times. "I can understand that a man that age might want to live out his life in peace."

Three years after the debacle, Hirshberg led an exodus of members out of the port's arts advisory committee after the board of commissioners killed yet another waterfront art project.

The port, noted Hirshberg, had "turned down an Ellsworth Kelly (proposal), a Vito Acconci and a Roberto Salas. I think we have no choice."

Observed the Reader’s Max Nash in April 2001.: "Among out-of-town artists and critics, we have developed a rep as the burgh that’s not only unwelcoming but outright hostile to the idea of public funds being spent for things created by living artists. And should an artist try to sneak one of their abominations into town, we’ll make them haul it out of here."

So instead we ended up with this monstrosity! 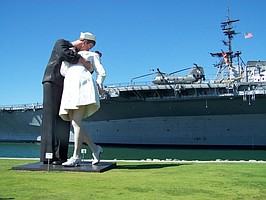 Took the words out of my mouth, and provided a photo too. Thanks. Historically memory counts, and Matt Potter's got it! Also, nice photos of other Kelly works that are not paintings.

Then there is the Convention Center sails.

the Port District still does it's work behind closed doors, right?