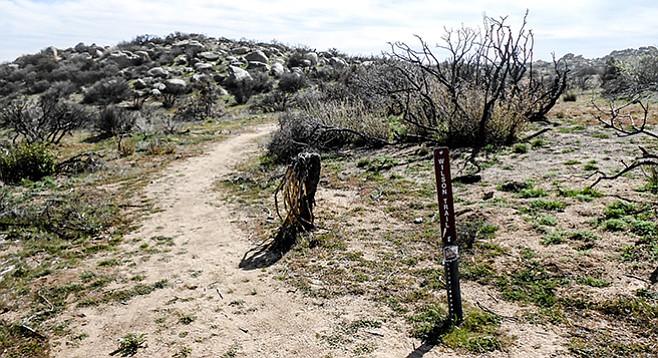 Wilson Trail and Peak were named for the rancher, Alfred Wilson, who ran cattle in this area in the first half of the 20th Century. The Wilson Trail goes southeast along Pinyon Ridge for several miles to just beyond Wilson Peak, which, at 4573 feet, is the ridge high point. Wilson Trail and Peak are in the middle of a designated wilderness area and not open to motorized vehicles. The trail goes through an interesting mix of forest, chaparral, and desert species. There are scattered pinyon pines and junipers, as well as abundant cholla, sugar bush, mountain mahogany, and chamise. Although the area was burned in the 2013 Ranchita Fire, it is encouraging to watch the vegetation recover, often with great success. Also, the 2013 fire made this a prime area for spring wildflowers, which, because of the altitude, bloom later than those in Borrego Valley.

The summit has a sweeping view of Borrego Valley

The Wilson Trail now serves as a hiking-only trail. Years ago it was open to 4WD vehicles, as well as horses and cattle, but it has been closed to them for many years now. The trail goes over a series of ridges and through intervening valleys on an easily followed decomposed granite path, maintained only by the feet of hikers who have gone before on this trek just north of Wilson Peak. To reach the peak, look for one of the many improvised trails up to the peak, and don’t miss it, as it provides spectacular views in all directions. To the east are the Salton Sea and the Chocolate Mountains in Imperial County. To the southeast are Whale Peak and the Pinyon Mountains. To the southwest are the Laguna and Cuyamaca mountains, and to the northeast are Palomar Observatory and the sweep of the Santa Rosa Mountains with Borrego Valley below.

The trail is entirely within the transition zone found in the dryer and hotter high-elevation mountains of San Diego County. There are conifers — junipers and pinyon pines — but not those requiring more rainfall and cooler temperatures. Many typical desert plants are abundant here, especially cholla and other cacti. There also are numerous chaparral species, including sugar bush, scrub oaks, Mojave yucca, chamise, big berry manzanita, and cup leaf ceanothus.

As mentioned above, this area burned recently. You will see blackened skeletons of many of these plants. Some may not be recognizable, as most of their distinguishing characteristics were burned. However, others are sprouting new growth from their bases or were only minimally damaged by the fire. The fire killed most of the desert apricot bushes and very few seem to be sprouting new growth. Similarly, the pinyon pines found on the ridge appear to be dead. Their recovery will depend on seeds released from their cones by the fire’s heat. Most junipers, however, are faring rather well. 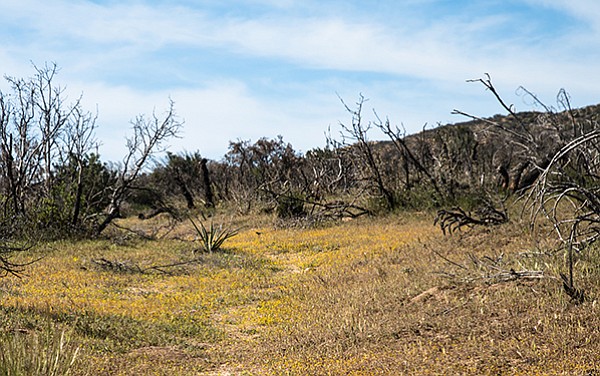 The best parts of the Wilson Trail are the spectacular wildflowers found here in spring. There are large patches of white layia or white daisy tidytips, cream cups, goldfields, baby blue eyes, desert blue bells, yellow pincushion, and many others. Even if you can’t make it during the wildflower season, the trail provides excellent views in all directions and an abundance of huge granite boulders eroded into fantastic shapes. 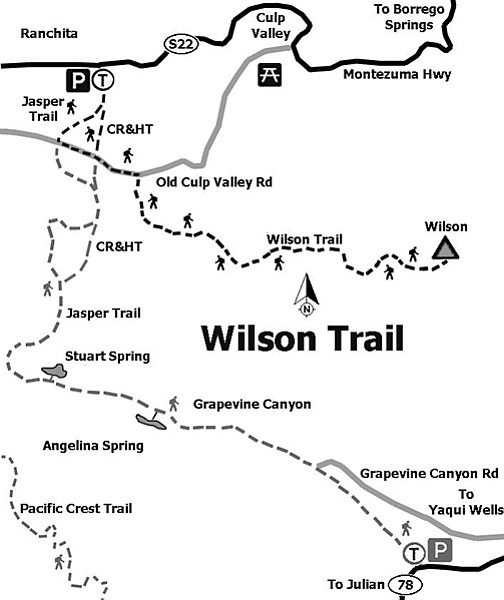 Directions: From the Ramona intersection of SR-67 and SR-78, drive east on SR-78 for 14.5 miles to Santa Ysabel. Turn left (north) and drive 11.5 miles on SR-79 N and turn right (east) onto the San Felipe Rd. (S-2). Drive 4.7 miles on S-2 and then turn left (east) onto Montezuma Rd. (S-22). Go 6.8 miles on S-22 to the Jasper Truck Trail on right (south). A 4WD or high-clearance vehicle is recommended. Follow the Jasper Trail for 1.4 miles to Old Culp Valley Road, also a jeep road, and go left (east). In 1.5 miles is the signed Wilson trailhead on the right. Park here to begin the hike. The trailhead is also accessible from Culp Valley.

Difficulty: Moderate with elevation gain/loss of 1400 feet. Dogs and mountain bikes not allowed on hiking trails. No facilities and no water. The relatively high elevation of Pinyon Ridge means that it is usually at least 10 degrees cooler than Borrego Valley, so it could be attempted at any time of the year, although it may be uncomfortably warm from June through September.