The re-reinvention of Pasaje Rodriguez

Tijuana is all about experimentation 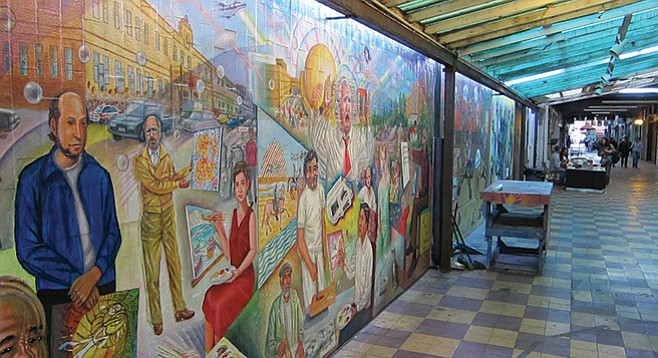 “It wasn’t really going anywhere,” the 32-year-old Tijuana native recalls of his 2013 visit from Mexico City, where he spent two years working in the digital cinema industry. “It was slowing down. People were starting to avoid the pasaje because it was dirty, rowdy, and dark. What had started out as galleries turned into personal party spaces. It was not functional at all.” 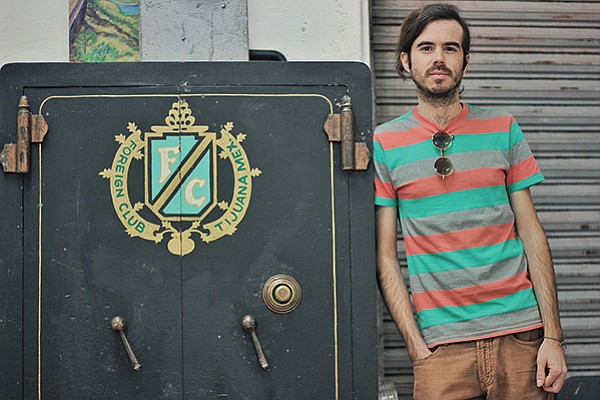 Montijo returned to Mexico City and took a cultural management workshop where he became inspired by the potential of creative economy.

“All around the world in 2008 during the economic crisis, the only economy that kept growing was the creative industry — art, music, food. So I applied that model to the pasaje.”

The former arcade of curio shops had been abandoned for nearly ten years before the late Max Mejia, a cultural promoter and human-rights activist, talked to the owners and started Pasaje Rodriguez Arte y Diseño (which some call by the acronym PRAD)in 2010. Working alongside dead-space reactivation nonprofit Reactivando Espacios — which was also re-envisioning Pasaje Gomez across the street — the initiative lasted for about two years with a number of galleries and boutiques coming and going along the way.

“After PRAD died down, the pasaje was in pretty bad shape,” Montijo continues. “It was dirty, kind of unsafe, no lights, no security, no clear direction. But it was already culturally oriented, and that was a huge advantage. Some credibility had been lost, so we had to drag people back here to see how things had changed. We had to build up confidence again. Even the government was talking badly, saying this is where artists went to push heroin, not sell art. So we started with the basics: cleaning up all the trash, kicking out some of the people that were hanging out here, filtering proposals to be something legitimate. At the time, there were hippies looking for a cheap place to hang out next to high-end galleries selling $1000 paintings when most people would show up with 20 pesos in their pocket. So I started here working for free, trying to show that the pasaje could be sustainable without milking off of the owners.”

Taking cues from the cultural movement in Mexico City, Montijo returned in the summer of 2014 to re-invent Pasaje Rodriguez once again.

“TJ is still emerging, so you can implement a lot of ideas here that have already been proven in Mexico City,” Montijo says. “I arrived with a plan, and I think the owners had no other choice but to try it, even though the pasaje was done as far as they were concerned. It was unprofitable. They based their ideas on the good old days, two or three decades ago. This is a city of cycles. Now, my generation is creating its own industry. It’s a blank slate. It’s not the traditional U.S. or Mexican way. It is very experimental. Tijuana is all about experimentation. It’s not tied down to anything. There are a lot of spaces and opportunities to do new things and implement new ideas.”

Making use of connections from growing up in Tijuana, Montijo began to repopulate the alleyway with more forward-thinking renters who had a clear vision for cultural and economic development.

“It’s simple,” he says. “We aren’t extremely picky, but we are looking for culturally oriented proposals with experience, education, and a plan to make money and keep the pasaje sustainable. Here, it has to be something different that you can’t find a few blocks away. It’s an alternative space. We want the emergent, the independent, the avant garde. If you want a hot dog stand or a typical coffee shop, this isn’t the place. Is it organic coffee? Now we’re getting somewhere. It needs to have a twist.”

These days, the pasaje is home to a couple of art cafés, Mamut microbrewery, several boutique shops, book shops, a bike shop, a record store, Happy Vegan restaurant (which hosts a recurring vegan food festival), and, exemplary of the pasaje’s penchant for something different, a Southern home-cooking joint called Voodoo Stu’s.

Montijo’s personal pet project, however, is the burgeoning multi-use venue space, La Caja Fuerte — named for the large safe left over from the ’20s when the locale was part of the Foreign Club casino and hotel. Until recently, the locale was known as Willy’s Place, a flea market and residence of songwriter Willy Clauson, the man who brought “La Bamba” from Veracruz to the U.S. in the ’50s.

“He was pretty much dying in there, so his family took him home and he’s doing better than ever,” Montijo says. “It’s the biggest space in the pasaje, so we made it a venue with the idea of attracting a big crowd to come see how the pasaje has changed. It’s an anchor to bring people out for anything from yoga classes to cinema screenings to educational workshops, such as Dr. Victor Clark’s transborder culture class based out of SDSU. It has an indie vibe and is very tolerant. We aren’t being held back by public funding, so we’re open to pretty much anything. There are many plans, but for now the owners want to see results, culturally and financially. Eventually, this can become an important cultural reference point for the world. Tourists come and say, ‘This is like Paris or Berlin,’ and that’s a huge compliment. It means that what we’re doing here is working.”

Montijo notes that Pasaje Rodriguez’s original rent of $100 a month per locale has since doubled, on average.

“It’s not stale anymore,” he says. “We need to keep up with the demand. Of course, it’s still real estate. Cultural management is necessary, but naturally the owners are interested in value, even though they are coming to understand the new Tijuana. Sure, it’s still for the tourists, who are slowly returning, but it’s also for the locals.”

Thanks for this story Chad, a great inspiration!

For those of us who live in stagnant cities like, oh say San Diego, and want to inspire and refresh the environment there is a simple method. It doesn't even require much imagination. Just go to a living city, or look into its telephone book, and ask; 'What does this city have that my city lacks?'.