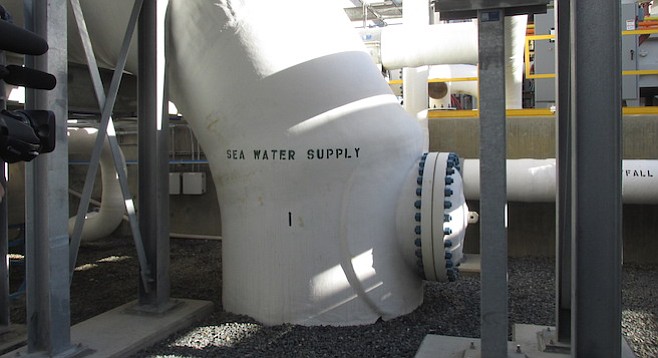 “Now serving Pacific on Tap” was the slogan of the day December 14, when the San Diego County Water Authority announced the full operation of the largest desalination plant in the Western hemisphere.

In actuality, 1.8 billion gallons of desalinated water had already entered the San Diego County supply system since testing was completed the week of November 8.

Poseidon Water has been planning the plant since the Clinton administration. Initially local water agencies and governments were skeptical of a private firm providing a basic government service. Some opposed the idea.

“Over the years, we won them over,” said Poseidon’s Peter MacLaggan. “We were willing to take all the risk. If we couldn’t deliver the product, we wouldn’t get paid.... There are no public obligations [bonded debt].”

The oceanfront Carlsbad site was chosen due to its already existing industrial use by the NRG power plant and its close proximity to distribution. The desalinated water is first pumped to a county water authority pipeline in San Marcos. “We can reach 80 percent of water users from there,” said MacLaggan.

The average water district will pay about $5 more per month, per customer, for the water. “We are no longer totally dependent on snow in the Sierras and rain up north,” said Mark Weston, chairman of the water authority. Weston also pointed out that the Poseidon plant and its distribution is far south of major earthquake faults that could potentially disrupt the water supply coming in from outside the county.

The 72” intake pipe sucks seawater into the sand-filtration system, a flocculation tank. Then 214 filters remove any microscopic particles. Over 2000 pumps transfer the treated water into 16,000 large reverse-osmosis filters. (Protec Arisaw America, in Vista, manufactured the large membranes.) Half the seawater sucked into the system is returned to the ocean, flushing the removed salt. Poseidon claims that 500 to 1000 feet from the outlet, tests cannot detect high salinity in the water.

Officials said the plant was already pumping at full capacity, expected to deliver its daily 50-million-gallon output, equaling 10 percent of the county’s needs.

“It serves about 400,000 people. Our pipeline flow could fill a residential swimming pool in 40 seconds,” said MacLaggan.

Poseidon now has a proposal for a similar plant in Huntington Beach.

During a morning tour before the ceremony, members of the press were offered a drink of the desalinated water. It tasted as good as any bottled water. Unfortunately, as with all of our tap-water supply, the desalinated water will be treated with bacteria-killing chlorine and other chemicals by local water districts before residential delivery.