A matter of manscaping

Hipsters embrace the vision of the ursine lumbersexual 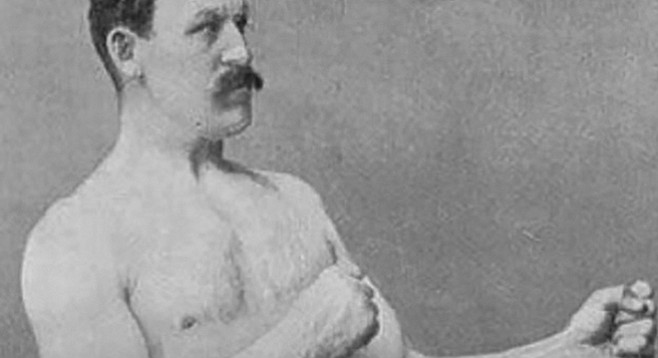 I figure “shaving” is pretty topical right now, what with Movember in the record books and Decembeard getting underway. My wife keeps dropping not-so-subtle hints that she would enjoy seeing my body with more of a ... there’s no delicate way to put this ... but I suppose “hairless aspect” works as well as anything. I don’t think that guys born to a life of hairy chests, shoulders, backs, or other parts are necessarily less manly than other men; yet I feel as if removing my natural pelt would emasculate me. Does that make sense? I don’t know! I mistrust men’s magazines, as I’m pretty sure they’ll just say whatever sells the most stuff, so I hirsutely await your unbiased answer in this matter of manscaping life or death.

Before I delve into the specifics of Doug’s case, let me address a point of common sense, which is that saying, “I’d like you better if…” to your other half is like trying to brew up a nice brown ale by taking your favorite bottle of craft lager and refusing to drink it until it darkens sufficiently in hue. The result you get may not be the one you want, despite superficial resemblances, and didn’t you like the lager well enough in the first place?

On the subject of hairiness, we hipsters embrace the vision of the ursine lumbersexual, and all of the hirsute masculinity wrapped up therein. At least half of modern hipsters consider a full and flocculent beard to be the sine qua non of urban manliness, a proud statement of masculine identity countermanding the reality that few hipsters come any closer to manual labor than pulling the tap handles at a local craft-beer bar, carrying their Macbooks to the local café for some grueling SEO content updates, or perhaps pushing a tattoo gun around somebody’s bicep at $150 an hour. Not without irony has the educated and entrepreneurial hipster class gravitated toward farmer chic.

Yet, a carefully cultivated image of manliness is not the same thing as manliness itself. Indeed, the wooliest hipster can shave himself baby-smooth at a moment’s notice without fearing the loss of his masculine powers. He will rely on his powerful sense of ironic detachment to distance his sense of self from any skin-deep allegory to Paul Bunyanesque machismo.

Caring so much about some errant whiskers, a few chest hairs, or the final wisps of an ironic mustache would be very non-hipster.

So, my piliferous friend, can you keep your manliness following the epilation of your formerly lanate self?

Of course you can. You should be more concerned with figuring out a more productive way to raise the subject of physical appearance between you and your wife. I’m going to go out on a limb and guess that you two could talk about it with the kind of depth and insightfulness that the average hipster reserves for discussing the merits of some obscure band available only on Soundcloud.