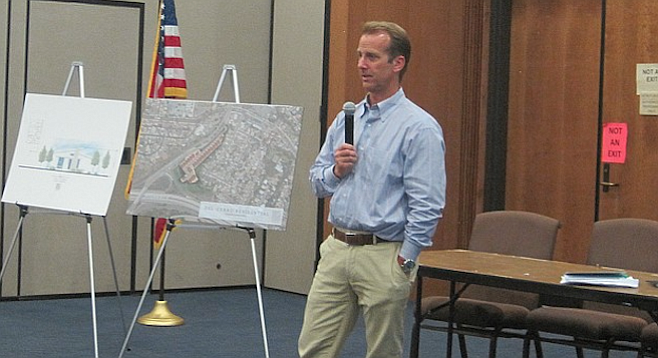 At a December 2 Del Cerro Action Council meeting, a representative of a real estate developer said traffic wouldn’t increase much after the construction of 26 homes on a 5.6-acre site off College Avenue.

ColRich vice president of acquisitions Tony Pauker said residents of the project would add less than 1 percent of traffic volume at the two closest intersections. 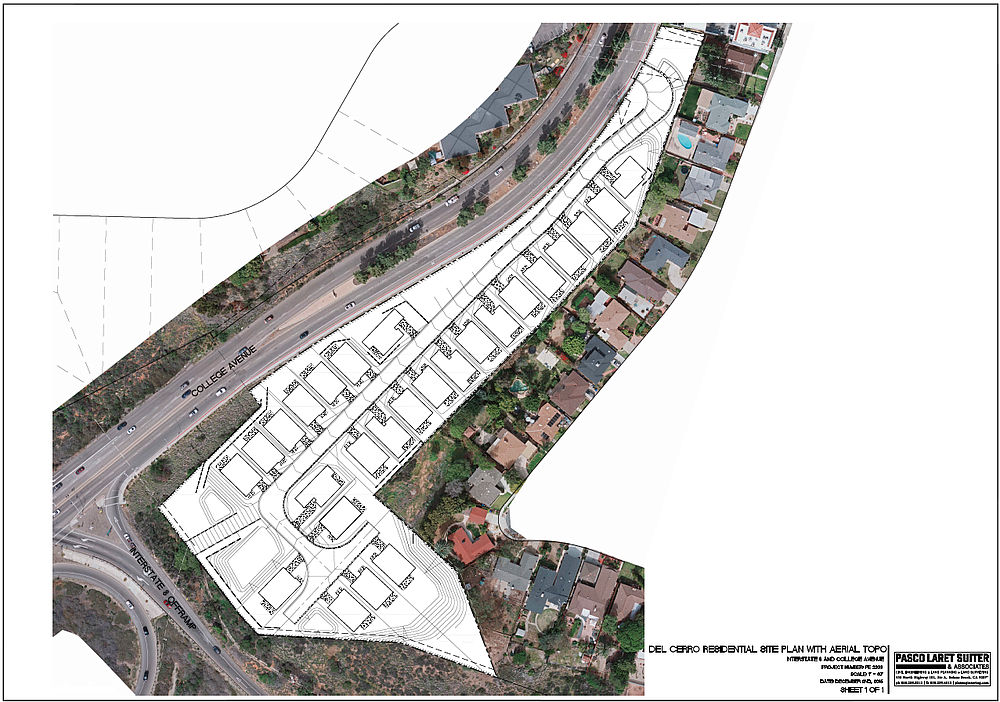 The forum was scheduled to update residents about ColRich’s plan to develop a vacant lot south of the Chevron station located at the corner of College and Del Cerro Boulevard. The land is bounded to the east by homes on Marne Avenue and to the south by westbound Interstate 8.

The plan met with protests when Pauker first presented it at the July 22 council meeting. Residents expressed concern about the added traffic, as drivers leaving the site will have to drive north on College and make a U-turn to get to I-8.

At the recent meeting, residents challenged the finding in the traffic study, which has yet to be completed. “It’s far more than 1 percent. You don’t live here,” a woman told Pauker. (Though people gave their views, they didn’t provide their names.)

Pauker said, “I'm doing a traffic study that is not required” by the City of San Diego, and the completed study will be “made available” to the action council and the Navajo Community Planners, Inc. (the community planning group).

Some residents spoke about the route from the development to Phoebe Heart Elementary School, which is on Del Cerro Boulevard west of College. Returning home could mean driving south to make a U-turn by San Diego State University. Pauker said people would make informed decisions when buying homes.

Another woman said emergency access could be affected. Emergency vehicles could be forced to make a U-turn by the university, and fire will “burn our houses.” A man said, “Hopefully, when a fire truck goes by, people will pull over. I'm not for or against this project,” but instead of speaking about “what-ifs,” he suggested people should ask questions.

Residents also made suggestions. A woman asked if a road into the project could be built on land near I-8. Pauker said Caltrans owns some land near the southern boundary. A man asked about using infill to construct an access road. Pauker said he would be “happy to ask the traffic engineer about it.”

A man asked if a signal light could be installed at the project entrance. Pauker said the location is too close to the signal at the Del Cerro Boulevard/College Avenue intersection for another light to be installed.

Residents also raised concerns about homes being turned into mini-dorms. Pauker said the homeowners’ association’s covenants, conditions, and restrictions could prohibit short-term rentals like Airbnb. Regulations can’t prevent people from renting homes, but “I can’t fathom why someone would spend $700,000 on a three-bedroom home and fill it with college students,” said Pauker.

There was one potential buyer in the audience. A man said he and four friends were interested in the homes. He said they went to Hearst, Harvey Lewis Middle School (in Allied Gardens), and Patrick Henry High (in San Carlos).

Pauker said he hoped to do an informational presentation on the project at the Navajo planners’ January meeting. ColRich’s timeline also includes a San Diego planning commission hearing.

A developer wouldn't lie about the impact his project would have would he? The traffic in that area is awful during the morning/college rush and in the afternoon/evening rush. 26 homes translates into a minimum of 52 cars @ 2 trips a day = 208 trips a day (one trip out one trip in). Add to that others living there that may have cars and all the deliveries and service providers and gusts/visitors it will really clog up the intersection of College and DC Blvd.

An earlier, more detailed description of the traffic situation there, that appeared in the Reader, did a good job of pointing out the folly of this development. Isn't it curious how a piece of land that was deemed unusable for homes a couple generations ago is now prime property? If the developer wanted to pay for a major revamp of the streets, this might make some sense. But then the project wouldn't a big money maker for owner, would it? Just keep in mind that the approval will be in the hands of the city council, the elected body that runs the slobberin' city.

Did the Reader misspell the name of the presenter? "Peuker" might better explain him vomiting his nonsense in the meeting.

I live near that area. Allow me to chime in and say this is not a very good idea. In fact, it's just plain dumb.

It's REALLY tough for me to see how 26 more houses off of a street that services hundreds could make any real difference. And even if you get delayed by another minute, don't worry, the traffic on the 8 will still be waiting for you. Now, if this was 260 houses, I could see the point. But this is much ado about nothing.

However, so long as we're in a "severe drought" where we're supposed to be showering with buckets and letting our yards die, there should be no building permits being issued for new construction. Secure new water supplies first, then accommodate newcomers.

"Regulations can’t prevent people from renting homes, but 'I can’t fathom why someone would spend $700,000 on a three-bedroom home and fill it with college students,' said Pauker." Are you freaking kidding me? That's all many buyers in the College Area are already doing!

These 3 bdrm/3 bath and bigger houses are absolutely going to be bought as investment properties to turn into mini-dorms for rent to three to six-plus students. Their traffic study can't begin to account for all the extra vehicles this will bring.

Might as well plan now to have a campus shuttle run to this development; that's about the only hope to mitigate the impact.

"A man asked if a signal light could be installed at the project entrance. Pauker said the location is too close to the signal at the Del Cerro Boulevard/College Avenue intersection for another light to be installed."

Safety concerns regarding traffic, emergency vehicles and pedestrians should be top priorities for all infill development. With 2 schools very close by, and the intersection already rated D, its no wonder a 1% figure is used to try and minimize the impact.

Besides, if a signal got your project approved, you would do it in a heartbeat.