'Tis the season for porch shoppers

After absconding, thieves leave behind packaging (and undesired present) 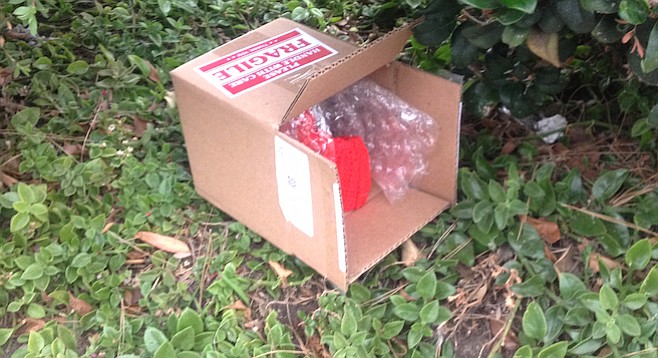 Walking her dogs at 6:00 a.m. in Bay Ho on November 19, Stephanie Rosenbaum spotted a package ripped open in the bushes halfway down the 4000 block of Kamloop Avenue.

"It was a light green soft-sided padded envelope," said Rosenbaum on November 23. "It traveled all the way from Massachusetts and was addressed to someone named Hayden. I didn’t take anything out but I saw something red that someone had knitted. The package belonged to someone on Hopi Place."

Rosenbaum returned the package that morning on her way to work. Because it was early, she left a note with the package instead of ringing the bell. Rosenbaum has also encountered stolen packages tossed away on Southhampton Street and Derrick Drive.

While Rosenbaum has not personally had packages stolen, her mother had a similar incident on Cheshire Street in Clairemont last Christmas. After hearing a commotion outside, she found an open Amazon box on her porch with its contents left behind.

Rosenbaum plans to install security cameras, though she's not sure it will help capture the thieves. She said that a neighbor on Cheshire Street installed cameras after someone had repeatedly stolen her mail. A news story was done after a woman was caught on camera, but an arrest was never made.

Ryan Gamble of Bay Park said on November 29 that he also had packages stolen on November 19. Gamble said, "This is the first time we've experienced packages stolen from our front door. We had three packages delivered that day: two from the Loft and one from Mammoth Mountain. Clearly the suspects weren't interested in our ski passes since they left this package discarded on our front lawn."

Becky Cervantes has lived in the same apartment building on Genesee Avenue for 14 years. Cervantes said that every year the garage emergency door locks are found broken, allowing anyone access. On November 21, Cervantes and two of her neighbors had packages stolen.

On November 19, Cervantes’s son discovered a neighbor’s car broken into at 1:20 a.m. Cervantes said, “Motion [sensor] lighting was installed but someone keeps moving and turning them off." Cervantes strongly suspects a neighbor because more thefts started after they moved in.

Kathy Dunn of Charing Street had packages stolen earlier in November. This was a first for her and she orders a lot online. Both packages were from Amazon and USPS confirmed delivery. One was Norwegian chocolate and the other watch-band parts. Dunn said, "I am going to start using the Amazon locker, although it isn't really convenient to my home."

According to Amazon's website, the lockers are free and use an emailed code system. The lockers can accommodate packages no larger than the size of three shoeboxes stacked.

I contacted Amazon, UPS, FedEx, and USPS for comment. Amazon didn't respond. I did talk with representatives from UPS (Dan Cardillo), FedEx (Rae Lyn Rushing), and USPS (Stacia Crane), but they all declined to comment on the number of packages stolen in San Diego annually and during the holidays. I asked if smaller packages were stolen more often than large, but they all declined to comment.

The consensus was that thieves following mail-delivery trucks is rare and blown out of proportion by the media.

I also contacted Scott Wahl, SDPD media relations, for comment about how many package-theft cases are solved and if surveillance photos or videos help the odds of an arrest. Wahl was unavailable but forwarded my request to someone else who never got back to me.