Hidden underwater, even at low tide

Watch out for Grimace Rock 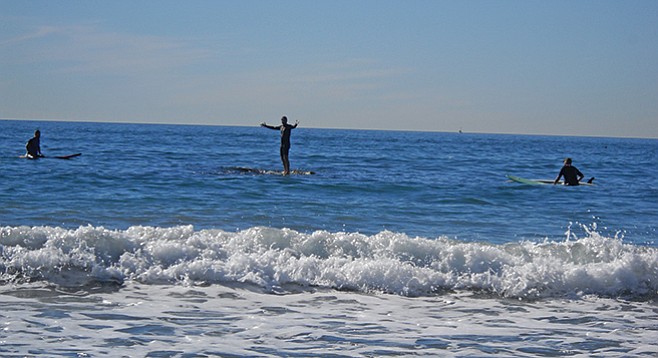 I asked the most knowledgeable surfer I know about the name Grimace Rock. Skip Frye told me it comes from a picture taken when a surfer realized he was about to hit the rock.

Grimace Rock is the largest rock in the cove at Tourmaline Surfing Park in Pacific Beach. Most of the time the rock is hidden underwater, even at low tide. But if the tide is unusually low, the rock becomes a dangerous obstacle if you do not know exactly where it is. It is located directly across from Six House on the cliff, and approximately along the line with P.B. Point. (Six House refers to it being the sixth house from the right side of the cliff. It was the house for The Real World: San Diego, filmed in 2011.) During an astronomical low tide, the rock is clearly visible and is almost completely out of the water.

Joe Roper, who has owned and operated his namesake surfboard repair shop for 40 years, says, “That rock kept me in business for the first five years. We must have repaired thousands of surfboards that hit that rock. Before fin boxes were available, hitting the rock caused much more damage.”

Despite the danger, Grimace is a good place to catch waves on small surf days. Knowledgeable surfers can be found sitting inside of the rock. The waves are not big but they are surf-worthy. On bigger surf days, surfers can ride a wave all the way in from P.B. Point and then swing around Grimace and catch that wave all the way to the parking lot.

There is also Little Grimace, about 20 yards from Big Grimace. The two combine to make it a good idea to never dive headfirst off a surfboard at Tourmaline.