If you have a dime, your grocer will sell you a paper sack 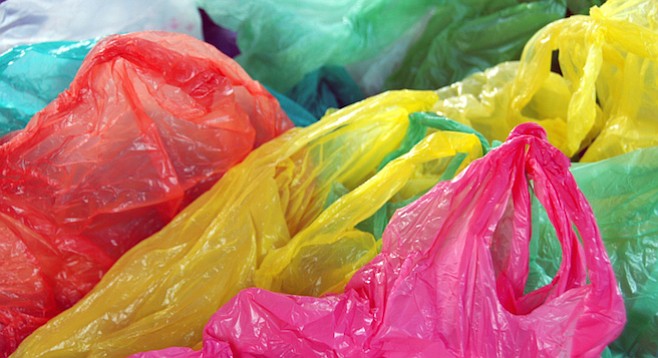 The proposal to ban grocery stores and big-box retail stores from using plastic bags has moved one step closer to becoming law.

On November 20, the city posted the draft Program Environmental Impact Report required before council can enact the ban on plastic.

The Single-Use Carryout Bag Reduction Ordinance would prohibit grocery stores, liquor stores, convenience stores, as well as retail stores from using plastic or non-recyclable paper bags. The stores would promote the use of reusable bags. When none are available, retailers will charge a ten-cent fee for each recyclable paper bag.

Stores that use so-called "product bags," including bags without handles used to carry meat and other produce, as well as restaurants and thrift stores are exempt from the law.

City officials have been pushing for a bag ban for years. In February of this year, mayor Kevin Faulconer requested city staff begin conducting the environmental review necessary in order for a ban to become law.

If approved, San Diego would become the 89th municipality in California to adopt a ban on plastic bags. San Francisco was the first city to ban plastic in 2007. Los Angeles followed suit in 2013. Other large cities in the state to have already approved the ban include San Jose, Pasadena, and Long Beach.

In November 2016, California voters will vote on a statewide ban, which governor Jerry Brown signed into law in 2014. The law was challenged by a coalition comprised of plastic companies and grocery-store associations, forcing the issue to a public vote.

The public review period for San Diego's ordinance ends on January 19. Afterward the ordinance will move to the planning commission and then the city council for approval.

This isn't about "the environment", this is about collecting all of those dimes and handing them out to unions and contributors.

When plastic bags are banned, I'll just get a big box of brand-new ones from Arizona or something and keep on using them. Gotta have something to pick up dog poop with!

It IS about the environment (regardless of naysayers' comments and protests by Republican business owners), as cities across the U.S. are working harder to reduce waste that ends up in landfills (and our oceans).