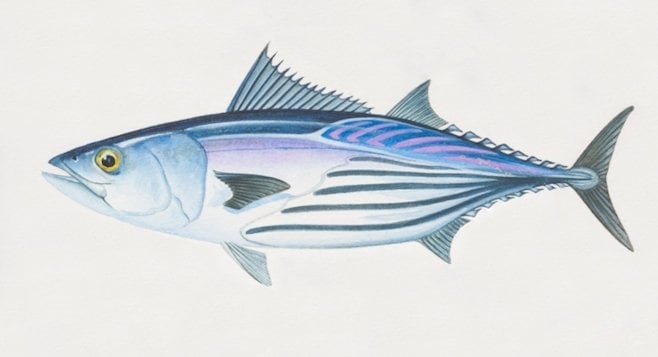 There are still some schools of large bluefin tuna around, though the yellowfin are taking center stage in the dock counts. Dorado are still being caught in numbers I have never seen within two-day range right up to just outside the local kelp. A few bigeye tuna were caught in July and, though I haven't seen any since, it doesn't mean they aren't out there.

Yellowtail are inside, off the kelp edges and canyons, and outside on paddies hanging with the dorado. Bonito have moved into the inshore area just off the coast in good numbers and size. These guys are a toothy, smaller genus of tuna that fight hard with a fast jerking run. Many anglers release them as unfit for table fare, and rightfully so if they aren't going to be consumed. The same is sometimes said of skipjack tuna.

Personally, I find bonito and skipjack very tasty if preserved and prepared correctly. As bonito can turn "mushy" in the sun, these fish should be bled immediately after catching them and stowed on ice.

Skipjack will hang in there a little longer, but all fish should be stored properly out of the sun, on ice, or in a refrigerated hold asap. As with most saltwater fish, do not rinse fillets with fresh water unless necessary and only right before entering the pan or grill.

I love bluefin and yellowfin seared or sashimi style but my favorite bonito or skipjack is smoked. I use a brine of basically equal parts brown sugar and Kosher salt, say about a cup of each per quart of water.

Cut the fillets with the skin on to manageable 4- to 6-oounce pieces, cover with brine in a large bowl, and let marinate for 18-24 hours in the fridge. Other spices can be added to the brine for taste, but I usually just pat the fillets down with some peppercorn as I put them on the rack. Or, for a different taste, I baste them occasionally with teriyaki as they smoke. Place the fillets on the rack skin-side down. Whatever type smoker you are using, try to keep the temp on the fillets about 110 degrees and use mesquite (or your preference) chips every 45 minutes to an hour. Smoke them to the desired consistency...usually 4-6 hours for tender, up to twice as long for jerky. This recipe works great for any tuna. Enjoy!

Chubasco 2 Sportfishing sent 29 anglers out on the briny aboard 1 boat and reported 2 yellowtail, 108 yellowfin tuna, 36 skipjack tuna and 4 dorado caught.

6 boats carrying 139 anglers out of Point Loma Sportfishing returned to the dock with a total of 197 yellowfin tuna, 5 bluefin tuna, 1 sheephead, 22 rockfish, 70 dorado, 37 yellowtail and 28 skipjack tuna in their holds. There was also a striped marlin caught from the Daily Double fishing a 3/4 day trip.