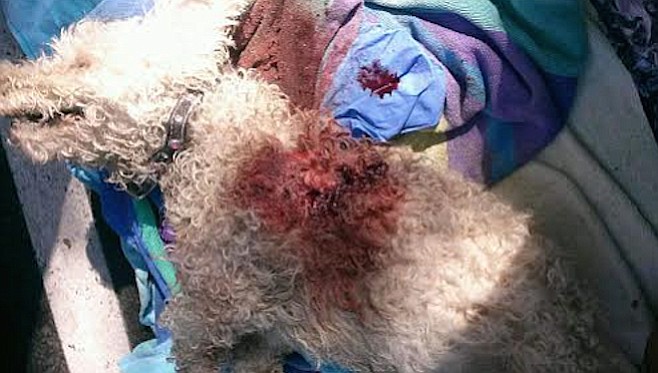 Regina Lovato liked to take her Maltipoo (Maltese-poodle mix), Aria, and her blue pit bull, Yates, to Ocean Beach’s Dog Beach nearly every afternoon. Since Aria was attacked and killed by a black Labrador-retriever mix on Monday, August 24, those visits have come to a halt. 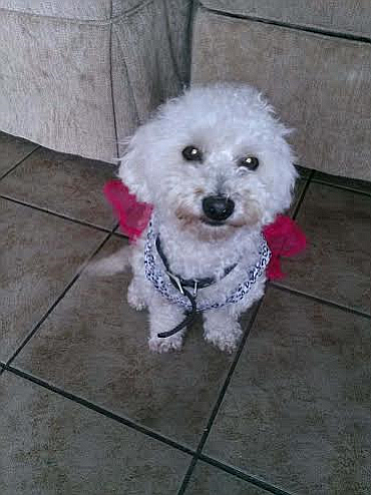 Aria, ready for the beach

“The attack happened at around 2:10," says Lovato. "My boyfriend and I were a few feet away, coming out of the water when it happened. Aria was on the sand waiting for us to get out of the water. As we were getting out, a dog came from the left-hand side. He picked Aria up in his mouth. He grabbed her from her back. He had a really good grip on her.”

The owners of the attacking dog, Lovato, her boyfriend, and a handful of beachgoers tried to get the dog to release its grip on Aria.

“The dog wouldn’t let go, says Lovato. “He was using her as a chew toy. The more we tried to pull the dog off, the tighter it gripped onto Aria.” According to Lovato, it took three to five minutes to get the attacking dog to release her Maltipoo.

“Someone shouted that we should pinch the dog’s snout. When the owner pinched its snout, a few seconds later it released Aria.” The fluffy white poodle fell to the sand. Beachgoers offered up their towels to soak up blood and cover the dog’s wounds.

“I am pretty sure her bones were broken because she was really soft in that area.”

A bystander carried Aria across the sand and through the parking lot to Lovato’s car while Lovato ran to the nearest lifeguard tower for help. 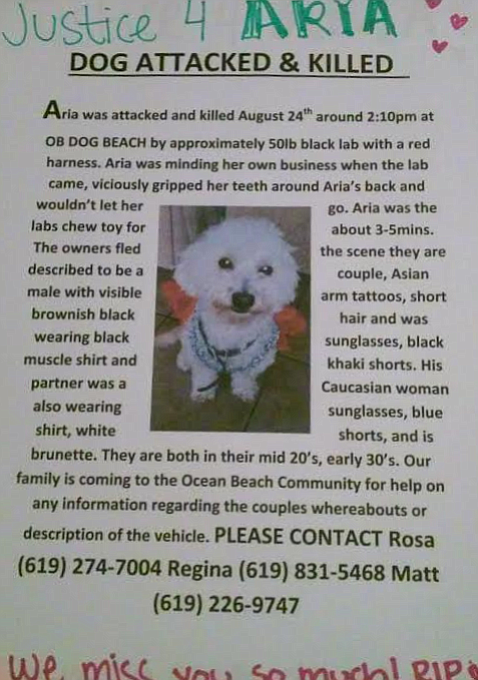 The hunt for the killer's owners begins

“When I went up to the lifeguard window, I was covered in blood. It was all over me. I said, ‘Is there something you can do? My dog is dying.’ He basically said since it was a dog and not a person, it was a civil matter and he really couldn’t call anyone. He gave me a number to the vet hospital and said all he could do was call the lifeguard [supervisor].”

Lovato ran back to her car to check on Aria. In the parking lot she saw one of the owners of the dog that had attacked hers.

“I thought he was putting his dog in the car to come back to where we were to help, but that didn’t happen — they just left. They drove away,” Lovato recalls, her voice bubbling with sadness.

Back at her car, the lifeguard supervisor pulled up to offer Lovato his assistance. By that time it was too late — her dog was dead.

“They took down a description of the owners — an Asian male in a black muscle shirt, sunglasses, and khaki shorts, short brown hair, and a visible arm tattoo. A Caucasian woman with brown hair in white shorts and a blue shirt. A black Labrador retriever wearing a red harness, possibly a pit bull mix. Since I didn’t have more information — a license-plate number, names, or phone numbers for the owners — they stopped writing the report.”

Other beachgoers dialed 911 but the police never came. Lovato was told nothing could be done.

Apart from the tragedy of losing her dog, Lovato is struggling with the idea that the owners of the other dog left without offering their assistance.

“I was too busy trying to help my dog to speak directly to the owners of the Labrador. My boyfriend spoke to them. The first thing that came out of the owner’s mouth was, ‘I’ll pay for it.’ My boyfriend was, like, ‘Pay for what?! What do you mean?! Things like this shouldn’t happen. If your dog isn’t friendly, you shouldn’t bring it to Dog Beach.’ The owner said it was the first time he ever brought his dog to Dog Beach.”

Lovato started a GoFundMe page to cover the cost of burying her dog.

“I had Aria since she was a baby. She was two and a half years old when I got her from Second Chance Rescue. She was my little buddy. I thought Aria was going to make it. I was talking to her. I thought she would live because she kept moving her legs but I guess that was just her saying goodbye.”

Unless I'm mistaken, this incident is getting plenty of local coverage on radio--and likely other media. Yes, these dog attacks are apparently just civil cases (the law sees pets as property, not persons.) If she can identify that Asian dude and white GF, and with this publicity that's likely, she can sue his a** off, and the GF, too. (That can be much more unpleasant and costly for a perp than a mere citation from a cop, and a small fine.) With more and more dogs, and more spots like Dog beach, there will be more cases of such attacks and sad outcomes.

Why "possibly a pit bull mix"? Oh, yeah, because that fits into the narrative better. it couldn't have been a Lab mix, it just COULDN'T... it HAD to be a terrible, vicious pit bull!

If you see such a situation again, force the attacking dog into and under the water. The attacker will release its victim as it will want to breathe. I witnessed just such an attack at OBDB and this is what it took to free the victim, and fortunately to a better outcome.

My condolences to Aria's owners.