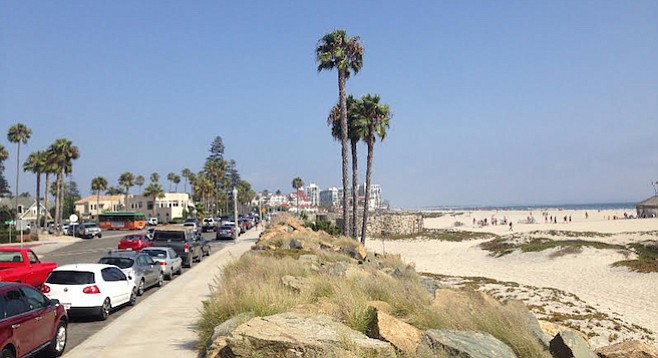 The Coronado City Council unanimously voted last week to reconsider its allocation of $100,000 to study the possibility of a multi-use bike path along Coronado’s Ocean Boulevard.

More than 100 people packed City Hall for the August 18 meeting, the vast majority attending to voice their displeasure at the possibility of adding a bike path to the beachside street. When mayor Casey Tanaka asked members of the crowd to raise their hands if they opposed the study, an estimated 80 hands shot up; only 3 people publicly supported funding the study. 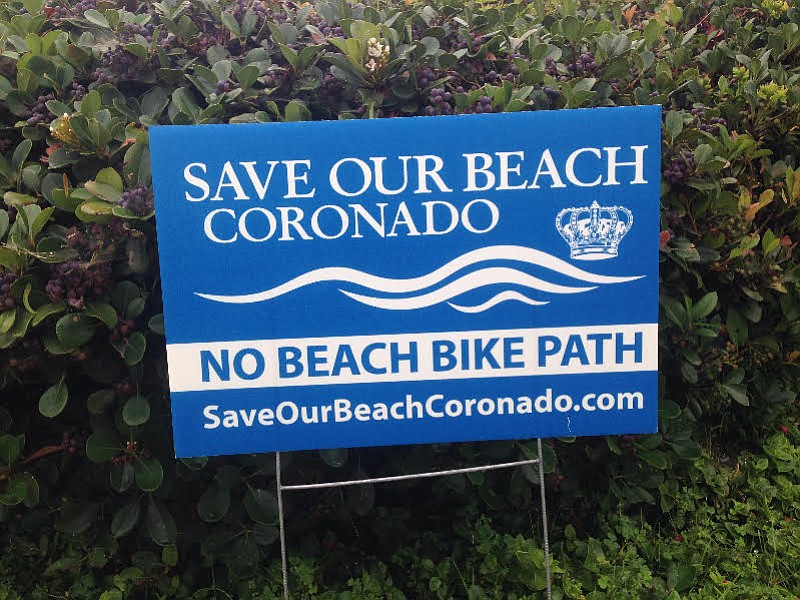 The protest signs that have appeared since June are "not a normal occurrence," said the mayor.

Since the city council voted unanimously in June to spend $100,000 on a study and environmental impact report to determine the feasibility of a bike path along the beach, residents have protested on social media and written dozens of letters to the Coronado Eagle & Journal. One group of locals even printed and distributed blue yard signs reading “save our beach” and “no beach bike path.”

“I want to point out that the vote was unanimous because the council was not saying ‘Build it!’, the council was saying ‘study what is possible,’” said Tanaka at the meeting. “In the intervening months of July and now August, I think I can speak for the rest of the council when I say we received at least 100 emails. I would say the vote tally is something like 95 to 5, against.”

In response to the measures taken by Coronado residents, councilmembers Richard Bailey and Carrie Downey proposed that that the council reconsider the allocation of funds at their next meeting.

The Coronado residents who spoke at the meeting were primarily concerned with relieving the congestion along Ocean Boulevard and reducing the possibility of accidents while keeping the beach pristine and able to be enjoyed by future generations.

While Bob Lindsay opposes the bike path, he believes that something must be done about the volume of people and cars on Ocean Boulevard. “Every year, there are more cars, bikes, and people, and is there any doubt that the congestion will increase in the future? It’s bound to,” he said. “I travel along Ocean Boulevard almost daily and in the summertime, weekends and holidays, Central Beach is jammed and traffic violations are abundant. The time is now to plan for a more a crowded future.”

Coronado resident Kelly Sarber has spoken to both older and younger groups of Coronado residents in opposition to the bike path. “We really treasure the natural beauty and I think that most of us would say that’s why we’re here — we think that’s unique to our island,” she said. “I think that we’re all willing to share it with the masses of people that are pouring in and I don’t really think we need to do anything to attract more people here…. There’s only a finite commercial aspect that we should be promoting.” She urged the council to vote to protect the island’s natural resources in order to avoid the resort-like atmosphere of Manhattan Beach and Venice Beach.

Another major concern of the residents was the legal implication of a new bike path. Sarber, an environmental project developer, spoke to the council from both a personal and legal standpoint.

“I’ve done an analysis of some of these bike paths, and I can say that you’d probably be in a very ironic position if you did proceed with the bike path,” said Sarber, who says he has developed about $2 billion worth of projects. “The city would have to legally defend itself with taxpayers’ money against a good piece of the citizenry that are opposed to this process.”

Other citizens brought up the possibility of cyclists injuring themselves by skidding on a sand-covered cement path and suing the city for negligence.

Resident Jean Gowsel explained that the bike path along the beach is an element of the Coronado Bicycle Master Plan developed by the Bicycle Advisory Committee and adopted by the council without the community’s understanding of its full impact.

“The Bicycle Master Plan is a game-changing proposal which will deeply affect the quality of life for Coronadoans into the foreseeable future,” she said. “With ever-increasing hordes of tourists and population growth, Coronado will desperately need unpaved, open space. Already, Andy Hanshaw of the San Diego Bicycle Coalition is advertising the Coronado Bayshore Bikeway as ‘San Diego’s Premier Bike Attraction’ with ‘the potential to become the quintessential place to ride a bike nationwide.’” Gowsel implored the council to “vote to keep the beach pristine for our children and grandchildren.”

Morgan Miller, a local cyclist and father, said that he felt the bike path would be a move in the right direction.

“When [my family] first moved here, we used to ride a lot along Ocean Boulevard, but now it’s one of my least favorite areas in Coronado because of all the traffic and all the tourists,” he said. “You don’t want to be on the street and close to cars, and you don’t want to risk hitting people on the street. There’s really no good place to be as a cyclist.” He said that getting cyclists off of Ocean Boulevard would make the whole area safer and encouraged the council to move forward with the study.

Coronado resident Nate Shike said that the pedestrian and car traffic along Ocean Boulevard was extremely unsafe and voiced his support for the study.

“I think a lot of people are really worried that a bike path is going to be a racetrack for cyclists or bring people here in cars from out of town to ride their bikes,” Shike said. “I don’t really see any of that happening…. I think that the current situation is a huge safety issue for the area. I definitely support moving forward with the bike path.”

After hearing the opinions and concerns of Coronado residents, the council voted unanimously to reconsider the allocation of funds at its September 1 meeting.

“Obviously, the five of us are stunned that we voted on something in June that has had this much backlash,” said Tanaka. “If you care about this issue, my advice is to stay involved. Keep talking…. In less than two years, myself and Mike Woiwode will be gone and two new councilmembers will be representing you. Make sure that they care about this issue as much as you do.”

The solution to any congested area is to eliminate cars. If a convenient place to park is provided then people will come to enjoy the walkability of an area. As for a "multi-use" bike path there is no such thing. Bikes and pedestrians do not mix.

"The solution to any congested area is to eliminate cars." That would also eliminate most of the people visiting the island along with the tourist dollars the city depends on.

The solution to any congested area is to eliminate cars.

Eliminate cars from high traffic congested areas by building off street parking and providing shuttle service. Of course if you just eliminate cars no one will come.

Where would you propose that off-street parking be built in Coronado?

Coronado is already a bike friendly city! Bicyclists and pedestrians aren't getting injured or killed at some significant rate higher than anywhere else.

The beach doesn't need to be altered to improve things.

The City said they wouldn't use the path in front of the Hotel Del for anything other than bike or pedestrian traffic. They routinely allow commercial vehicles on it to load/unload. The same thing will occur with a bike path on the beach. The bike path idea is a 'trojan horse' waiting to allow commercial vehicles to load/unload for parties, weddings, events on the beach. The City knows this but aren't saying anything. They created bike committee to work on this path to hell, to also make money from it by allowing more and larger events on the beach.

The beach is already being ruined by beach goers littering the beach with fires directly in the sand, by dumping hot charcoals in the sand. The City has in municipal code this is illegal but they do absolutely nothing to enforce it, or anything at the beach for that matter.

Building a path on the beach will only increase ease of getting BBQs and fire receptacles out on the beach, all over the beach, and as things are now the City cleanup crews and complete lack of law enforcement won't be able to meet those demands. And no, this City of Coronado will still have their head in the sand by not increasing staffing needs to meet the demands.

There is two years worth of documented evidence proving beyond a reasonable doubt that the sand is being ruined permanently, found at http://coronadocleanbeach.com and https://vimeo.com/user20445263. Sand is absolutely not compatible with charcoal or fires. Forests are though, they actually benefit from char. Sand does not benefit from char in any way, shape, manner or form, it just makes it ugly and look dirty, which is what is happening on Coronado's Beach. The same thing is happening to other beaches.

The hordes of people coming out the beaches today are atrocious in their behavior towards keeping it clean. These are many of the same people that will be coming out to use the bike path that creates greater access to all areas of the beach—BBQs will be wheeled out, wagons will be pulling the same along with party fixings. They trash the hell out of it, and fires and BBQs do not mix well. Building this path on the beach will only increase traffic to the beach when the City can't even reasonably care for it to preserve its natural state in the first place. This beach trash issue is happening on many coastal beaches. I know this may sound like a sidebar to the main issues of the bike path but overcrowding and irresponsible use must be addressed.

The beach needs to be preserved in its natural state. No bike path on the beach, no more fires or BBQs, keep it natural, keep it clean. People will enjoy it just the same without either. 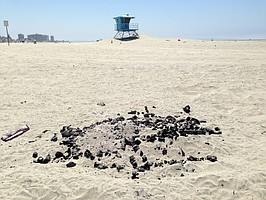 This happens every single week from April through to Mid-October! Stop lighting fires in the sand people! by CoronadoCleanBeach