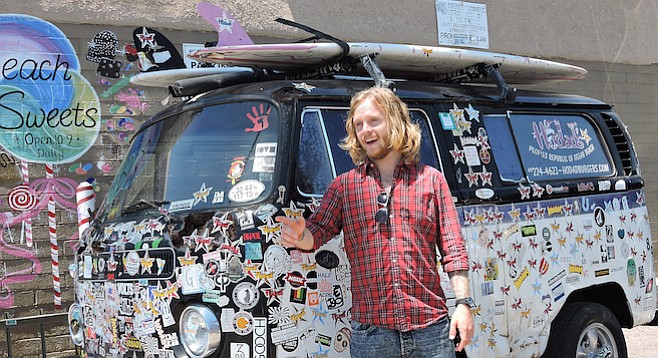 On August 5, I eye two men from outside Hodad’s in Ocean Beach (they also have a downtown location). They polish off their bacon doubles beneath a painted mural of a burger surfing the curl with a hodad hitchin’ a ride on a bun. When I ask where they’re from, one replies, “Imperial Valley. We drove 170 miles ’cause we had a taste for a Hodad’s.” 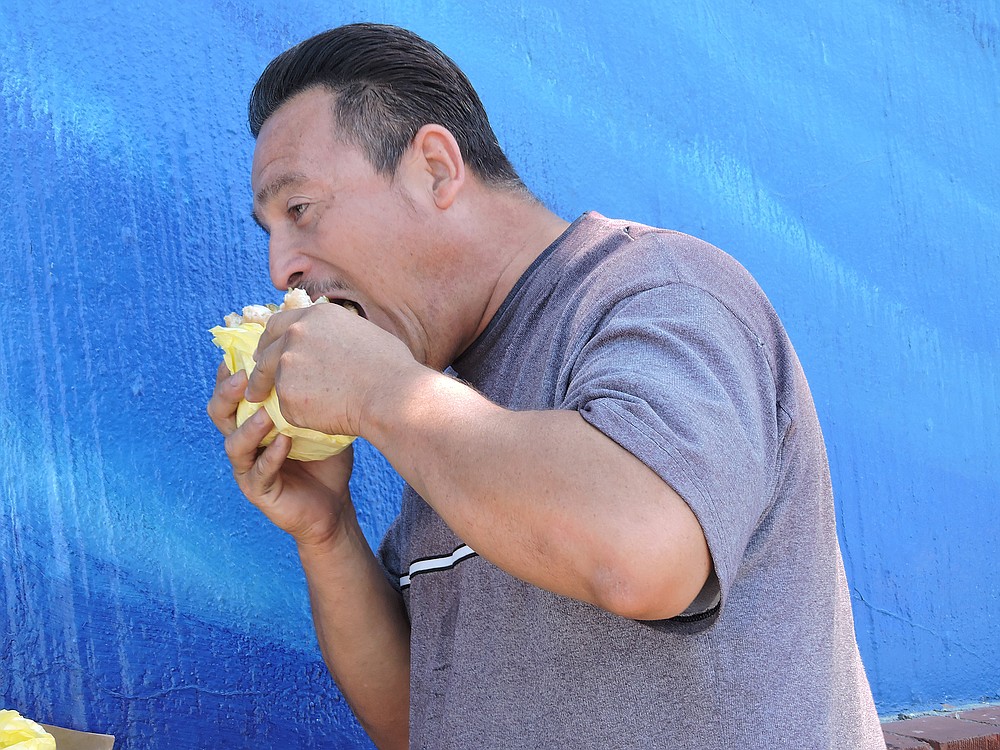 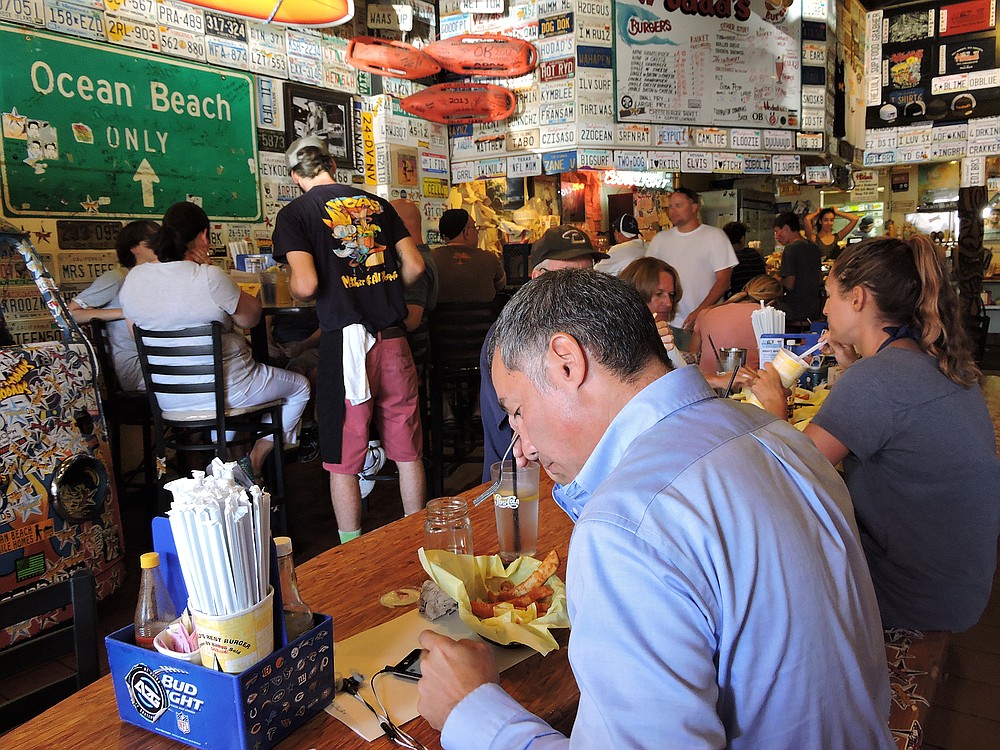 Come for the burgers, stay for the license plates...

Shane meets me at the entrance and introduces himself. His demeanor: mellow, self-assured, soft-spoken, with a hint of shyness. A beard covers his young face, hidden in part by his shoulder-length strawberry-blond hair. His eyes are the color of the ocean and he’s grinning.

In the adjacent parking lot sits a purple, black, and white VW bus with six feet of cabin cut out of its middle. It’s got rust holes, is covered with stickers, has a Hodad’s logo on the window, and old surfboards on top. I ask, “What’s the story behind the bus?”

“Fifteen years ago, VW John hit up my dad. ‘I’m selling this bus. I’m thinkin it’s worth nine.’ Dad thought he meant $9000 and turned him down but found out the price was $900 and made the deal. It’s a shell now. The salt has gutted it. It just sits.” Shane talks about restoring it and makes a note to call VW John.

We slide through a line of people that stretches down the block. Bossman’s philosophy, “It’s not life or death, it’s lunch or dinner,” is evident at the front door, where surfers, tourists, and bikini-clad locals stand waiting to wrap their mouths around a humungous burger. This dive draws a crowd before they open their doors.

Inside, surf tunes of the Sonics, Surfaris, and Dick Dale play loudly. Jeremy Diem, general manager for the past 12 years, joins us at a table for four. He insists I order anything I want. “We’re going to treat you like a rock star,” Shane says.

Jeremy describes his relationship with Mike and now Shane. “I took care of anything Bossman needed. I was his right hand. Mike always said he’d live to be a 112. He made it halfway.” I ask how Shane has changed since the death of his dad. Jeremy replies, “Shane’s been here from the beginning. You can see now he walks a little taller and greets more people. He’s learning the business.”

“It’s exactly six months to the day since my dad’s death,” Shane says. He talks about his transition from son to boss, his concerns of taking over responsibilities from the guy who pretty much invented the job. “I take it one day at a time. My dad’s job was to be himself. He always said, ‘Hodad’s my livelihood, not my life.’”

Before leaving, I ask for a scoop, some kind of insider information. Shane scratches his head and says, “You know the Blue Jay burger you ordered — the one with blue cheese and grilled onion?” Shane looks around the room as if he has a secret and says, “It’s named after our downtown landlord, a super amazing guy. His kids’ names all start with ‘J’ and they love blue cheese! They scored free Hodad’s for life.”

“There’s one more: I’m throwing out the first pitch at the Padres game on September 30, my dad’s birthday. We’re renting five suites at Petco Park for our employees, and we’re closing our restaurants to celebrate his life.”

This isn’t the only time a Hardin has thrown out the first pitch, but it will be the first time Shane, as owner of Hodad’s, has taken the mound.

Love Hodads. You go Shane. Keep up the good work.