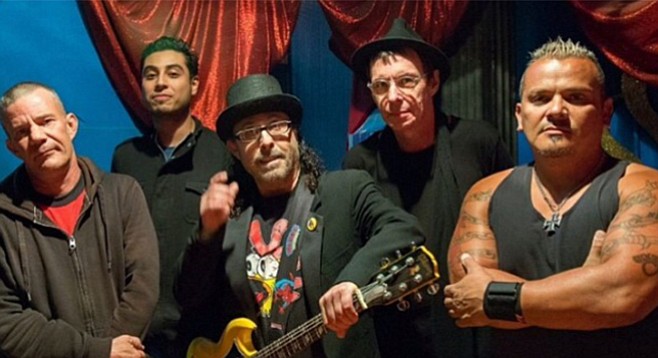 That August 13 fire sale was at the Jumping Turtle and a surprise to the bands scheduled to perform at the venue near Palomar College.

Three of four members of metal band the Bloodline were coming in from Chicago to launch their national tour at the San Marcos bar on August 22. It was to be the first date of their tour. “I was real bummed we had to cancel the show,” says the Bloodline’s lead singer Travis Neal of Oceanside. “It was my girlfriend’s birthday. It really screwed us up.”

Neal says he decided to pull the plug on the show when Jumping Turtle owner Matt Hall would not return his phone calls.

“I heard that the reason he was putting everything up for sale was so he could buy new equipment for the new Jumping Turtle,” says Neal.

There is no new Jumping Turtle location says Department of Alcoholic Beverage Control (ABC) director Melissa Ryan. “It takes four to six months to move a license and we have heard nothing from them.”

Ryan recalls that Hall once attempted to sued her, the ABC, and the City of San Marcos after the Jumping Turtle lost its live music permit after what was described by sheriff’s deputies as a “near riot” at the bar in April of 2009. At the time deputies said the bar had received several complaint calls over a period of months. The suit was dropped and the Turtle was allowed to resume live rock.

Over its decade as a live-music showcase, the 250-capacity Turtle had hosted nationally known headliners such as As I Lay Dying, Mitchy Slick, TSOL, Green Jello, and Sprung Monkey.

The person who may have been thumped the hardest by the Turtle news was Kelly English, guitarist for local band the Infidelz. He said he put down a $2000 advance to secure pop-punk vets the Dickies to headline a September 5 show at the Turtle, which included his band as an opener.

“I knew I should have moved it when nobody was there to see Rat City Riot when they played there in July,” says English. He says he tried to meet with Hall a number of times. “But every time I went there to talk with him he never showed up. I sent him an email that said ‘The place is in auction. Tell me what’s going on or I’m moving the show somewhere else.’”

The Reader’s attempts to reach Matt Hall were not productive.

“I was warned by many people that no one who ever worked at the Jumping Turtle ever left on good terms,” says Joe Troutman, who booked many of the national touring bands when he was at the Turtle from 2005 to 2009. “And, boy, were they right.”

The Dickies/Infidelz show has been moved to Brick by Brick on September 5.