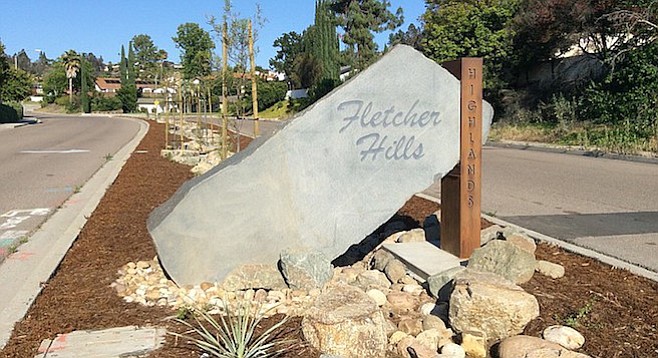 It took 40 years to lay out the welcome mat, but the west side of Fletcher Hills finally has a spruced-up median at the intersection of Valley Lake and Fanita drives. The Valley Lake Median Beautification Project was a collaboration between the Fletcher Hills Highlands Association and El Cajon City Council. 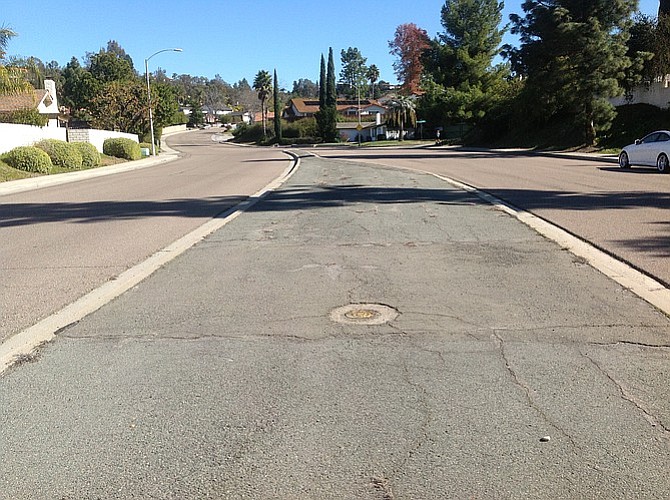 Formerly a blank slab of asphalt, the approximately 324-foot median will now bloom with native trees and plants, and includes a four-ton granite block sign.

Homeowners Karen Torrance and Judith Toepel got the ball rolling a few years ago when they approached the Public Works Department. They were turned down due to limited budget. Torrance wrote letters to all five city council members and then got a call saying “the city manager wants to approve the project and push it forward,” she said.

Torrance made a presentation to the councilmembers and they took $17,000 from the general fund to help with the cost of a new water meter in October 2014. The homeowners’ association put up the rest of the $66,000 cost.

The job began last December with the contractor tearing out the asphalt. In March of this year, the contractor began installing a root barrier, a solar-powered irrigation system, and a bioswale to capture rainwater.

The landscape design was done by Greg Rubin, author of The California Native Landscape: The Homeowner’s Design Guide to Restoring Its Beauty and Balance. He chose drought-resistant natives including three types of manzanita (Franciscan, John Dourley, and sunset), small Engelmann oaks, desert willows, and Cleveland sage. The sage, manzanita, and willows will have purple and pink flowers. The plants have been mulched with redwood bark.

Although the landscape cost is listed as almost $39,000, Torrance explained that figure includes the design, labor, cost of water meter not covered by El Cajon (meter $20,700 total), and everything else except the sign ($6350). The rest of the $66,000 cost came from the homeowners’ association’s general fund. The association will also pay to maintain and irrigate the median.

The pièce de résistance is the four-ton granite slab, for which Toepel and Torrance went shopping at a stone yard.

“I looked at one the size of a Volkswagen,” Torrance said, but it was too big to easily transport. The selected smaller rough-back slab was trucked in via flatbed and hoisted into place using a crane. Industrial artist and designer Tim Spann fabricated and installed it. Torrance and Toepel chose the “Fletcher Hills Highlands” letter font.

The homeowners’ association presented a certificate of appreciation to El Cajon City Council on July 28.

Fletcher Hills is an area of El Cajon/La Mesa developed by Ed Fletcher, who with a partner also developed Grossmont, Mt. Helix, and Del Mar in the early 1900s. He donated the land upon which the Mt. Helix cross sits. He was instrumental in the creation of Lake Hodges and completed many road projects as well. Fletcher served in the California state senate from 1934–1947.

Actually this slab is nothing more than a piece of advertising for Fletcher Hill Highlands. Fletcher Hills encompasses much more area than this one residential community. No one traverses this road unless they live there. If one was to advertise Fletcher Hills there are many places that signs could be put to let people know they are in Fletcher Hills. "Native trees and plants" translation: Scrub brush and weeds.

If medians are to be be decorated at all, relatively immovable objects like huge stones and big trees should be avoided, as they are hazardous to texters, drunks, other bad drivers and their vehicles. There should be no irrigation and the absolute minimum of maintenance requirement, which is possible with "scrub brush," which, with a properly designed and constructed water-harvesting swale, will reduce runoff and flooding by interception, metered flow, infiltration, and percolation.

What Clarke prefers to refer to as "scrub brush" can actually be a pretty good option, especially when it grows just high enough to aid in water retention and is combined with locally-available cobbles or gravel can provide better aesthetics and even reduction in headlight glare and something crushable when cars "drift" into the median, possibly preventing them out of opposing lanes.

The thing about "scrub brush" is that it has the ability to grow here without irrigation, thus saving water (not to mention the cost of meters, irrigation systems and maintenance) on the order of at least a million gallons per year per acre. There are at least a hundred different plants that many people insist in writing off as "scrub brush" (which doesn't actually mean anything), and many of them are not ugly.

The near-zero need for maintenance means that exposure of crew exposure to injury and death also is minimized. Better yet, install barriers that keep cars out of opposing lanes entirely. Costly? Relative to what? What's a life or a severe injury worth?

Beauty is in the eye of the beholder. Like fire hydrants. phone poles, utility boxes, etc. this slab will now become a target of the drivers you mentioned. Erect it and they will run into it. Your comments on scrub brush and maintenance are right on. We just have to get over having green everywhere.

What I'm getting at here is the kind of thinking that underlies how we get to decision points.

This is a good example because it is small.

Actually, this project is a giant leap forward, at least as far and good intentions and political reconciliation go. "Using" native plants, for example, an idea that has been around for at least a century, is finally getting a little respect. But we have not asked how far we have to go with what I call "integrated thinking." I forgot what Hyman Rickover called it--if he called it anything. It has been called other things, like "brainstorming," "THIN(K)," "zig-zag thinking," “Gestalt box thinking” and a few other terms that escape my mind right now.

Those great idea-generators have been replaced by formulaic pat assumptions under the rubric of "best practices," (BPs) a now-popular concept conceived by lazy minds, for lazy minds. Assembling the widest possible array of alternatives under the concept of context and relevance flies in the face of BPs that freezes rather that frees good minds to swarm all over an issue, concept, or problem, and yanks the sheet off the mind-bound a$$holes who shun all other ideas except those clinging to their own hang-ups.

We got to the moon through brainstorming, for example, and we wouldn’t have as nearly flawless a nuclear submarine navy as we do without Admiral Rickover’s insistence that ever staff work product contain minority reports.

Surely, deciding what to do with a space between opposing lanes of traffic would benefit from consideration of as wide as possible a range of relevant alternatives according to each context (no standard specifications, please) as possible. My cynical side is telling me that someone probably had to fight pretty hard to get native plants and a drainage swale into the project. Let’s wait and see what kind of feedback we get and whether or not the wise folks in charge will do any kind of complete analysis to complete the loop rather than casting a single concept into BP concrete.

In all fairness, however, I must add that, after reviewing the location more thoroughly, I suspect that there is relatively little likelihood that anyone might get killed by running into the stone, because it is at a T intersection. I don't know what the speeds are along that stretch, but I will give the benefit of the doubt to those responsible in that regard.

I do believe, however, that the bark or wood chips are not a good idea, as they will stimulate weed growth and require "refreshing" as part of the overall maintenance. It seems to me that using Poway conglomerate or similar large, rounded, heavy ancient river stones from the area all the way to the curb instead.

When work is being done in the median, I hope there will be steps taken to minimize hazards to workers, such as coning off, say, four feet of the roadway during the work.

Aesthetically, however, the stone propped up by a wooden device is pretty silly-looking. Maybe they tried other positions and it looked too much like a headstone? Still does, unfortunately.