Two roads diverged: is there anything really worth seeing in Tinsel Town? 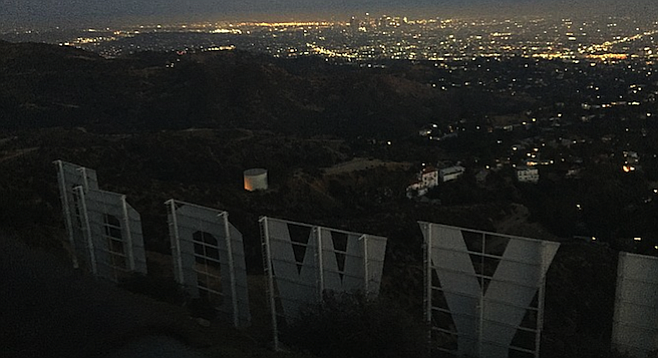 Written on an open Word document on my computer in a $30 Budget Inn motel room in Glendale, CA. The walls are lavender, and the money saved from not spending the night in Hollywood is neatly folded in my pocket.

One of the greatest things about living in San Diego is that it is not Los Angeles.

Somehow, we San Diegans have struck gold with our immaculate cliffs, beautiful surf and breezy canyons void of celebrity-crazed tourists and aggressive Dodgers fans. As we sip the foam off our Ballast Brewery craft beers and lounge in the quiet of a Sunday afternoon in Little Italy, the mind may wander and ask, “Why would anyone want to live in Los Angeles?”

Well, if Los Angeles is hell, then Hollywood’s the devil commanding the flames. Thus comes the next question: “Why would anyone want to go see Hollywood?”

Destination: Hollywood, the Crossroads of the World 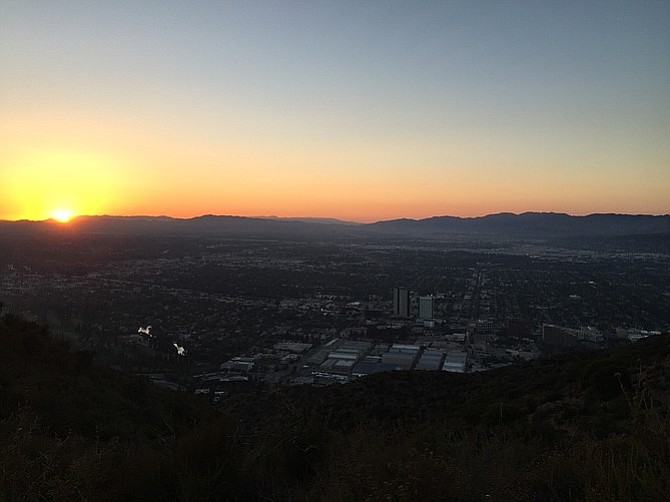 A different view of L.A. Looking north to Burbank from the Cahuenga Peak trail.

Getting to the "true" Hollywood

We native San Diegans have all been there at some point in our young, sun-bleached lives, but I went this time around wanting something beyond the glitz, the ads and the tabloids. I wanted to discover the true Hollywood – beyond Madame Tussauds and the celebrity-stalking bus tours.

Everything that’s supposed to happen in Hollywood happened. From San Diego, we took the good ol’ 5 all the way up to the 101 and exited onto Sunset Boulevard. We left around 10 a.m. to beat the San Diego traffic and managed to bypass the northbound lunch rush in Los Angeles as well, so...

Tip #1: if you’re used to waking up for your Los Angeles outings before the dawn’s early light, spare yourself. Go ahead – roll over, prop up those cool, Egyptian cotton pillows and get a couple hours more of shut-eye. This is the time to go.

Tip #2: From the 101, the trick to avoiding Hollywood tourist traffic is to exit Sunset Boulevard and head west. You know you’re headed in the right direction if the massive, cerulean blue Church of Scientology blocks the sunshine for a couple of seconds. Hollywood Boulevard is better walked than driven anyway. Besides, there are often secret little residential streets filled with free parking in between Sunset and Hollywood Boulevards.

So, once again, spare yourself the extra 10 (at least) dollars. Exit early, brave the blue towers of the Church of Scientology and park on some shady residential street near Hollywood High School.

Tip #3: The best way for a San Diegan to travel to local getaways is to bring non–San Diegans. Want to know just how good you have it? Bring a couple of Irish girls and watch them dry out in the SoCal sunshine from a lifetime of being soaked in the rain. 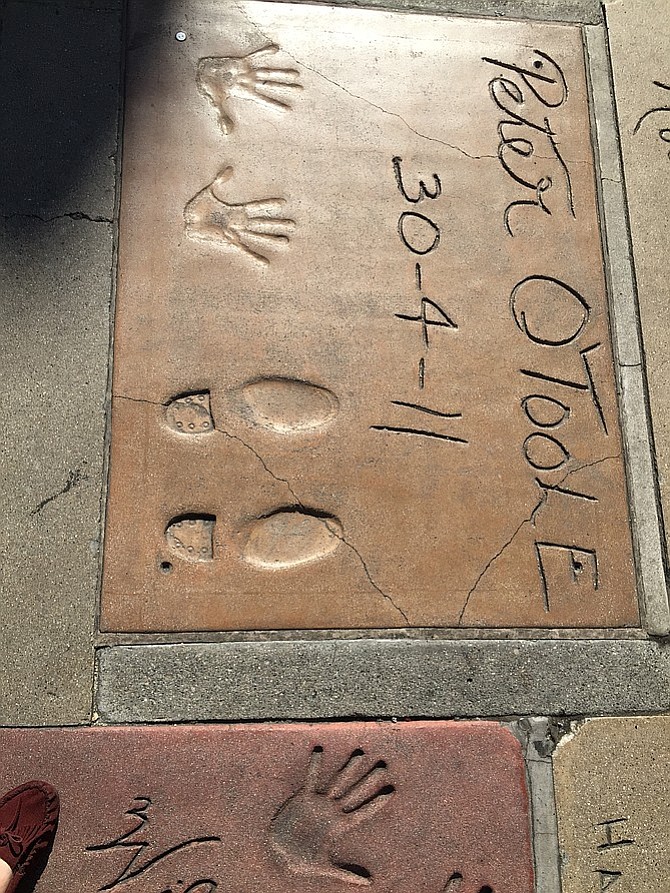 The shoe prints of my hero on the Walk of Fame. The closest to starstruck I'm ever going to get.

The mid-afternoon Hollywood sunshine baked us into the cement like one of the stars on the Walk of Fame, but we didn't mind. I put my hand in my hero’s hands at Grauman’s Chinese Theatre (Peter O’Toole’s, if anyone’s wondering) and suffered the crowds in search of Daniel Radcliffe, Emma Watson and Rupert Grint’s wand-imprints from their Harry Potter days.

My Irish friends and I finally became a little heat-stricken in our search and decided to replenish our fluids at a handy-dandy Johnny Rockets located right there in a shady archway of the mall attached to the iconic theatre.

Our waiter, a UCLA grad student, refused to charge us for our two ice teas, lemonade and side of fries because he thought our order was “stupid.” He also knew that it was 105 in the shade that day, so I think he pitied us. In case you thought Hollywood was a cruel, cutthroat stomping ground for superficial personalities and celebrity drama, think again. Spare yourself of those negative thoughts and enjoy your free French fries to the sound of early '50s doo-wop.

Conveniently enough, as is only right in Hollywood, we had a bird’s eye view of a red carpet arrival for a movie premiere. The movie was Pixar’s Inside Out and the red carpet was actually Barney purple – very cheerful, and very convenient for two Irish girls desperately wanting to simply have a glance at a movie star on Hollywood Boulevard.

Now, I don’t like the notion of celebrities (I was even fired from a job once for not treating a celebrity like a demigod…but that’s another story), but when Amy Poehler waltzed onto that purple carpet like the best friend you never had and Mindy Kaling billowed in behind her in a cape that made her look like a queen, it was quite the show, and I thoroughly enjoyed the idea that I live so close to something people fly 5,000 miles from Dublin to experience.

I gave both Amy and Mindy a nod for being two incredibly strong women in a sexist, ageist industry, then I turned and looked up at the next adventure – the one I'd come to Hollywood for. Yes, maybe four miles away and a thousand feet overhead was the Hollywood Sign: the forbidden fruit of Tinsel Town. I had wanted a piece of it for a long time. 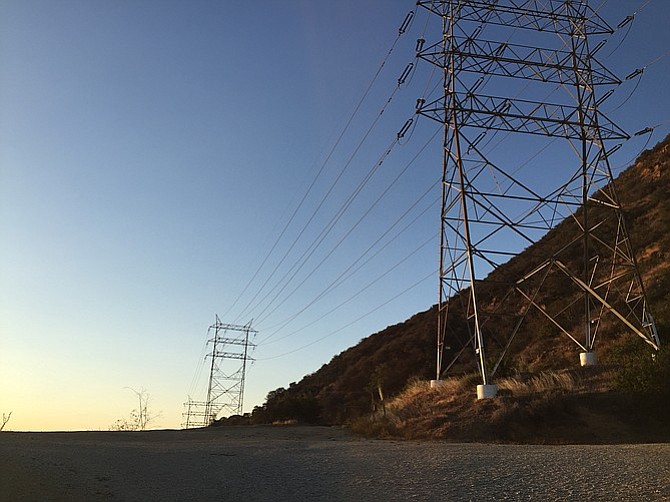 For any of you looking to escape the stars into the stars, this is how you do it. The first step is to go to hollywoodsign.org/hiking-to-the-sign and pick your route. I wanted to sweat but not die, so I chose the 5k loop (which, in retrospect, turned out to be the most difficult of all the loops, despite being the shortest), the Cahuenga Peak Hike to the Getty Ridge Trail. I don't regret choosing this trail for an instant, however. It was one of the most beautiful hikes I had ever done – and I've hiked all over the world. It also helped that we were hiking at sunset.

The Irish and I piled into our Eurovan and began ascending a curvy residential road between Hollywood and Burbank to just outside the Hollywood Reservoir. We ended up parking right outside a brand-new and absurdly modern mansion with free residential parking. Two bald men and their schnauzer were scouting out the place. We watched them coo at the tall, beautiful windows and patios, and then looked up at the hills, our companions for the evening. 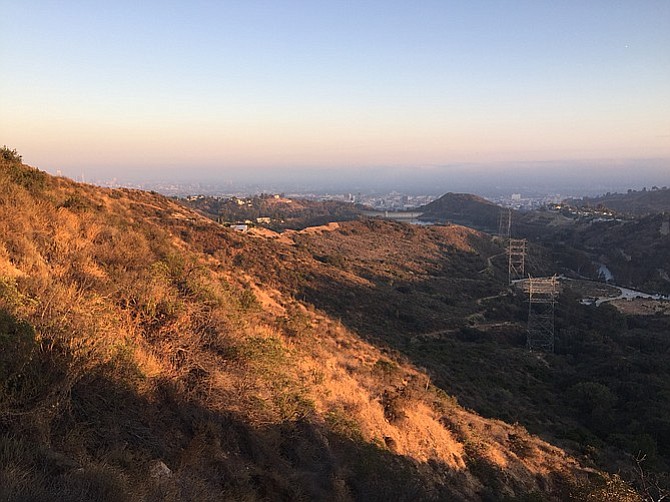 Near the start of the Cahuenga Trail, overlooking Hollywood Reservoir.

There was no other way to go but up, so up we went. The sun sank faster in the sky, and the gum-blobbed pavement of Sunset Boulevard seemed miles away. Up through the Manzanita trees, brush and dirt.

Up. Up for what seemed like hours – hours of pure delight, surrounded by an orange-ombréed sky. Up. Curving round one hill. Another hill. Is that the sign? No. The sky was turning deep pink to match the flush in our faces. Up. Up and then, we reached the top: not the sign, but the top of some hill adjacent to the Hollywood sign, and everything stopped moving.

The sky was now an unreal red, and the world around us was quiet. There was nothing like it. My Irish friends were now just extensions of the mountain’s silhouette. My camera refused to acknowledge more than two colors, blood red and shadow. We paused to catch our breaths. 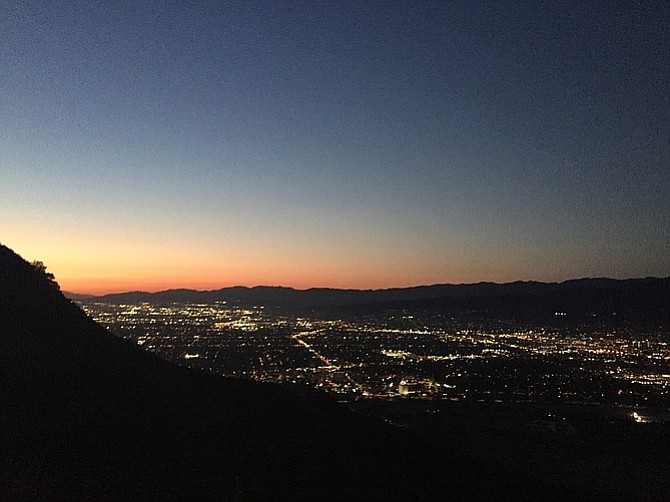 Burbank lights below the evening sky.

When we reached the sign, it was almost dark. The Burbank streets on the left lit up with twinkly criss-crosses from boulevards that ended on the horizon. The city of Los Angeles on the right finally opened up through the smog and dazzled the haze away.

Hollywood had picked a prime piece of real estate for its crown, and there it was. Low in the sky at first from the Hugh Hefner Overlook. Then we got closer and beheld the iconic D-O-O-W-Y-L-L-O-H (Except the D and L’s were backwards) and became silent again, lost in thought as we took in the moment.

It’s a great thing when that which is manmade reflects that which is beautifully not of this world. I'd lived a mere two hours south of this very spot for my entire life. I had hated the glitz of Los Angeles, retreating to San Diego's backyard, Sunset Cliffs or the Cuyamacas, for natural fulfillment – but now here I was – fulfilled as ever, smack-dab in the middle of Hollywood.

I had finally taken the road less traveled by, the one that only San Diegans with a hankering for a Hollywood beyond the boulevard could discover on a random day trip. I breathed in again and sighed, “So this is where you’ve been hiding, Hollywood,” and it made all the difference.

Great story: did you heado to Pink's for a dog after that, or perhaps Dupars? 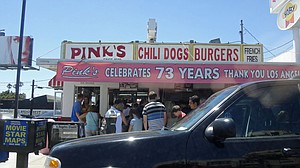 You needed to hunt for the batman bat cave not far from the Hollywood sign. Two San Diagains experiencing the Hollywood dream. Fun times. Love the article!

I lived in Hollywood/West Hollywood for years, and always enjoy a return trip. But I wouldn't live there again. It's so much better down here! Here's a long shot of the wonderful HOLLYWOOD sign I took two years ago. 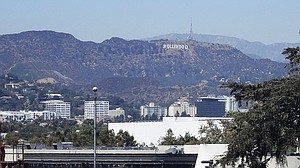