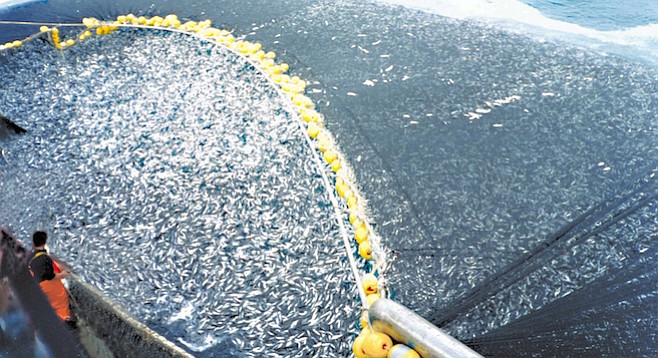 A federal judge this week upheld over $1.5 million in fines levied against several San Diego-based tuna fishing vessels for violations of rules implemented in order to prevent over-fishing.

Captains of the Sea Quest, Ocean Conquest, Ocean Encounter, Sea Honor, and Pacific Ranger, along with the American Triumph of Tampa, Florida, had challenged fines related to rules banning the use of purse seine net fishing on "fish aggregation devices," defined as "any man-made device, or natural floating object, whether anchored or not, that is capable of aggregating fish" during certain periods between 2009 and 2011. Specifically, one of the rules prohibited the use of lights on the water to attract fish.

The captains of the vessels, and their owners (all of the San Diego boats show different limited liability companies as official owners, but all list the same Broadway mailing address downtown) argued that the lights were turned on for safety, a claim rejected by judge Colleen Kollar-Kotelly, noting that the Sea Quest's captain was on record stating that the lights "were used at least partly" to keep fish in place while nets were set.

The assessed fines, of which more than $950,000 were assessed the locally owned boats, cover a total of 19 National Oceanic and Atmospheric Administration rules violations and five more violations of the Marine Mammal Protection Act.

The American Triumph, hit hardest with $562,000 in fines, was accused of attempting to bribe official observer Jason Morikawa with $440 cash in the hopes he would fail to report violations. Kollar-Kotelly also rejected claims that the payment was a misunderstanding, in which vessel owners argued "the money was not a bribe but rather was 'happy money' that the fishing master regularly gave to crew members for good luck."