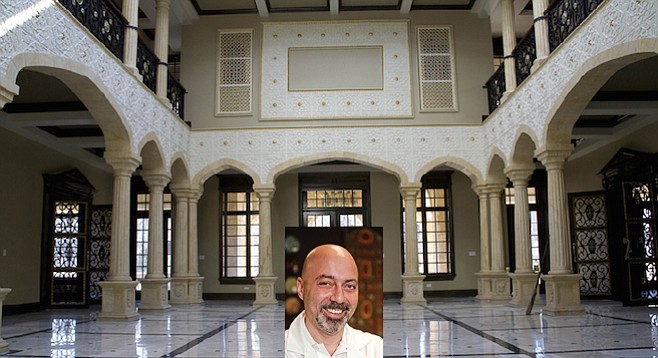 On July 27, El Cajon dentist Husam Aldairi filed a suit in federal court against Gus Dahleh. According to the suit, Dahleh "has contacted [Aldairi's] wife and falsely informed her that [Aldairi] had engaged in sexual relations with other women outside his marriage." Dahleh allegedly had wanted to engage in an illegal Chicago real estate deal with Aldairi, who had refused.

Aldairi's time in Chicago was one of ups and downs. According to a decision of a judge in his bankruptcy filing, Aldairi had at least eight dental offices in the Chicago area and owned 13 residential buildings, mainly in upscale areas. He had a condo in Miami, Florida. He began making the newspapers in Chicago because of his 45,000-square-foot estate on 4.5 acres in Burr Ridge. He named it "Villa Taj."

It was in the neo-Byzantine Moorish revival architectural style, with a gold Jerusalem limestone exterior, according to the Chicago Tribune, which said it was "Middle Eastern-influenced." As it was being built, some neighbors complained to Burr Ridge officials that it looked like a mosque. Aldairi said it was a tribute to cultural integration. He complained that building inspectors kept delaying its construction. "He went overboard building it," says his San Diego lawyer, Joseph Samo, who filed the suit against Dahleh.

At one time, Villa Taj was listed for sale for $25 million. It was foreclosed upon, and ultimately sold by a bank for $3.1 million.

A female employee filed a sexual harassment suit against two of Aldairi's employees — not against Aldairi — and that helped precipitate his downfall, which was exacerbated by the Great Recession of 2007-2009. I asked him if he planned to set up a string of dentist offices similar to what he had in Chicago. "I am not financially capable of doing that," he responded.

He filed for bankruptcy in 2008, but U.S. bankruptcy judge Jacqueline P. Cox of the Northern District of Illinois ultimately ruled that he had filed for bankruptcy "for the improper purpose" of delaying court-ordered payments to the victim of sexual harassment. In her official opinion, she said Aldairi's testimony was "inconsistent and evasive" and exhibits were "incomplete, unclear, or simply missing." Aldairi and his companies were "uncooperative and unresponsive" to requests to turn over financial information. "The court observed Aldairi's demeanor and finds that his testimony is not credible."

She dismissed the bankruptcy and imposed sanctions against him and two of his dental units. The judge said he was to pay more than $314,000. His family moved to the San Diego area, and he later came, too.

"I have been harmed enough — unjustly," says Aldairi.

And now he is in El Cajon? Welcome to the third world toilet of El Cajon.

AMAZING,the amount of money some (not all) dentists make.

QueenMe: I am not so sure that the money for all those homes and fancy cars came from earnings generated by 8 to 10 dental offices. Best, Don Bauder

His reviews are poor in Chicago. His mansion flooded with 6 million gallons of water, because there was no caretaker and the water flooded the structure for days before being discovered. That water damaged caused so much damage that the entire building would have to be torn down to the studs. Husam Aldairi and his wife had moved to Florida because they didn't like the cold winters in Chicago.

Husam Aldairi was involved in a business bankruptcy that was thrown out of court because the bankruptcy judge said he was abusing the process; The court found that the Debtors’ Chapter 11 bankruptcy petitions were filed for the improper purpose of frustrating, hindering, and delaying the Movant in the collection of her judgment and imposed sanctions pursuant to Bankruptcy Rule 901." I doubt he made all his money pulling teeth and making dentures. Where did he get his money?

Ponzi: I did not include the part about the flood. The home had already been foreclosed upon by the time that happened.

I did cover the bankruptcy and the judge's opinion of his testimony. He had more than $7 million in debt, as I recall. Like you and QueenMe, I suspect there was another source of his wealth. Best, Don Bauder

Jay Dee: There are no grounds to deport him. Best, Don Bauder

QueenMe: I am not so sure that the money for all those homes and fancy cars came from earnings generated by 8 to 10 dental offices. Best, Don Bauder"

I ain't so sure. A dentist with "an excellent reputation" charged me almost $4,000 for a bone graft I didn't need, and my present one wants a mere $3,500 to screw in a single implant. Every little bit adds up, and at that rate, adds up pretty fast.

Twister: Aldairi told the bankruptcy court that many of his customers were on welfare of one kind or another. That is why he was inordinately hit by the Great Recession, he said. He lived in an upscale area, but his dental offices were generally in downscale locations in the Chicago area. Best, Don Bauder

(I know EXACTLY what you're talking about. A certain rip-off, extraordinaire female dentist in OB, charged me $8,000 for dental work a few years back. ALL of it had to be re-done by another dentist, who urged me to file a complaint with the state board. I did, but lo and behold they sided against me. The reasoning was that I had already had the work re-done, so they couldn't properly determine that it was performed incorrectly. Never mind that it took over a year for my complaint to be considered. What a racket!)

Most licensed "professional" organizations are set up ostensibly to protect the public, when their real mission is to protect themselves. That we, the people continue to put up with this indignity, nay, to encourage it, is one upon what they depend us to put.

"Welcome to the third world toilet of El Cajon."

I find the clerks in El Cajon more polite there than on the coast.

I don't. I find the Arabs and resettled residents to be rude and arrogant. I never thought I would say this, but with Donald Trump bringing up the H-1B issue. I will support him. At least he has one issue that I can agree with and stand behind along with ending this "refugee" BS. The previous mayor of El Cajon resigned because of his un-PC statements. He was just saying his mind. F this arab invasion. It's time for the US to realize this "sanctuary" nation is hurting the people who are the founders. The families that fought the civil war, WWI and WWII. My family goes back to the 1680's. I really am enjoying the fact that a candidate is bringing this previously ignored dialog is being brought to the forefront of the conversation. So sick of witnessing Chaldean and Arab corruption in El Cajon. Yes, Trump is striking a chord and it's captivating tens of millions of citizens who are tired of the status quo. End all immigration and grow our industry and economy with our present population. Stop being a landfill for uneducated religious zealot ignorant nomads. (Don, no need to dignify my comments. I speak for myself and don't expect agreement or acknowledgment. There is a tipping point, and I am at it. I don't care anymore what anyone thinks of me or my opinions. No more PC from me.).

I'm with you on the PC problems, and even on the rudeness of many "ragheads." But neither of us is working from an adequate sample size, and we're both cherry-picking. You focus on "ragheads" and I focus on "rednecks." Neither of us is logical. Let’s settle on the fact that we both like the theater of the absurd . . .

My family goes back at least 10,000 years, at least the "fraction" of it that met the boatload that the other fraction of it, along, apparently, with all of yours, that invaded this country and took it by force.

The part of me that "met the boat," as Will Rogers would say, may want the part of me that invaded to "go back where they came from," but I can't figure out how many pounds of flesh that amounts to. Luckily, that fraction has largely reconciled with their fate and with the sorted history that the "cultivated" hath wrought.

As to so-called "natives" and "foreigners," I'm an equal opportunity hater and lover. I'm more concerned with the "content of their character" than where they came from or their label. Labels like "raghead" and "redneck" are equally repugnant in my mind, but to the intelligent, context is everything--or at least a core concept that should not be ignored, even by the ignorant. No, ESPECIALLY by the ignorant. The other core concept is RELEVANCE, of course. Then integration, integrity. I know fine people, fine minds, who can trace their lineage back to the 17th century and beyond, and I know fine people, fine minds, who fled oppression and have vastly enriched this polyglot culture. I don’t want them deported on Trumped charges—or any other kangaroo court.

“. . . a new nation, conceived in Liberty, and dedicated to the proposition that all men are created equal.” –A. Lincoln Except for the “ . . . huddled masses, yearning to breathe free?” Except for those who lived here from which we took it by force?

Culture is self-righteousness writ large, and while variety is the spice of life, we would be better off as a species if we returned to our social roots.

It's high time we all understood that discrimination is entirely different from prejudice.