Elderly and handicapped at risk on Cowley Way 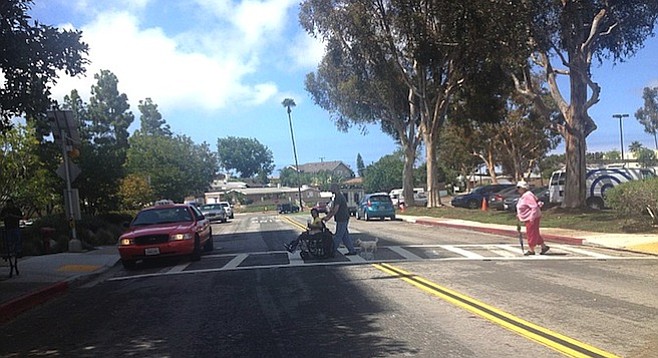 Shortly after hearing about a 77-year old woman who suffered a hit-and-run in La Jolla while crossing the street last Saturday, I saw two Western tow trucks pull up in my neighborhood. I watched one of them tow away a neighbor's red truck. The other one sat for a minute before peeling out and speeding toward the Sorrento Towers crosswalk on Cowley Way. I assumed he had also been sent to tow the red truck, and was a little miffed that he didn’t have anything to actually tow.

This happens every day, all day long. Not with tow trucks specifically, but with just about everyone else. At least half the cars driving on Cowley Way are speeding. And none of them seem to be residents of this block. They seem to be using Cowley Way to bypass Clairemont Drive, where speeding would be much harder to get away with.

This morning, I counted 10 cars speeding within a 10-minute period: a white BMV convertible, a blue/gray Mercedes SUV, an apple red VW bug, a dark green compact Nissan, an old rusted out Ford truck, a dark blue Mustang, an old gold Chevy Malibu, a black Mercedes SUV, a blue four-door Toyota, and a motorcycle. They were all going an average of twice the speed limit of 25 mph.

The crosswalk sits in front of Sorrento Towers, where mostly elderly and handicapped people reside. I know of more than one pedestrian who has been hit by a speeding driver at this crosswalk. I even once saw a kid's bike laying there. I’ve almost been hit a few times myself.

The very long street curves so neither the driver nor the pedestrian can see the end of the street clearly from all areas. And because it's such a long street, pedestrians cross at all points.

Two weeks ago, I was walking my dogs when I saw a dark car come barreling down Cowley Way at what I would guess was 50 mph. The car stopped abruptly in the middle of the street and an attractive dark-skinned female in her 30s jumped out of the car and started frantically examining the back of her vehicle. I asked her to please slow down, mentioning that a lot of elderly people live on the street and that some have been hit by speeding drivers.

She apologized and said, "But you have to understand, someone just hit the back of my car."

Even though I heard and saw no signs of this, I very nicely replied, "I'm so sorry to hear that, but please be more careful and watch your speed."

She apologized and said she would slow down. She then got into her car and made a screeching sound before speeding away even faster than she had entered the neighborhood.

"They were all going an average of twice the speed limit of 25 mph."

Consider factual reporting. Your instincts may be better than mine, but it's very hard for me to accurately assess the speed of a vehicle by my eye while standing on a sidewalk. It may be possible for you to borrow a radar speed detection device so that you can give actual facts in this report. Many people have their own judgements of speed, noise, and other annoyances but facts trump all matters of opinion. They can make for high quality reporting too.

Not quite as fast as on the freeway, but close. They are always louder than those driving the speed limit. Of course, it's just a guesstimate. I surveyed other neighbors that have witnessed this and most of them made guesses between 45-55 mph.

UPDATE: after this article was posted today, I saw a couple of city workers at the crosswalk. They told me there are plans to so something. A lot of people have made calls and sent emails about the speeding problem. Nothing is certain, but there is a discussion of moving the location of the crosswalk and adding lights on both sides of the street to allow drivers coming from Iroquois to have more warning there is a crosswalk ahead.

Also, the police are starting to crack down on speeders all over town by adding signage and speed trackers.

Julie, just who told you that the cops are starting to crack down on speeders? That claim sounds just about as credible as the many reports over the years of how TJ was reforming its police. Over and over, I read about those reforms, and where is TJ today with a professional PD? It's about 1920--oh, that's generous--and nothing has changed Why do you think that the slobberin' city of SD, a sort of TJ north of the border, has made any real changes? How about reporting back in two months and being able to tell us all that the speeding on Cowley Way, or any other spot in C'mont has really changed at all?

Visduh: The SDPD is a very small department compared to cities of the same size. They have a small traffic division so any "crack down" is PR and nothing else. The police are spread so thin that the regular patrol officers have no time to monitor traffic. In the Clairemont area the cops just go from call to call. Moving the crosswalk, adding lights or signage or changing speed limits will not make any difference in the poor driving habits of the average driver.

These problems are common everywhere in San Diego. People speed, don't use turn signals, roll through stops signs, run red lights (don't stop at left hand turns), and tailgate. Is it poor manners, poor driver education? When I learned to drive it was in a classroom setting because Driver Education used to be a high school course. Now we hand out licenses to people that have immigrated here and do not respect, or even know, our laws. I also always see people talking on cell phones, not using hands-free devices because they are too stupid, lazy or cheap to get a hands free set-up.

Well, speeders are less common than the people who think it's better to go about five or ten miles under the speed limit, or who stay in the left lane while going under the speed limit, or who put on their bright lights at night because then it's easier for them to see, notwithstanding the fact that they're blinding everyone else, or who put their brakes on as they go around a curve. I'd just as soon see everyone go fast and get out of the neighborhood than have to wait for two lights because some other person was distracted or too slow. I live on Cowley Way and I just don't see those "speeder" that the writer of the article seems to think are all over. Maybe if you're 89 and a car is going faster than a slow walk, it's scary, but the fast drivers on Cowley are less of a problem than the slow ones on Clairemont.

People who want to willfully drive like maniacs here can easily get away with it, due to the lack of police enforcement. I've seen exactly one person pulled over in the two years I've lived here. San Diego needs speed cameras and red-light cameras like no other U.S. city I've seen.

Bonus: The revenue from such cameras can help pay to fix our crumbling infrastructure.

The SDPD is too small to cover all the areas of San Diego. Red light cameras produce revenue and the majority goes to the manufacturer who installs and maintains them. Most of the time it costs the city to have red light cameras so it is a no win situation.

Sorry to add to an old story but I live on Cowley as well and nothing is being done about the speeding. Its ridiculous because of the elderly at one end of the street and the rest of the street populated by families with young kids and pets. Speeding motorcycles and cars mostly at night and some of them are just a blur as they go by; gotta love those Harleys waking the neightborhood up at 4am. I would love to call the police department to ask for some sort of police presence once in a while or maybe go to a community forum to ask for the addition of a speed bump or two. I like the area but I hate the people who are "just passing through" and 50mph is not out of bounds as far as speculating on speed. I have been behind drivers going at least twice what I was going.