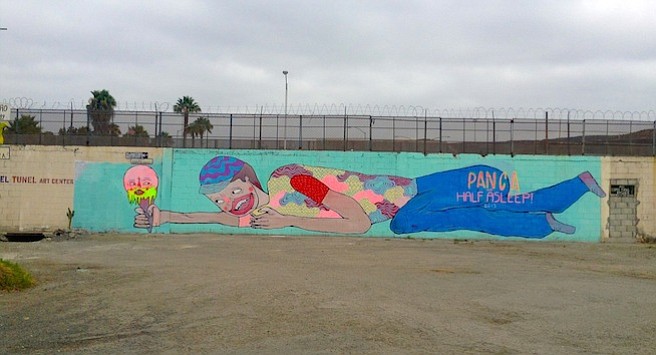 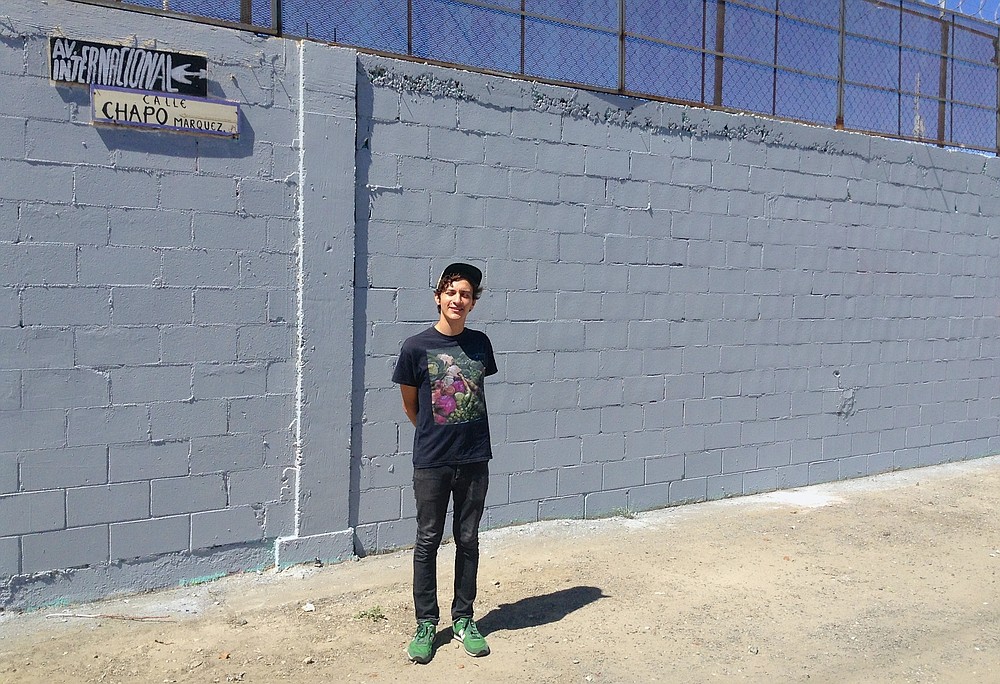 David Peña, standing next to the grey wall

David Peña, who moved south of the border about a year ago with his brother after graduating with a B.A. in art from CalState Long Beach. David teamed up with popular artist Paola "Panca" Villaseñor to work on his first large-scale mural. "Mario, the neighborhood community leader, told us he wanted a mural that represented the area, he wanted something like hands locked in. We presented the design but he didn't like it, so he just said to simply do whatever we want. The design changed a lot; originally the man was supposed to represent an immigrant crossing because of the history of the area, but because of the Doña we added flowers in his hand, and realized she didn't like it at all, so we just made something else. Because we did not want to offend anyone, we painted what was Panca's tamest drawing ever."

For weeks I followed Peña and Panca's constant updates on social media about their mural, eager to see the finished result. Only a handful of people got to see the mural before a neighbor decided that the mural was not welcome. The 50-foot mural consisted of a man lying down holding an ice cream cone. The face of the man, as well as the face painted inside the ice cream, were typical grotesque Panca drawings, while the clothes of the man were completed by David's colorful patterns. The mural, set on a public wall that separates the USA from Mexico in Colonia Federal, was signed Panca + Half Asleep. 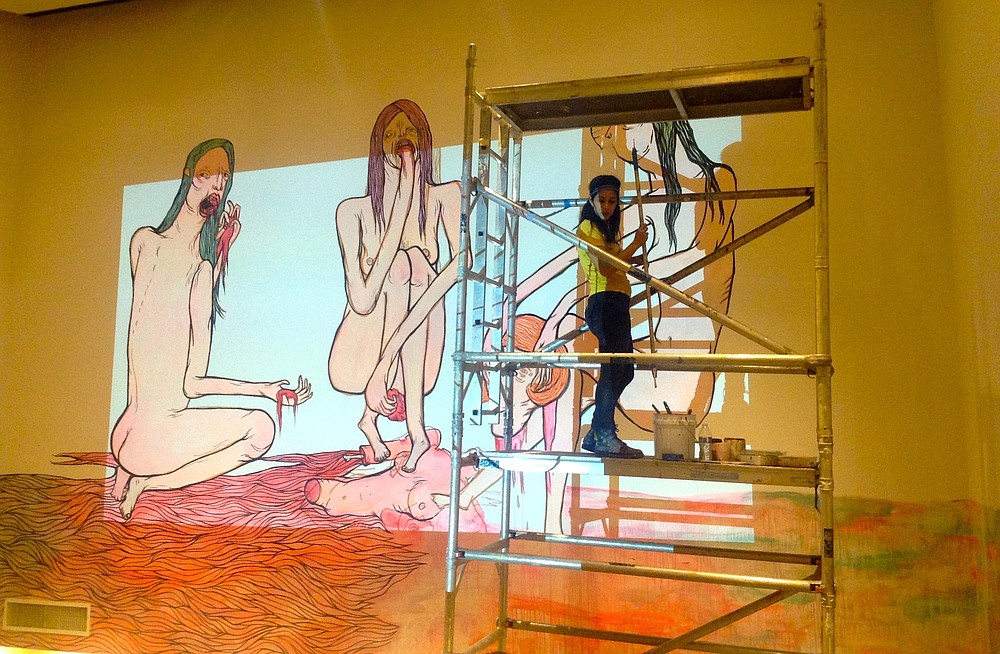 Panca's "The Savage World of Women"

Earlier this year, Panca painted a mural at SDAI named "The Savage World of Women," it consisted of naked women devouring a naked torso, while another ate a piece of fried chicken.

I had a private tour set up for an older married couple from North County on the morning of Saturday, August 1. Since the mural was just recently finished and very near the border, it was our first stop.

"Do you guys have anything to do with the painting?" A lady still in her nightgown came out from a house nearby the mural and started yelling at us. That lady was La Doña that David mentioned. I explained that I was a tour guide and we were simply just taking pictures of the art. "We don't want that here," La Doña continued her rant, "I don't understand why they would paint something that ugly. They should paint something folkloric or a landscape. We do not want Americans painting ugly things. We don't send people up north to paint like this, they should keep that garbage over there, it is not welcomed here." La Doña kept talking to us in broken English, stopping and speaking Spanish when she was lost for words. "No one in the community likes it, I am going to gather signatures and proceed legally so we can erase the mural and paint the wall grey."

I tried to explained to La Doña that the artists were local and recognized talents. She shrugged off my comments and continued speaking her mind. I apologize to my customers for starting a tour with an angry lady yelling at us, and we continued on our way. My clients were dumbfounded as to why someone would oppose art. When a much larger tour with host Turista Libre and the artist Panca arrived to take pictures of the mural a few hours later, the lady did not come out.

I met with David Peña at his art loft to talk about what happened. "We met a lot of the neighbors; many came to watch us paint and told us they were loving it. It was only La Doña who was hating it and opposed it. Even the cops came over, chatted with us, and said we were doing a great job." We took the short walk from his loft to where the mural was.

Pressured by La Doña, Mario hired a worker to paint the wall grey on Sunday. Standing next to where his mural was, the pain in David's eyes was apparent. "I can't believe it's gone. It took us a couple of months just planning the thing and we worked on it for weeks. La Doña didn't even say anything until we were halfway gone. She threatened to erase it, but we weren't going to stop until it was finished. I never thought it would be this sudden."