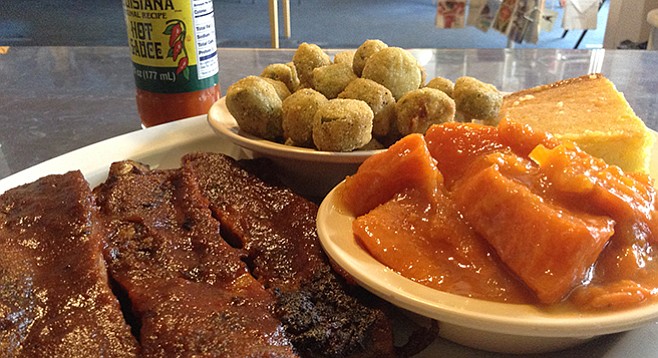 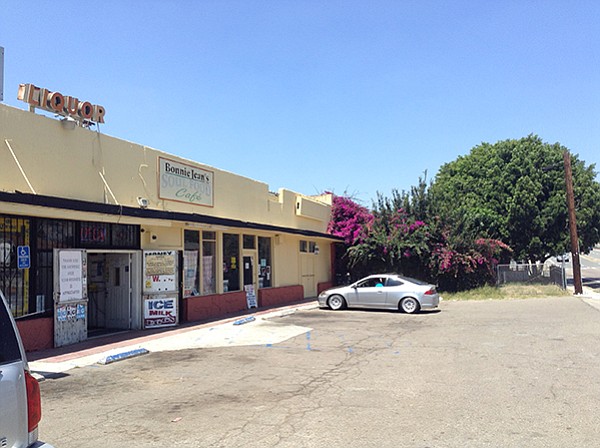 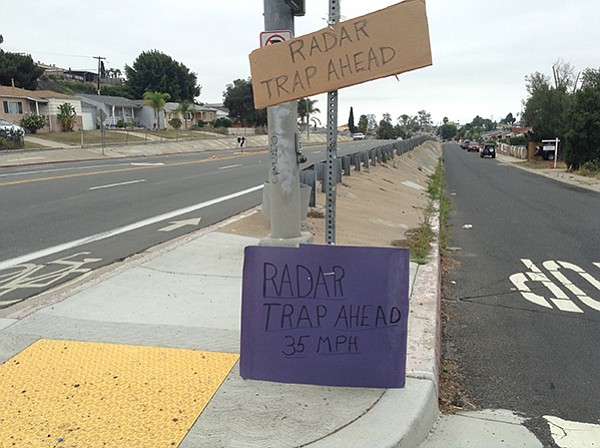 Friendly neighbors warn you as you approach 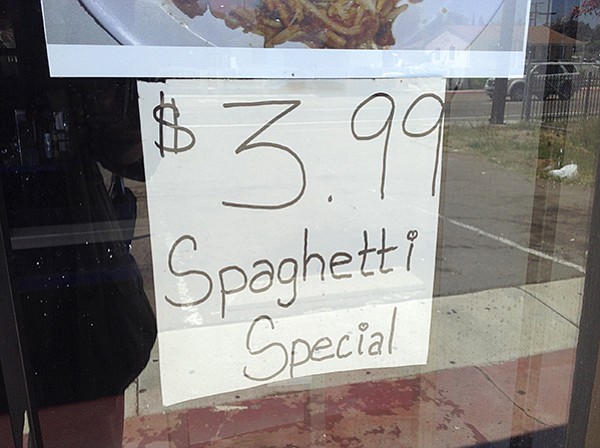 Cheap deal of the day

Instead I just pull the cord and wait while we cruise another country mile up this long hill on the border of Oak Park and Chollas (“Skulls”) Creek. We finally stop where Pirotte Drive crosses 54th. “Radar trap ahead!” says a helpful local’s hand-written warning on a piece of cardboard, “35 mph.”

It takes me ten minutes to walk back down to the sun-bleached sign that caught my eye. It sits on top of a low row of shops, near an incense store called “Garden of Fragrance.”

I mean, this is morning. Eleven. I haven’t even had breakfast. But somehow the thought of ribs and cornbread doesn’t sound weird at all.

And what an inside! Photos, trinkets, paintings line the maroon and creamy walls. And black history: posters of “The Negro Leagues, established 1920.” There’s even an old-looking neon sign reading “Negro League Dugout.” A photo from Montgomery, Alabama, dated 14 July 1931 shows a double drinking fountain. One arrow points left to “White,” another points right to “Colored.”

Huh. It all feels like a cross between a community gathering spot and a museum.

“Is this place open?” I ask a man and a woman, Claude and Nailah. They’re sitting at a table, but no food in front of them. 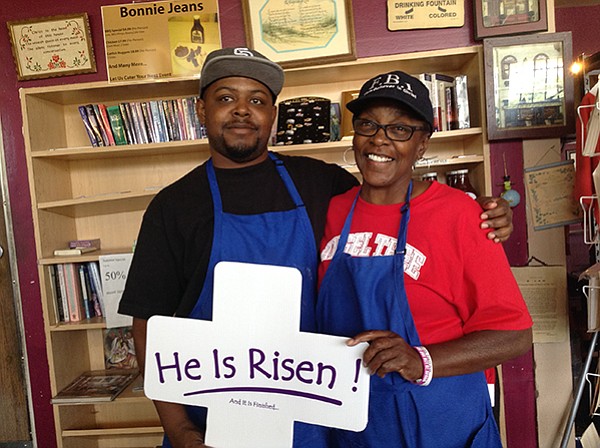 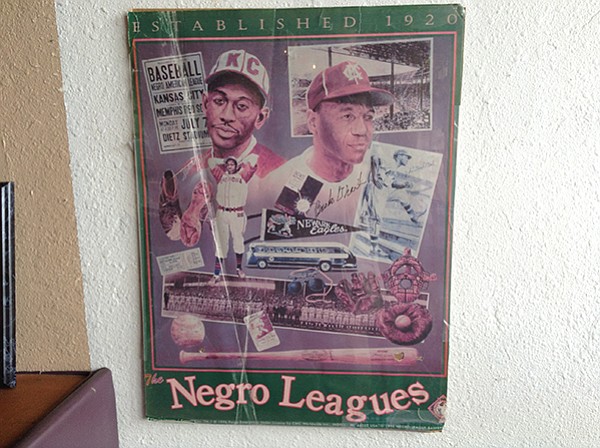 Poster from the not-so-great old days 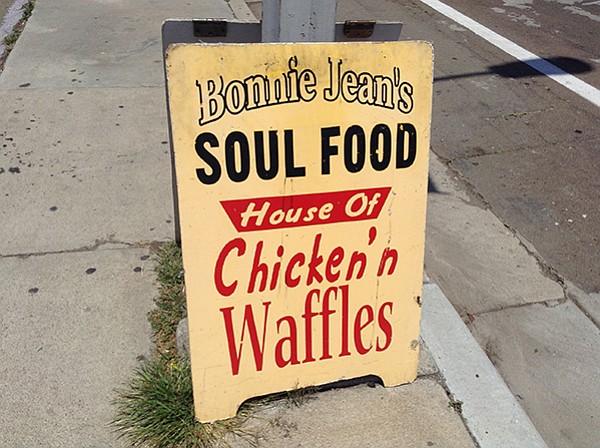 This is when a young guy comes bouncing out through the kitchen door. He has me sit down at a blue Formica table facing a large chess set and the Negro League memorabilia. He hands me a single-page plastic menu.

“Have a look, and I’ll come back and explain anything,” he says. Name’s Kenny.

But they have cheaper stuff. Like, you can get a chicken leg for $2.25, a two-piece chicken basket for $6.95. Or six wings for $5.24. Or southern things like fried mac and cheese balls ($6.99) or, hey, spicy gizzards. Gizzards are the little in-stomach food grinders you get in chickens, as well as in the gut of crocs, dinosaurs, and, uh, earthworms. Kenny says they’re maxo-delicious ($5.99). 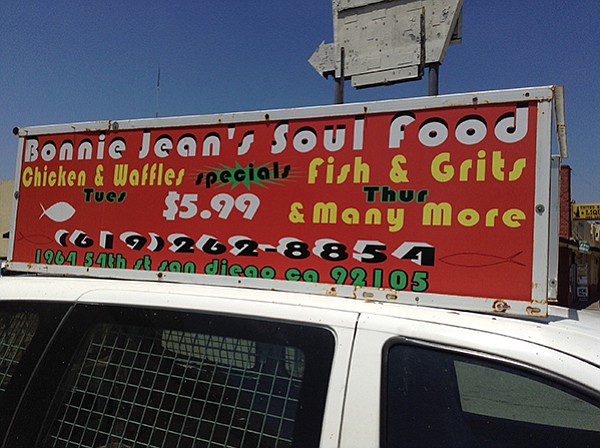 Sign on top of car in front of the restaurant 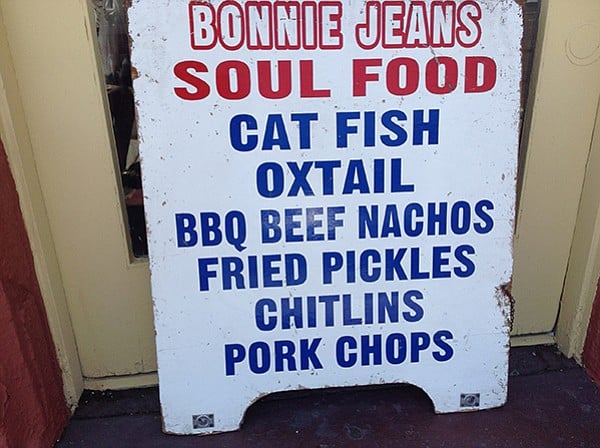 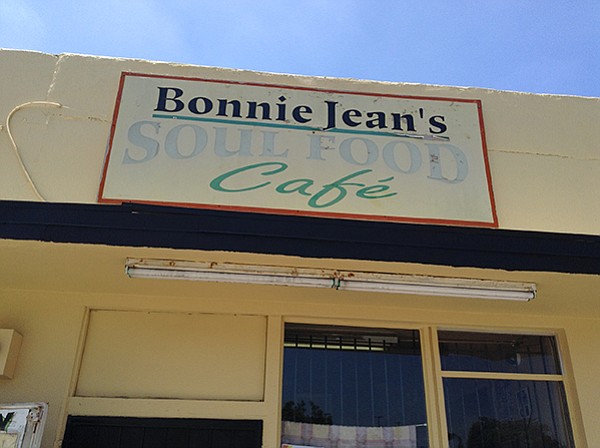 And when the ribs arrive, they are everything I expected. Thick, fat, easy off the bone, juicy, and with such a sweet sauce. It works. Specially when you combine it with the yams I ordered as one of the two sides. That combo of the two sweet tastes is totally made in heaven. A nice honeyish chunk of fried cornbread adds to what you might call the sweetness profile. 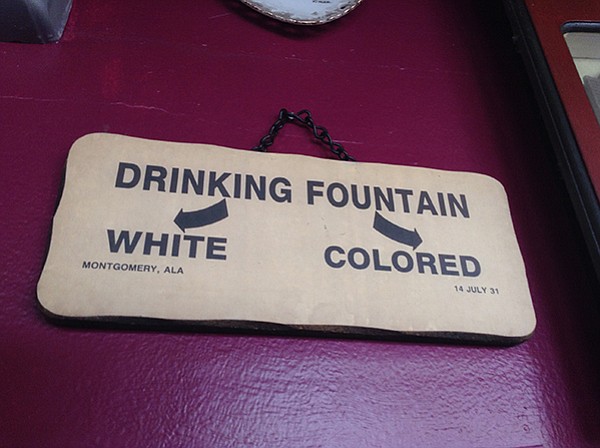 How it was in Alabama 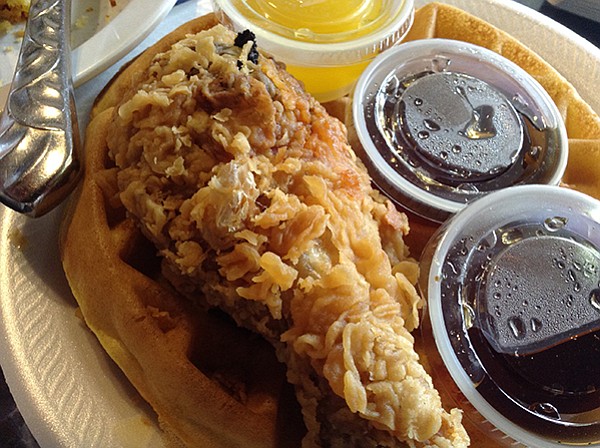 And the other side dish I get is the fried okra balls. Okra? Gumbo, a mallow plant, right? The marshmallow’s first cousin. I splot some of Trappey’s Louisiana Hot Sauce all over them. Result: cuts right through all the sweetness.

“These were positively the best collard greens I have ever had,” says this gal Nailah, on her way out. “They start off tart and savory, but then you get a sweetness coming through. Beautiful.”

Turns out Nailah is a senior pastor at Logan A.M.E. church, one of the crusading churches of the civil rights movement. She is fresh down from northern California. Spent the last month trying to deal with her congregation’s fears and anger after Charleston.

Bonnie Jean herself appears from the kitchen. She’s Kenny’s great aunt. It was her sister Stephanie Luckett who started this place up with absolutely no experience back in 1996. “She died January 18 this year. Heart attack,” says Bonnie Jean. “She was 47. We’ve had a lot to deal with.”

But also good things. Bonnie Jean just heard they’ve been named to a list of the Top Sixty Soul Food restaurants. In the nation. “We were at #9,” she says proudly.

“Wow. Really?” says this much-tattooed customer, Ali. “We’ve got to get a photo.” 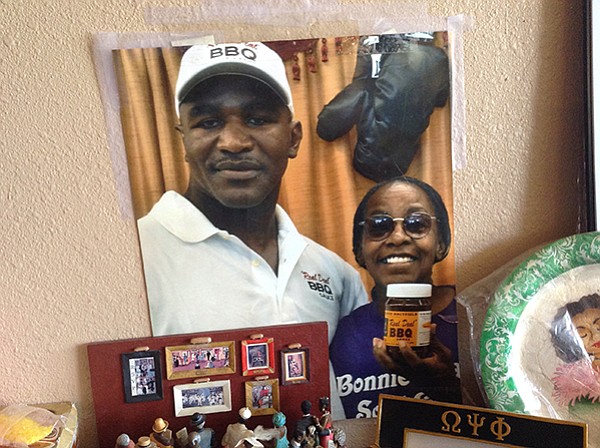 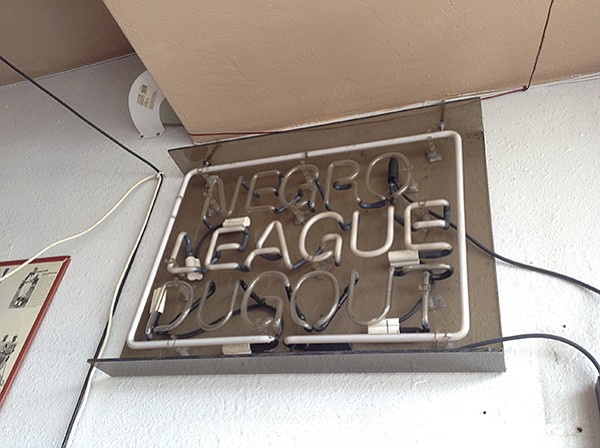 Ali and her boyfriend Chris are down from Santa Barbara. They’ve just had the chicken and waffle. She hands me her iPhone so I can get her and Chris with Bonnie Jean between them. “This will definitely give us bragging rights.”

“Yeah, but what Top Sixty?” says Carla as we have our midnight feast of the chicken and waffle dish I brought home. So I google it. And there it is, on the online outfit called Tea&Breakfast.com who have done this nationwide survey.

Who knew? A nationally recognized restaurant east of 805, south of the 8. Couldn’t have happened to a nicer family.

Ribs sound great! But i wish that the cornbread would be salty, not sweet. So much better. Too much sugar is too much sugar. Really, Kenny and Bonnie jean: try it. Just leave out the sugar - make the cornbread a contrast to the other sweet items. you will LOVE it!