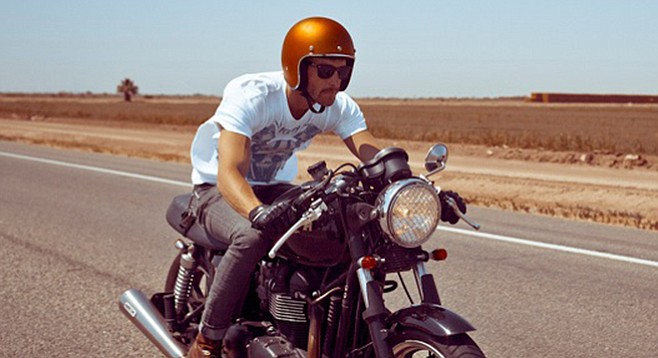 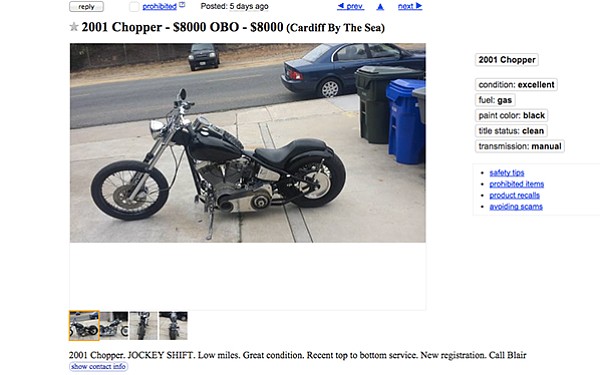 2001 chopper on Craigslist, in Cardiff

What is the typical life cycle of a Hipster fad? You guys don’t usually annoy me. Hey, every group has its own uniforms, totems, and mores. But, lately I’ve seen (heard) a troubling trend for hipsters: they’re riding very loud Easy Rider–style choppers. I don’t mean the Vespas from past years, those are fine. I’m seeing hipsters on the types of bikes we normally see scary, fat, old guys riding on their way to the beach to sell meth. Those guys are annoyingly loud too, but let’s face it, how long are they likely to be around, or on parole? Hipsters, on the other hand, are younger, typically too milquetoast to get arrested, and have at least a couple decades before their pancetta donuts clog an artery and send them to the Great Food Truck in the Sky. Please tell me they’re just renting these noisy bikes until they miraculously gain enough muscle mass to pedal a fixie up a grade. Should I open a gun shop and leather chaps outlet in South Park so they can accessorize, or should I expect Santee/Lakeside to be the next hipster mecca?

Insiders know hipsters gravitate toward café racer-style motorcycles rather than choppers. Perhaps you’re mistaking a vintage CB750 with clubman bars and a one-up saddle for a raked and stretched Shovelhead? Optimized for short, quick runs between watering holes, café racers fit the urban hipster lifestyle much better. When they do go in for choppers, hipsters prefer “metric choppers,” i.e., motorcycles of Japanese origin, so called for being spec’d in metric sizes, also much less expensive to buy and customize than Harleys. Hipsters like three-quarter helmets with candy apple red metalflake paint, regardless of what motorcycle they ride.

Hipsters are ruining the motorcycle scene 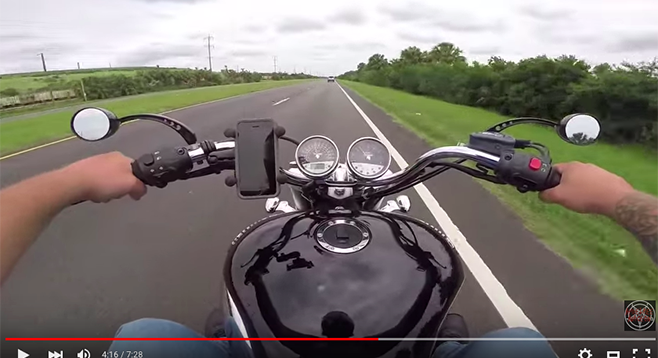 Either way, I can see hardcore biker types being pissed off at hipsters “intruding” on what the bikers see as “their scene.” That’s the nuts and bolts of why people hate hipsters in the first place. Even so, I’m with hilariously salty YouTuber “shadetree surgeon” (not, as far as I know, an actual surgeon), who answers the claim that, “Hipsters are ruining the motorcycle scene” at least as well as I could (I’d never admit to better), saying, “Gimme a fuckin’ break, man. That’s about the dumbest shit I ever heard in my life. Just ’cause somebody’s fuckin’ excited about motorcycles, you gotta shit all over ’em? That’s fuckin’ horseshit, and you’re a dickhead if you think that way.”

If a 250-pound self-described “beer-swillin gut-punchin tattooed and skrewed motorcycle ridin’ son of the south” can give hipsters a break….

But, judging by your characterization of meth-dealing parolees, you’re probably not yourself a leather-clad biker. Or a pancetta donut–scarfing hipster. If I had to guess, I’d say “North County business class bohemian” probably fits best; which is totally fine, since every group has its own uniforms, totems, and mores, so who am I to criticize?

If you want the quickest (and most delightfully ironic) solution to your problem, you should stop hating as quickly as possible. Walk up to the next hipster you see, and tell him how cool his bike is. Tell him you’re thinking about getting one. Perhaps even buy yourself a chopper. People will give you grief (“bought not built!”), but you’ll save a cool $20k. It’ll look great in the parking lot at the Kraken. As soon as you’re into it, I guarantee the hipsters will be over it.