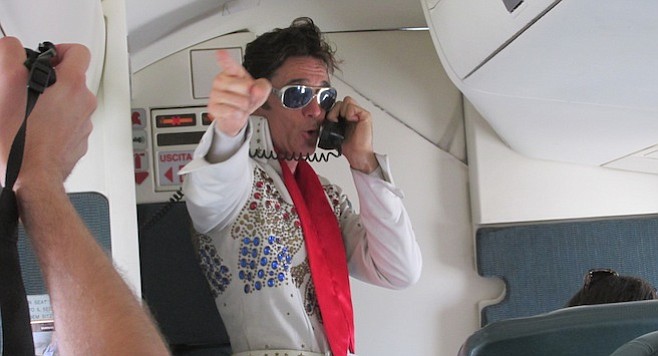 Elvis impersonator George Thomas was belting out "Viva Las Vegas" and other Elvis tunes as a crowd gathered in the terminal at Carlsbad’s Palomar-McClellan airport. On July 30, city and county leaders, media, and paying passengers, were on hand for the inaugural Las Vegas service by North County’s only airline, Biz Air Shuttle.

Folks arriving for the celebration enjoyed breakfast and having their picture taken with Elvis, using a green-screen backdrop of the famous picture spot — the Welcome to Las Vegas sign found on the Vegas strip at the south end of town. Even the TSA officers had smiles on their faces, welcoming the group. 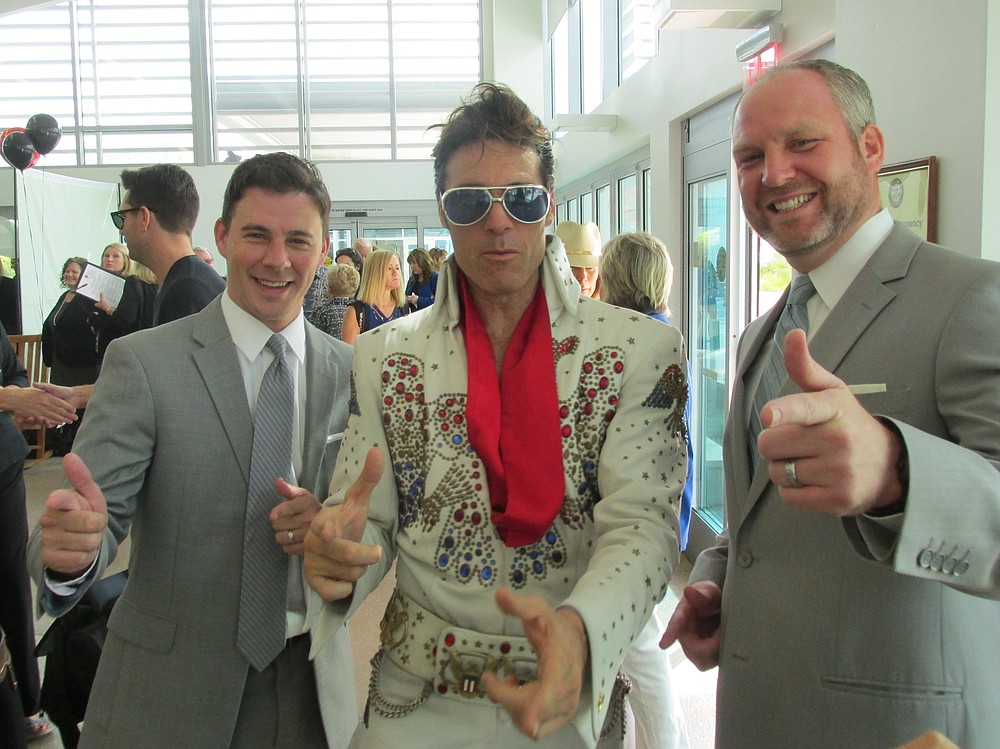 Representing most of North County on the Board of Supervisors, Bill Horn said, “This Sin City send-off is an event fit for a king,” as he and his staff panned for photos with Elvis. Both Horn and Carlsbad Mayor Matt Hall pointed out Biz Air’s promotional fares to Vegas are around $154 one-way.

John Kampfhenkle of Oceanside was the first to board the 10:30 a.m. flight. He paid $530 full fare for a roundtrip ticket — a last-minute reservation. He said the cheapest he could get out of San Diego was $480 round trip.

As a private pilot, Kampfhenkle was planning to fly himself over to Vegas but didn’t think he could fly high enough above the thunderstorms forming over the mountains. That’s why he needed a last-minute commercial flight.

“I fly a lot for business. Being able to fly out of Carlsbad is huge for me,” said Kampfhenkle. “Anything that makes my life more convenient, I’m all for.”

Once in the air, the full 30-passenger Dornier 328 jet took only 52 minutes to touch down at Vegas’s airport, even after having been directed by FAA flight control to fly north along the coast, all the way up to the Orange/L.A. county line, prior to being slotted eastward into Vegas. “They originally wanted us to fly over LAX,” said the pilot. “Its just the way the air traffic is moving today.”

Biz Air’s owner, Dan Cretsinger, took the last seat available on the maiden flight. During the trip over and back, he helped flight attendant Robin Rossi pass out snacks and drinks. “They’re always free on Biz Air,” he proudly advised. So it will be with baggage and reservation changes, no extra fee. The airline also offers free wine, beer, and harder stuff, at no cost.

As the plane began its descent over the California desert into Vegas, Elvis took requests, with an impromptu changing of the lyrics to help promote Biz Air — “Are you lonesome tonight? Catch a Biz Air flight.” He even let passengers, over the PA, complete popular lyric lines of the famous songs. The Elvis impersonator will be aboard several Vegas flights over the next few weeks.

John O’Rielly sits on the county’s Palomar Airport Advisory Board. “Biz Air flying out of Carlsbad is a big economic impact for North County,” he said during a catered lunch for arriving passengers, near the Biz Air gate inside the Vegas terminal. “This will take pressure off of San Diego [Lindbergh Field] and having to drive down I-5,” he added. 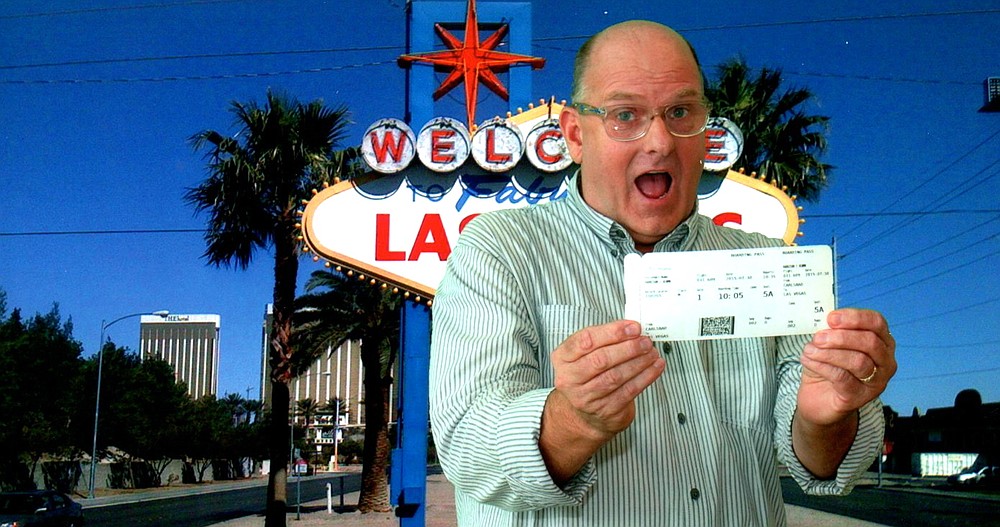 A happy author with his boarding pass, and green-screen generated Vegas sign

Biz Air’s director of operations, Ricardo Gomez, said they have yet to secure a major airline as a flight partner for connecting flights. “It takes time to establish those relationships,” he said. “But we can transfer baggage to any airline.” He said the airline plans to begin service to Sky Harbor Airport in Phoenix later this fall.

Owner Dan Cretsinger says he wants to add more passengers on his LAX flights; he’s looking to going into Oakland and San Jose, through LAX.

Biz Air Shuttle filled a void when United/Sky West Airlines pulled out of Carlsbad in April. Biz Air started two-daily flights to LAX on June 18. For now, Las Vegas will be served with flights on Thursdays, Fridays, and Sundays.

I'm all for this! I'd like to see Thursday evening departures, though. And I'm wondering about this $154 "promotional" fare... how much is the REAL fare gonna be? It's already more than SWA out of SAN. I'm absolutely willing to pay for the convenience of using CLD, but not endlessly... as it is, it's no biggie for me to drive to SAN, park in one of the garages, and take their shuttle to and from Terminal 1.