Developer applies to revise plans to also include two hotels! 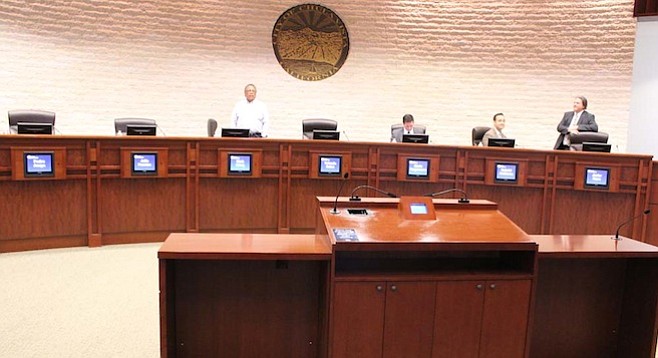 At the meeting, held in council chambers, city staffers explained that in 1993 Chula Vista created a general development plan for Otay Ranch. The plan designated 1.2 million square feet as commercial retail property that would serve the needs of the Eastlake community. By 2006, developers had constructed the Otay Ranch Town Center Mall on some of the land. 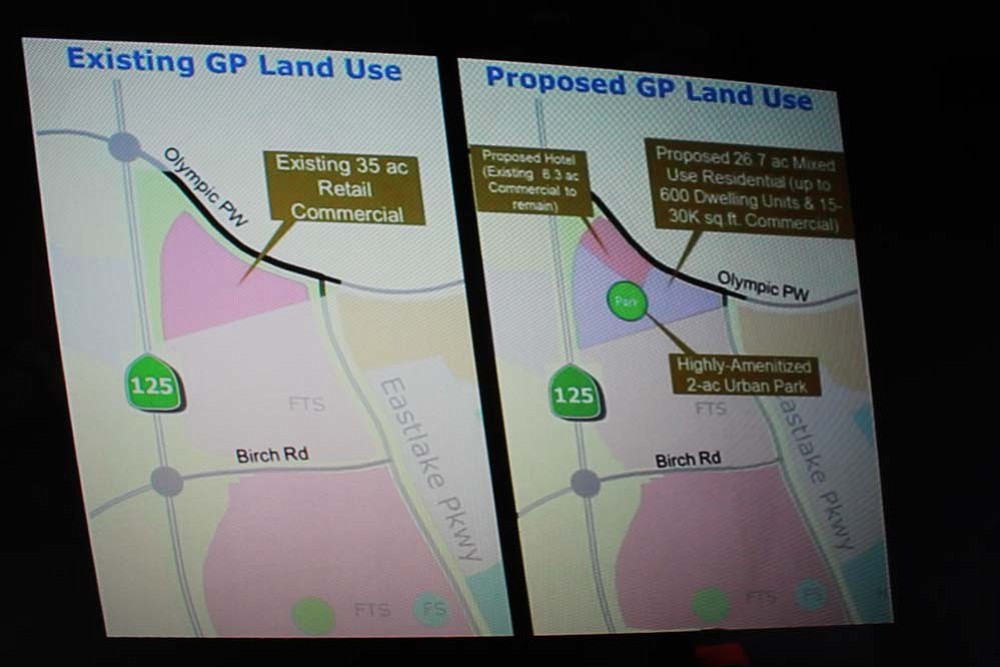 However, Baldwin & Sons wanted the plan amended, proposing that the 35 acres become mixed-use residential. The project would anticipate an increase of 180 students within the Wolf Canyon Elementary School area, 52 additional middle-school students and 121 more high-school students.

Nick Lee of Baldwin & Sons gave a presentation on the multi-use site, explaining, “We wanted to create a pedestrian-friendly neighborhood…. It’s in walking distance of grocery stores, the mall, the theater, the restaurant.” 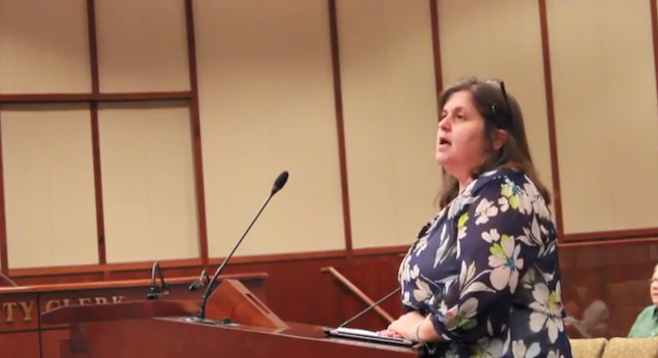 During the public comment portion of the meeting, however, Eastlake resident Jessica Hayes said that women won’t walk to Home Depot, buy a bag of fertilizer, and walk back. “We are going to drive. Pay attention, because it’s going to really impact traffic; and when you have 600 units, that’s 1200 to 1800 cars.”

Eastlake Greens resident Angela Reed said, “When I moved into Eastlake in ’98, Olympic View was our only elementary school available, and my daughter went there for kindergarten. Had she been allowed to stay for first grade, there would have been over 900 students, because the city didn’t plan [for] the number of families with children to attend the schools. I have a feeling that that’s going to be a similar situation.”

Colton Sudberry, an award-winning developer who helped create three town centers in Eastlake, spoke in favor of the project. He said Eastlake already has enough commercial retail space because “You can count on one hand how many quality retailers want to come to East Chula Vista right now.”

After the vote, Baldwin & Sons senior vice president Stephen Haase approached the podium and addressed the second item on the agenda: a public hearing for the four-story Residence Inn by Marriott Hotel with 148 guest rooms. He said, “Given the decision and the testimony tonight and the fact that the development agreement does intertwine the hotel with the development that we proposed, I request a continuance.”

The request was granted. The application will now go to city council for review.

Where is the water going to come from?

At the beginning of the meeting Planning Commissioner Mark Liuang recused himself and sat in the audience. He later made public comments as a private citizen. He was against the project.

Apparently, Planning Commissioner Yolanda Calvo wouldn't be able to vote because she had a conflict of interest, apparently because the developers happen to contract out with Calvo's place of employment.

Planning Commissioners serve as volunteers. There are seven commissioners in all, but only 4 voted.

Before Commissioner Liuang sat in the audience, he also stated, “Our current process is only to allow mailed out notifications to those who are within 500 feet of the intended parcel that may change.”

Also, Chula Vista City Councilmember Patricia Aguilar will hold a town meeting about this issue on Monday, May 4 from 6-8 p.m. at The Hub meeting space at the Otay Ranch branch library, which is in the food court at the Otay Town Center shopping mall.

In a city like San Diego, the "Residential" is 76% and "Industrial" is 13%. That is why 80,000 Chula Vistans have to leave Chula Vista every morning to jobs in San Diego and elsewhere. We are becoming a huge "bedroom community," with no job base, no industrial property-tax base, and we are second-lowest city in the County in terms of sales-tax revenue per population.

This was just another instance of a developer figuring they could make more money from more residential developments than any other way. And since our City Council is basically a "property rights" group, I have no doubt they will ignore the Planning Commission and vote "aye."

It seems like every city wants shopping and residential and no industrial. Circa 1960 when Rohr was being attacked by the CV City Council as not benefiting the residents Mr. Rohr paid all the employees in silver dollars. It shut the City Council up. It demonstrates that if a city has an industrial base it produces good paying white and blue collar jobs with the majority of the money staying in the community. CV should look to its history for lessons. Just who is going to stay in these hotels?

Nicely done Alex. Sadly, I don't believe many readers today are going to realize who that is, some may know the park, but hardly anyone in South Bay anymore could tell you that Mr. Rohr basically built South Bay from the ground up. Without him and his company, we would probably still have tomato fields from San Ysidro to Imperial Ave. When Rohr left, it was the beginning of the end for good working class jobs and families in the area.

I started a response yesterday and lost it to a network issue, VigilantinCV and AlexClark, are both on target. CV is rapidly becoming a bedroom community, as such we have all of the associated issues. Bad Transit, congested roads (East-West congested, North South Non-continuous), lack of community amenities (No Community Recreation Facilities south of Otay Lakes road), impacted schools (due to Open Boundaries), No commitment to the original zoning and planning. There are currently Two Major Developments in work near the proposed changes north of the Otay Ranch Mall, Milenia just south of the Mall and the development just south of Otay Ranch High School. The effects of both are starting to be felt on La Media, Birch, 125, Olympic Pkwy, and Eastlake Pkwy. It is obvious that none of our city council live or use the roads in this area. What's to happen when/if we get a university on Hunte Pkwy? Are we headed to suburban grid-lock? Just yesterday, Saturday about 11:00am there were 50 cars going west on Olympic Pkwy at La Media on one 3 minute signal cycle, that's 1000 vehicles an hour, ON A SATURDAY!!!! Wake up city council, what makes you think you are smarter than your predecessors? What has changed other than the greed of the Developers? Where is the overall assessment of the impact of these changes? Do not start fiddling with the plans, remember what happen to Nero and Rome. Stay the course, slow the development and improve the quality of life in East Chula Vista, before it is too late. BBQ

BBQ makes excellent points. Seems the planning commission and city council members are really oblivious to the issues the city faces. That's what you get when you keep electing the same old professional politicians.

We need new blood at city hall. Oh, and Salas is in way over her head as Mayor.

I have been a resident since 2002 and have seen this congestion build to being unbearable. It seems our planning commission and city govt are most likely going to approve but I am crossing my fingers they listen to all of the great info you all are bringing up. Due to the most idiotic toll rd 125, we are basically a peninsula town with only 2 roads heading east/west for all residents. If Baldwiin and Sons would pay off the toll rd they may get more commercial traffic to the mall and other commercial properties. I am definitely not paying a toll to go 1-2 exits to get to a shop north of me. I would rather go east/west and fight the traffic and all those horribly timed lights instead. Just a waste. I even have an ez pass and would hate to have to stop and pay at those least ergonomically designed booths. If I was from another area I wouldn't come to the mall either. Lets fix our transportation and commercial industry before we place more people and cars in this area.