We roast to sweetness

About as micro as a micro-roaster can be 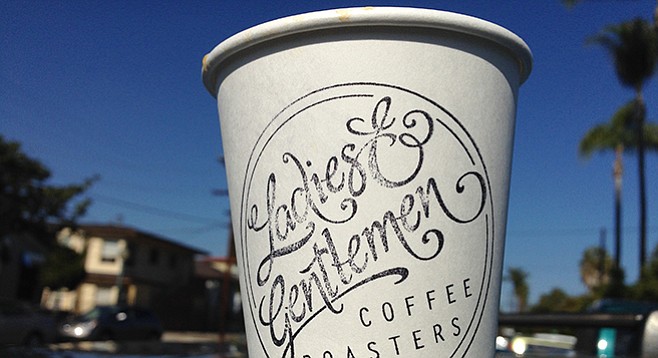 Sherman Heights has joined the list of specialty coffee neighborhoods — kind of a remarkable concept considering it’s one of those rare urban communities that lacks a Starbucks. In late March, Ladies & Gentlemen Coffee Roasters began early weekday business hours at the modest coffee counter they’ve been slowly building out over the past eight months near a freeway onramp at 19th and Market.

Ladies & Gentlemen may already be familiar to shoppers of the Golden Hill farmers’ market, where Joshua and Hannah Bonner have been selling beans and serving drinks since June, often meeting and greeting customers with their infant daughter in hand. The friendly husband-and-wife team has also steadily raised Ladies & Gentlemen’s profile within the local coffee community over the past year, engaging with other shop owners and roasters for special events, and winning the occasional latte art competition.

Whereas most roasters and baristas get involved in coffee while living in a city and only later travel abroad to experience a coffee in its country of origin, Josh Bonner did it the other way around. The son of missionaries, he moved to Peru at the age of six, and discovered specialty coffee while in high school at Lima third-wave shop Café Verde. He started a coffee program at the school where his father worked, and continued to work in coffee when he returned to the United States in 2010, including a stint at Orange County’s highly rated Portola Coffee Lab, and San Francisco Bay Area coffee outfits Stanza and Blue Bottle.

Hannah, a Chula Vista native, also spent time working at Blue Bottle, a well-known direct-trade roaster that reportedly raised more than $25 million in venture capital last year and has been aggressively acquiring smaller companies to expand its reach nationally. By comparison, Ladies & Gentlemen is about as micro as a micro-roaster can be, offering only two coffees at a time, made to order by the Bonners themselves, as pour over or flash brew iced coffee.

The decision to use flash brew has driven many of the coffee conversations the Bonners have with their customers in Golden Hill. “We never drank iced coffee while we were in San Francisco,” Joshua says, “We never liked cold brew because it tastes more oxidized.” They settled on flash brewing — brewing pour over coffee directly over ice — because it offers what he calls “more of an iced tea type of experience.” In other words, more refreshing compared to the richness of a 12- or 24-hour steep cold brew.

The Bonners’ roasting philosophy further distinguishes them from Blue Bottle, often credited with pioneering a movement towards light roasted beans. While noting that “each coffee shines at a different level,” the duo says, “We roast to sweetness and developed flavors. Its been a huge trend in coffee to roast super super light, but ironically some really light roasted coffees come out equally as bad as dark roasted coffees. We believe that medium roasts are generally speaking best.”