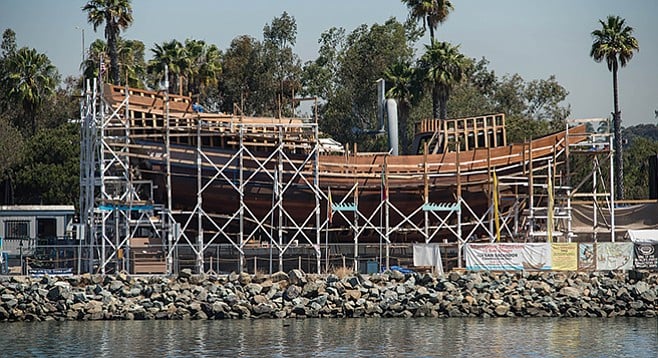 The planned floating of the full-scale replica of Juan Rodriguez Cabrillo’s 1542 ship, the San Salvador, was grounded prior to its highly anticipated April 19 launch date.

Engineers discovered the 151-ton ship weighed too much. “It was 20 tons more than expected,” said Robyn Gallant, the San Diego Maritime Museum’s spokesperson. It turned out to weigh more than the largest crane in San Diego could handle.

After months of coordinating expected ship movements in the harbor, naval operations, tides and weather conditions, and arranging to have street and light poles razed in its path, the timing and coordination of a launch will start all over.

Gallant said, “There is a crane in L.A. that we’ll have to bring down.” The museum did consider using a two-crane operation, but there was a possibility of damaging the ship with such weight being hoisted by two competing cranes. The museum is unsure at this point when, or where, they will try to launch the ship.

The extra weight is not surprising however. Much of the ship’s construction is from some of the hardest and most dense woods in the world. Some so heavy, if thrown into the water separately, would sink.

The project began over five years ago, and attracted some 500 volunteers and craftsmen. There were originally no detailed drawings of the San Salvador.

The replica’s design was first taken from petroglyphs found near Jacumba — possibly reflecting what the natives saw coming into the harbor.

Second, the boat’s builders looked at requirements of early sailing vessels that were found at insurer Lloyd’s of London. And third, from other sunken ships found along the West Coast.

Unfortunately, the public build site, with its historical displays and artifacts, was closed with the anticipation of an April 19 launch date. The ship can be seen towering over its fence line in the Spanish Landing area on Harbor Drive, across the street from the airport. 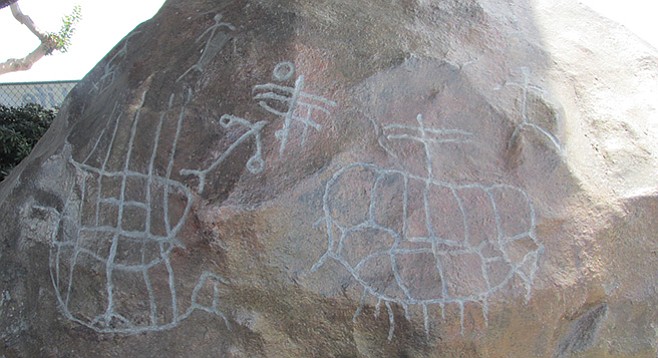 Footnote: In a June 3, 2009 story about the Jacumba petroglyphs, writer Robert Marcos may have been the first person to document the trail to the petroglyphs, and photograph the possible ancient renderings. Upon reading the story, maritime museum staff examined the petroglyphs prior to designing the San Salvador replica. Reportedly the rumblings of the April 2, 2010, 7.2 magnitude, Imperial Valley/Mexicali earthquake may have covered the boulder-strewn site.

We have Charger Girls for "navel" operations, but at the San Salvador berth, surely we're talking about naval operations. Also, are we "raising" street and light poles or razing them so the ship may pass on the street without mishaps before being launched?

I spoke with one of the "crew," and he said they don't know whether they will go ahead with the plan to haul the ship down Harbor Drive to Broadway Pier and launch it as originally planned, or possibly turn it and launch it right into the water 50 feet away. I can't believe they built this thing without anticipating all these problems. Who builds a ship first, and then figures out if they can actually get it to the water? Personally, I think the best best is to get that giant crane from LA (since nothing here in little ol' Sandy Eggo can handle it) and turn it toward the water, remove the bric-a-brac boulders and possibly dredge the bottom in that area for more depth, and then using ramps or rollers or whatever, launch it right from where it now sits. It amazes me to think we have shipyards right down the coast in National City that builds some of the largest Navy ships and aircraft carriers in the world and we don't have the ability to transport and launch a 16th century ship. Unreal.

Javajoe25 - Locations chosen primarily as showcase stages (as was/is the case for the maximally-publicized San Salvador) will never have the logistic capabilities of a major shipyard. But even at 151 tons: Where there's a will, there's a way.