The best happy hour for a beer hound like me 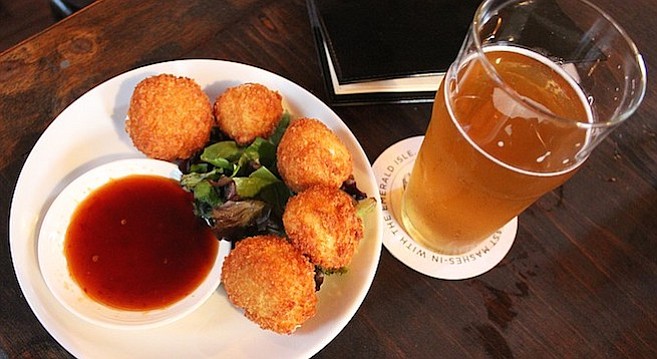 This wood-fired-oven-driven, casual-yet-upscale bar and resto has one of North County’s most conscientiously cultivated beverage assortments. From a beer list that features specialties, one-offs, and Bellows Forge, a smoked oatmeal stout developed especially for the restaurant by award-winning local brewery, AleSmith, to a wine list stocked with boutique offerings and lesser-seen varietals to a bourbon list that’s a (devil’s) cut above, there’s something for everyone (including $6 whiskey sours and mules from 3–6 p.m. Tuesday through Friday). Extra happiness comes in the form of $10 happy-hour flatbreads topped with prosciutto, gorgonzola, plum and saba; king trumpets, shiitakes, and Taleggio; and more.

The Gaslamp’s all about nightlife, but a good reason to venture downtown while the sun’s still out is this mostly-Italian cool kid spot’s Social Hour, which takes place from 3 to 6 p.m., Monday through Friday. Belly up to the three-sided bar or grab one of the mismatched, ultra-mod seats on the wrap-around outdoor patio, and enjoy $3 off cocktails, mostly local draft beer, wines by the glass and, best of all, the avant garde edible creations of young and talented executive chef Chris Gentile. He’s only 24, but coming up at fine dining gems, Nine-Ten and Kitchen 1540, have given him the chops to provide tasty dishes with white linen panache… sometimes at happy-hour prices.

The ale assortment is off to a nice start and far exceeds what was available before the Cohn Restaurant Group converted its grill-it-yourself Strip Club to a beer-driven venue. A daily happy hour (2 to 6 p.m.) allows guests to sample their way through more than 25 draft offerings at just $4 per pour (select wines and well cocktails go for the same price during that span). Roasted butternut squash flatbreads, crispy maple bourbon bacon sticks and tuna tataki can also be had for $5. My colleage Mary Beth Abate loves the savory Parmesan herb shoestring fries. But it’s free game play (ping pong, pool, foosball, shuffleboard) that really brings the happy.

I’ve already found a nice place to frequent during Padres season at this East Village decidedly SoCal Irish-ish brewpub. The fact I can pre-game at a discount from 4 to 6 p.m., Monday through Friday, makes the homey, two-story suds spot even more appealing. House beers, including brewmaster Dan Drayne’s highly quaffable Irish-style red ales and nitro stouts, are $5 (far cheaper than any of the brews at the ballpark) and specialty cocktails come in at $6. Add on delish fried goat cheese, truffle fries or mac ’n’ cheese at $5 a pop and this happy hour’s a home run.

Of all the happy hours in town, this is probably the best for a beer hound like me. All of the more than two-dozen beers on tap are half-off during happy hour (3–6 p.m., daily). And we’re not talking macro-lager garbage. There’s a reason this place has a line out the door come 3 p.m. Owner Steve Yeng is a beer nerd’s hero, going to great lengths to get specialty suds offerings ranging from sours and Belgian Trappist ales to triple IPAs and imperial stouts. Sweetening the daily deal, he throws in select brews available for just $2 per pint, leaving plenty of dough for a bowl of pho or sizzling fish, both of which rock.

I like almost everything about the URBN empire’s brewpub. The beers hit my palate right, the wings are tame but tasty, and even the Connecticut-style coal-fired pies have grown on me. The only thing I’m not fond of is its far-flung location. If I didn’t have to drive so far, I’d spend lots more time perched on a barstool and chatting up brewmaster Callaway Ryan over pints of his elegant saison, especially at a buck-off pints (and two off sampler flights) from 3 to 6 p.m., Monday through Friday, and 10 p.m. to midnight, Friday through Saturday.

This revamped strip mall ’cue joint remains one of the county’s hidden gems. Thanks to co-owner Tom Nickel (O’Brien’s Pub, Nickel Beer Co.) and his connections at Alpine Beer Co., Green Flash Brewing Co., Societe Brewing Co. and more, the taps pour forth with fine IPAs and plenty more, all of which pair well with delectable stick-to-your-ribs (and fingers) barbecue. West Coast takes a dollar off all pints from 11:30 a.m. to 3 p.m. Tuesday, Thursday and Friday and all day on Wednesdays. Sundays, pitchers of beer are $12 and come Monday, it’s TDIM thanks to $10 pitcher fills.