What it's like to sing the national anthem at a stadium

100 feet away from a wave of humanity 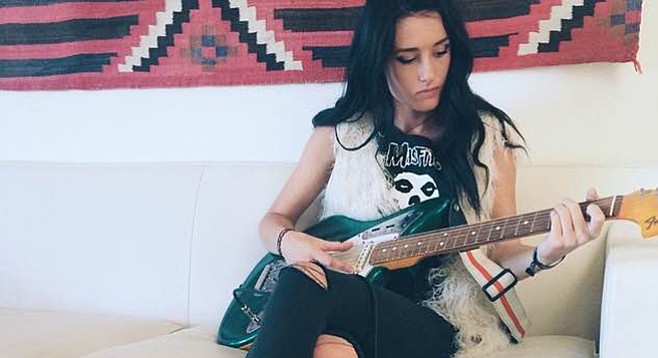 Singer/songwriter Caroline Corn, who sang the national anthem at last Thursday’s Padres home opener, can be forgiven if she doesn’t recall the Padres’ most famous anthem rendition. She was only four when Roseanne Barr sang a cacophonous version then-president George H.W. Bush called “disgraceful.” Barr claimed her loud shrieks resulted from being unable to hear herself.

Corn, 19, a frequent performer at Lestat’s Coffee House, admits that stadium acoustics do present challenges. “There is a one-second delay,” Corn tells the Reader after she did a sound check at Petco Park. “We went out right after to buy in-ear monitors.”

Corn says she got no teleprompters. “I never sang without my guitar. I had to try to keep my hands busy.” But she says singing in a stadium does have its upside.

“Sometimes [at Lestat’s] I’ll be singing my heart out to one of my sad, sappy songs, and I look down and see someone texting...it can be a total distraction if your audience is ten feet away and you can hear them breathing. It’s different if you’re at Petco and 100 feet away from a wave of humanity.”

Corn, who attended La Jolla High, says she hasn’t been to a Padres game in years but was asked to send in a video of her singing the “Star-Spangled Banner.” “We recorded it on my iPhone in my living room. They got back and said yes. I had a week to get ready.”

Corn says she has been performing in public for a year, mostly at Lestat’s. Aaron Bowen, who has been playing in the local acoustic scene for a decade, says Corn is part of a new contingent of acoustic artists in a scene long identified by the likes of Gregory Page, Lisa Sanders, Carlos Olmeda, and Jewel.

“Two years ago [the scene] was really dead,” says Bowen. “Now there is a new community that is frighteningly good and who are there for each other.”

Corn says her inspiration comes from “polar opposites. I grew up with the Misfits, the Ramones, and Blink-182, and I was also into Ryan Adams, Neil Young, and Elliot Smith... I work at Tom DeLonge’s [Macbeth’s Footwear in Encinitas], and I love the Switchfoot guys. So I think I get something from the Encinitas crowd and the mellow, arty vibe of Lestat’s.”