Kimm Rogers comes out of retirement. 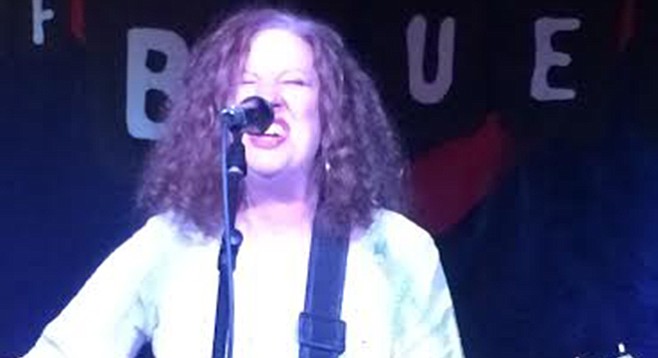 “It’s hard for me to judge the San Diego thing because I’m just breaking in.” Kimm Rogers is learning that her current hometown is not the easiest place to restart one’s career. At the age of 57, Rogers is back with her first new music in years and a publicist she is paying for out of her savings. Recently, she soft-released her CD, recorded in Los Angeles with Julian (son of Larry) Coryell and a host of studio-musician friends from the old days, back when Rogers was on the now-defunct Island Records label. She first broke out in the 1980s with “Train to Nowhere,” a single that was good enough to land her the record deal. “But here, a lot of people don’t know me.”

The Cleveland-born, Los Angeles–raised singer/songwriter lives in Ocean Beach with her husband. It’s been an uphill battle for Rogers just to get paid stage time here. “I’m reaching out to anybody.” To date, she’s gigged at Across the Street, near Mueller College on Park Boulevard. The turnout, she says, was thin. “My neighbors said they would have been there, but basketball playoffs were on,” she laughs. “In my case, I started in the music business in L.A., and I’ve been gone for quite some time.” She says it was Facebook that put her back in touch with industry friends who convinced her to come out of retirement.

“It’s hard, because I’m not in my 20s. I can’t go out to clubs and socialize like I used to. At that age, you go out every night. I’m not in a situation where I can get out and beat down the doors all the time.” Rogers has a generous, easy laugh. “I can’t even believe I hear myself at a gig these days saying, ‘That’s too loud!’”

Singer/songwriter Cathryn Beeks plugged Rogers into an open slot at one of her local showcases at House of Blues, and Rogers says it went well. “I’m older, and I’m not so much to look at anymore,” she says, implying that her songs, and not her looks, have to do all the heavy lifting. “And if you don’t hear my words, you’re not gonna get what my music is about.” She says by the response, the HOB audience got it. “At this point in my career, I don’t want to be playing in a bar, competing with a bunch of loud noise.”