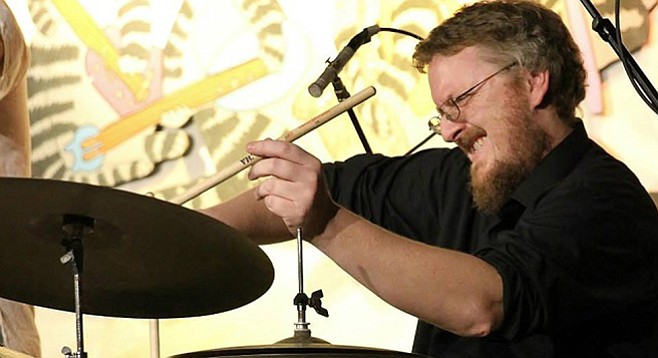 “I was in shock,” composer/percussionist Nathan Hubbard confesses to the Reader over the phone, regarding his surprise win for Best Jazz CD at last year’s SDMA ceremony. “I ran up there to accept it but didn’t have anything prepared because I was positive I wasn’t going to win.”

Has life changed, post-ceremony? “It’s hard to say, although it’s definitely made me step up my game a little bit. I’ve been reaching out for things and gigs that I wouldn’t normally have gone for, and I think there’s been a little bit of name recognition now — though, I’ve been ribbed by my friends about it. I think it’ll take a few years to fully understand what it means.”

In the meantime, Hubbard is busy writing charts with a concept show in mind. “I have a one-off gig that will hopefully evolve into something more for my birthday on May 23 at Dizzy’s,” says Hubbard, “with a group playing all-new music based on a poem by the Spanish poet Lorca that will feature the tap-dancer Claudia Gomez, plus violin, guitar, bass, and cello. I don’t know how you would explain that band — it’s sort of a Latin/chamber/gypsy/flamenco–type thing.”

Working steady as a musician sometimes involves taking unusual gigs. “Musicals are like my ‘day job.’ I mean, I appreciate the work — that’s one of the ways I make money.... So far this year I’ve done West Side Story and two weeks of Hello, Dolly!”

Do the jazz chops help or hinder his musical-theater work?

“If I’m supposed to play something that sounds like 1930s swing, I have an understanding of what that means — but I can play really stripped down and in context, too. Some people have this idea that if they’re not wiggling their fingers a lot, they aren’t expressing themselves, but I try to really serve the music in front of me.

“It’s always a tricky thing to find that balance,” says Hubbard. “You want people to hire you and play in other people’s bands, and at the same time you want to present your own music — it’s a challenge I enjoy.”