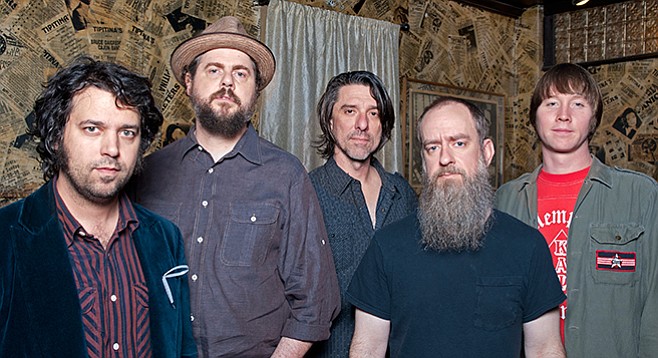 In 2008, the Athens, Georgia–based alt-country act Drive-By Truckers took a different musical trip. They toured with acoustic guitars, sat down for the performances, and road-tested material that would end up on 2008’s Brighter Than Creation’s Dark.

This year they’ll revisit that strategy.

“I have two [songs] that I expect to be doing, and maybe I’ll come up with something else,” longtime Trucker Mike Cooley told the Reader via phone. “Right now, off the top of my head, there are about a half a dozen that are new, and more than that will be new to the audience. There’s some that we have recorded but that we never put out. We always focus on stuff we don’t play live very often, too. Some deeper cuts and stuff you don’t always hear in the electric shows. We can sit down and have a good time with it.”

Cooley is hoping to document a couple of the shows for a live release. So if you are at the Belly Up on April 22, there is a chance that your “WOOO!” might end up on Drive-By Truckers’ next record.

The Truckers have been together since 1996. Their tenth album, English Oceans, was released last year and continued their tradition of Southern-tinged rock. The band has burned through plenty of musicians during their long haul, but the two major songwriters, Cooley and his bandmate Patterson Hood, have both stayed onboard — a remarkable run for a band with two creative forces.

“We get along better, actually, than we ever did,” Cooley explained. “It kind of gets better with maturity...we respect each other’s stuff. We enjoy the fact that the other guy’s doing some writing, rather than feel threatened by it. I think that might be a key. Neither one of us wants to sing every song. We both enjoy backing away from the mic and just playing for a little while.”

San Diego fans can be thankful that the road-tested outfit is still down with playing America’s Finest City, but it’s probably the case that every show comes equipped with a knucklehead.

“Somebody swiped one of our stage props at the House of Blues one time, but the House of Blues came through. They paid for it,” Cooley said. “They’re good folks. It was a big poster. It was quite expensive to have printed. It was so funny, they had been really tight with security all day long, and we had to show a credential or something to go from one part of the room to another, but after the show some nimrod just goes in and walks out with some of our shit. I think we had just kicked him out of the dressing room, too. He had found his way back there somehow. It was one of those things, ‘You know that guy?’ ‘No, do you?’ ‘Who’s he friends with?’ ‘Nobody.’ ‘Well, get rid of his ass.’ There are always those people who have this talent for being able to weasel their way in that normal people just can’t do, ya know?”