Cartman, where are you? 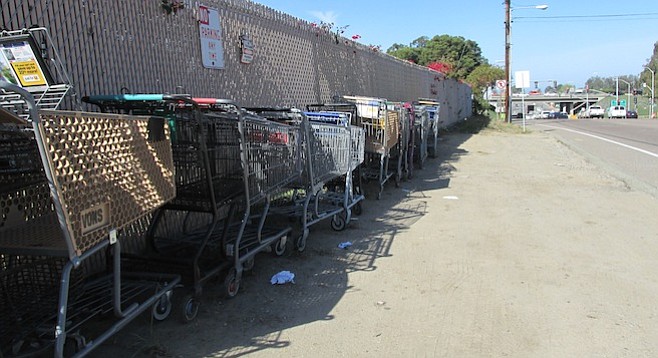 Residents along Encinitas’ Santa Fe Drive may be wondering what’s going on with all the shopping carts. The 19 carts have been sitting for weeks in front of a San Dieguito Water District’s maintenance yard at 601 Santa Fe Drive.

Whole Foods, 1.4 miles away on Coast Highway 101, had the most escaped carts — six. “That’s a lot of walking and pushing a shopping cart up the hill,” said a local resident. Vons, just on the other side of I-5, followed with five carts; Smart & Final on Encinitas Boulevard racked up three; Rite Aid, next to Vons, two. From two miles away, shoppers pushed one cart each from Ralphs, Sprouts, and the 99 Cent Store.

Reached last week, water district manager Bill O'Donnell said his crews didn’t collect them, but they did push a few carts left in his yard’s driveway out into the street forming one line. O’Donnell said that their maintenance yard is shared with the city’s parks department and street maintenance division, and knew that the parks department was working on the issue.

On April 11, street-maintenance director John Ugrob said, "The carts were collected by a contractor for the city parks, beaches, and trails. They are waiting pick up from a free nonprofit service that returns them back to their owners.”

Shopping carts are valued at around $150 each, according to an online dealer. If the 19 abandoned carts don't make it back to their stores, that will amount to a loss of about $3000.

In most cities it is the responsibility of the stores to maintain control of their carts. They must have a cart recovery plan approved by the city. I think that Encinitas has the strictest ordinance with hefty fines for 'escaped carts'. Cities who have strict and enforced ordinances have the least escaped carts. Only when it costs the company will they control their carts. As long as some idiot wants to return them for free then expect more carts.