Get me into the ballgame 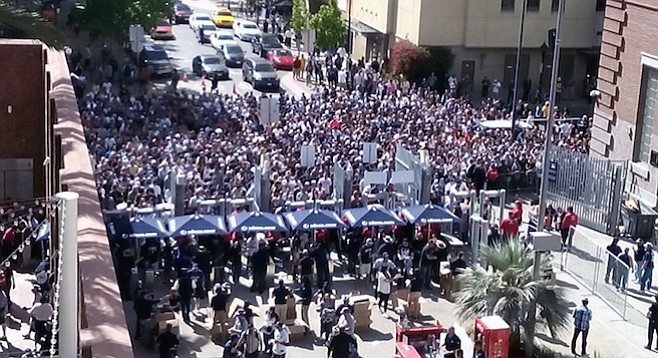 Walk-through metal detectors, electromagnetic hand wands, and other new airport-style security measures led to confusion and a slower-than-usual entry for thousands of fans at the Padres’ annual home opener April 9.

New security and screening procedures at Petco and the other 29 ballparks went into effect this season due to mandates from Major League Baseball, according to a page entitled “Security Changes for 2015” on the team’s website.

Fans don’t have to take off their shoes but must now remove cell phones, cameras, and metal glass cases and place them in a bowl prior to passing through a metal detector. Security staff with hand wands wait inside in case further screening is necessary.

Gates opened at 12:30 — more than three hours before the first pitch — to speed up entry. Fans had already formed lines, and the team “mission bell” rang five times when fans were permitted to enter.

A loudspeaker mentioned the new rules, and one fan in line winced when the announcement, “Petco Park is a weapons-free zone,” was made.

An usher laughed when asked if this meant weapons were permitted in previous years. “I guess you have to come out and make it clear these days,” he said.

The Padres say the detectors are calibrated to identify dangerous items but allow fans with small, harmless items like coins, watches, and belt buckles to pass unfettered. But one of the first fans to enter set off the alarm, and an employee asked to scan the fan’s midsection; a belt buckle was determined to be the cause.

For years, ballpark security has checked bags with the aid of a drum stick but some fans reported the search seemed more thorough this year.

“It seemed like forever and I was the fourth or fifth person back when they opened the gate,” said a woman who said she has attended all 12 home openers at Petco.

“It took a lot longer with the visual search and the drum stick. They asked me to unzip each of the smaller zipper bags in my purse: my make-up case, iPod pouch, and even [a zipped-up pocket] in my purse,” she said.

The woman said the entry became clogged because of security’s decision to check bags after telling fans to pass through the metal detector. “I put my bag on the table, walked through metal detector, and then the bag was searched,” she said. “I think that might be where the big stall was originating from.”

Several fans also seemed confused over what items may be brought into the ballpark. Extended discussions were witnessed between security staff and fans at inspection stations. (For an updated list of banned items see this Padres web page.)

The Padres say they tried to prevent the logjams with increased staffing. The website read: “The Padres are making every effort to ensure this security enhancement doesn't slow down the process of getting into the game. Initially, as with any new process, fans may experience longer wait times. We will have extra staff on duty at peak entry times to help facilitate the quickest entry possible. We appreciate your patience.”

As the first pitch awaited, a huge swarm of fans were still waiting to pass through the K Street entrance (as the photo shows). These fans missed the national anthem, player introductions, an aerial demonstration by the United States Navy parachute team, and the unfurling of the Holiday Bowl Big Flag, held by 300 sailors. Lines could be seen as late as the third inning.

The Padres, I thought, did a pretty good job warning fans in advance. They had staff with bullhorns telling people that other gates than the one I had chosen (by the Tilted Kilt) had shorter lines. I went to a different gate and got in in under 15 minutes.