How did this support life?

Thousands of years of human habitation on display at Indian Hill 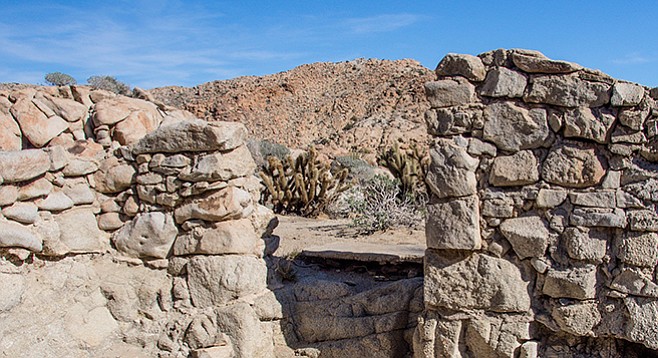 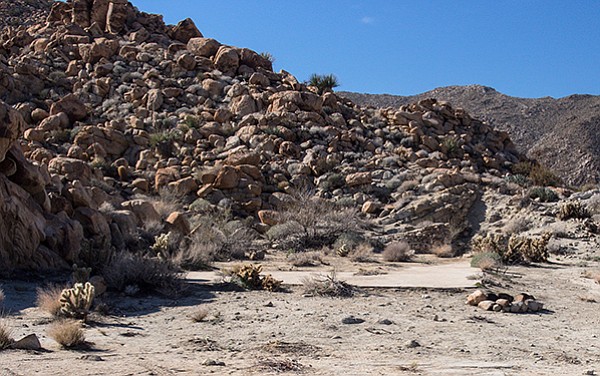 Visiting Indian Hill gives us a renewed appreciation for this desert area. Humans have used the area for perhaps several thousand years. The last Indian cultural group to occupy this area was the Kumeyaay. It was later used by local cattlemen and, much later, beginning in 1912, by construction crews of the San Diego and Arizona Eastern Railway — the “Impossible Railroad” — who dug tunnels, laid track, and built a large wooden trestle through Carrizo Gorge to connect with San Diego. Their construction camp was located near what is marked as Indian Hill on the USGS topographic map. The “real” Indian Hill, however, is another rocky hill to the southeast with a large shelter and morteros on its north side. 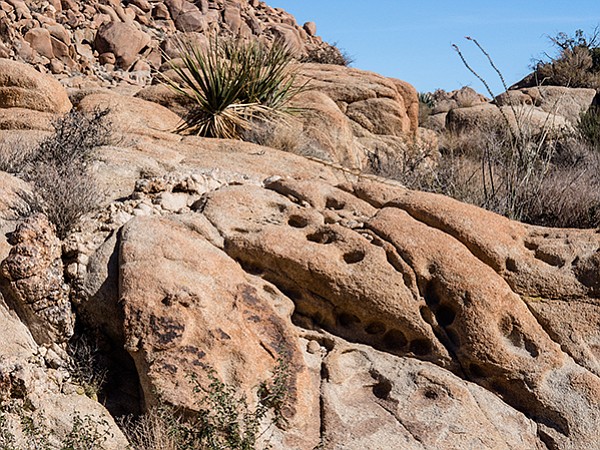 In looking at the area now, it is hard to see how it could have supported human life, let alone cattle. However, it is likely that the climate was more favorable in the past than it is currently. Also, the Indian groups living here had the ingenuity and culture necessary to make a living in this harsh climate, using the available resources at hand.

When beginning the hike, avoid the illegal jeep road that crosses the railroad track and continues up the wash and an intermittent stream, ending within 100 yards of Indian Hill. This road is a laborious trudge through soft sand churned up by the many vehicles that have used this route, scarring the fragile desert. There is a better way to get there. From your parked vehicle, go under the railroad tracks at the crossing and proceed west, across a broad sandy plain with abundant cholla. Stay on the south side of the roughly 400-foot high hill, about 0.5 mile from the crossing, whose slopes are covered with a magnificent cactus garden, including barrel cactus as tall as an average human. At this point, look west/southwest for a pile of large boulders about 0.4 mile straight ahead. That is the real Indian Hill. 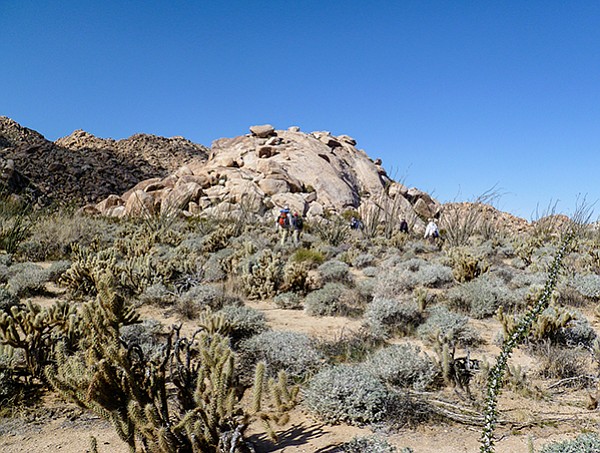 Indian Hill is a pile of highly eroded granite boulders, weathered in a way that has created numerous caves, narrow passages, and rocky overhangs. One large cave in particular on the north side had been inhabited by Indian groups for thousands of years. The roof of this cave still retains soot from past cooking fires. The area is culturally important and protected. Mortero holes are found next to the large cave and scattered around the hill area, attesting to the heavy Indian use of this area. Morteros are cavities worn into boulders when seeds and plants were ground with stones or pieces of wood. You may find pottery shards scattered about — do not move these as the exact location of artifacts are important to archaeologists who record cultural sites. The area also has both pictographs and petroglyphs, which presumably had ritualistic or religious significance to the Indians who lived here. Although their exact meaning is not known, it’s important to treat the site with respect. Look and photograph if desired, but do not touch. Care must be taken to avoid touching pictographs as any contact can damage or destroy them.

About 100 years ago, over 400 workers building the segment of the railroad through Carrizo Canyon lived and worked at this site, then known as China Camp. Little remains of the camp at the present time other than an old stone wall, a cement slab, and some rusting artifacts. The name suggests that Chinese labor helped to build this railroad, but it is a mistake to think so: there is no evidence to prove this. While exploring the area, think about the heroic effort that was required to build a railroad through the Jacumba Mountains.

An optional extension to this trip is to hike down to Carrizo Palms, following an old road to the west that overlooks the railroad tracks. However, the route is rugged and steep. The railroad workers pumped water from Carrizo Palms to the railroad camp.

Return the same way or follow the dirt road between the camp and the railroad tracks back to your vehicle. Although motorized vehicles are not allowed to use this road either, you will find abundant evidence of frequent illegal vehicle use. The soft sand created by this activity makes for unpleasant walking.

Distance from downtown San Diego: 96.5 miles. Allow 2 hours (Anza-Borrego Desert State Park). From CA-163N, take I-8E, exiting on the Imperial Hwy at Ocotillo after 88 miles. Turn north on SR-2 (Imperial Hwy), and drive 8.5 miles to Mortero Wash road, on the left just past the Border Patrol station. Take this dirt road west 3 miles to its intersection with Dos Cabezas Rd. The intersection of Dos Cabezas and Mortero Wash roads is not signed, and there other competing roads. The topo map is not a reliable guide here, as the road that needs to be taken is not on the map. It is roughly 0.1 mile east of the railroad tracks. It looks down on the tracks and the rusty water tower beside them. Go right on this road and proceed north/northwest for approximately 1.2 miles. Look for a low railroad undercrossing and park there on the east side of the tracks. High clearance vehicle or 4WD recommended.

Hiking length: About a 5-mile loop with an out-and-back segment.

Difficulty: Moderate. Mostly easy walking on relatively flat terrain, although some rock climbing is necessary to fully explore Indian Hill. A compass or GPS is useful for some route finding as there is no trail to the railroad camp. No facilities or water. No dogs or mountain bikes allowed.

Did this hike a few times. Saw the pictographs but not the petroglyphs. Still well worth the effort. Area is saturated with pot shards and pieces of flint. I also took a walk along the railroad tracks, heading toward a tunnel (totally illegal, but hey, you have to go outlaw once in a while). We went around a bend and much to the surprise of myself and my lady friend, we spooked a herd of mountain sheep. She had never seen them before so it was a real thrill for her. A really interesting area and a great hike.