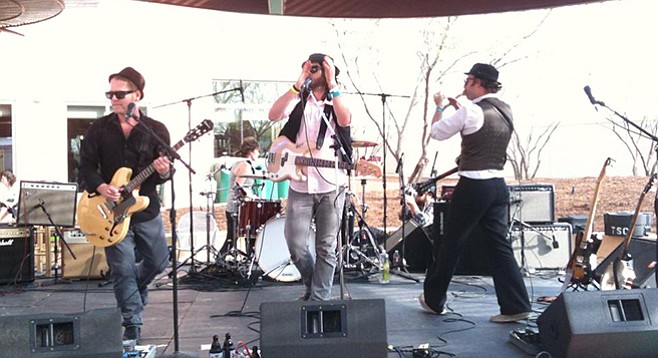 “I was hoping by now to be able to describe more of the details,” Joshua Zimmerman tells the Reader, “but I have to keep it a little vague.” His band, the Silent Comedy, recently recorded a track in a Los Angeles studio that may or may not be used for television ­— with Kris Kristofferson on vocals. The outlaw-country singer/songwriter now lives on Maui, which is where Zimmerman and he connected. “I got to sit in while Kristofferson recorded his tracks,” Zimmerman explains. “He’s getting close to 80, I think. It was amazing to hear stories about his life.” For example? “I didn’t know he was a Rhodes Scholar. And, he’s in better shape than I am. He’s pretty ripped.”

Suddenly, the phone connection breaks off. Zimmerman, it turns out, is calling from Austin, Texas, where he’s at South by Southwest, the annual music-industry showcase. “That was one of my friends from the Mowglis.” Zimmerman apologizes when he comes back on the line. “It’s so nice to be here and not have any responsibilities.” Last year, he says the Silent Comedy performed something like a dozen gigs during the event. SXSW is a stopover for Zimmerman, who is heading back to San Diego from his new home in Long Island City.

“I moved to New York in October of last year. Winter? It’s been pretty rough. I had to dig the car out from under the snow a few times.” The main difference in the music scene there and the music scene in San Diego, he says, is that “every band I like comes through New York. But from what I hear, it’s tougher to make it in New York because of the high cost of living. It drives a lot of musicians out.”

While reunited in San Diego, the Silent Comedy will perform a couple of Record Store Day shows on April 18. “We’re re-releasing Common Faults,” he says. (Silent Comedy has a new album in the can, but at present the band is label-shopping it.) “April is the fifth anniversary of Common Faults. We’re going to perform the entire record from front to back for our San Diego fans. And people have really wanted that record on vinyl,” which he says has been remixed and remastered and will be available at the venues. “We’ll do an acoustic set at M-Theory Music in Hillcrest that afternoon, then an all-ages show at the Irenic in the evening with the full band.”

What does he miss most about living in San Diego? Mexican food. “When I get back, I’m going downtown to Pokez,” he says. “Immediately. Right across the street from where I live in New York, there’s this place that advertises real California Mexican food. It’s not.”