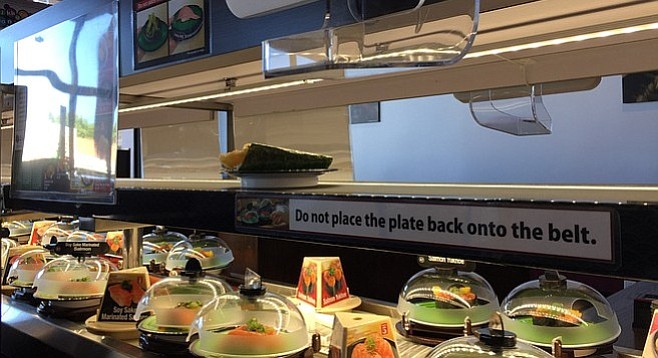 The first thing you’ll need to do after finding a seat at KULA Revolving Sushi Bar is to listen carefully to the instructions you’ll be given. For example, “Do not touch Mr. Fresh.” This anthropomorphized sushi-delivery system is designed to keep the food fresh and the germs out. 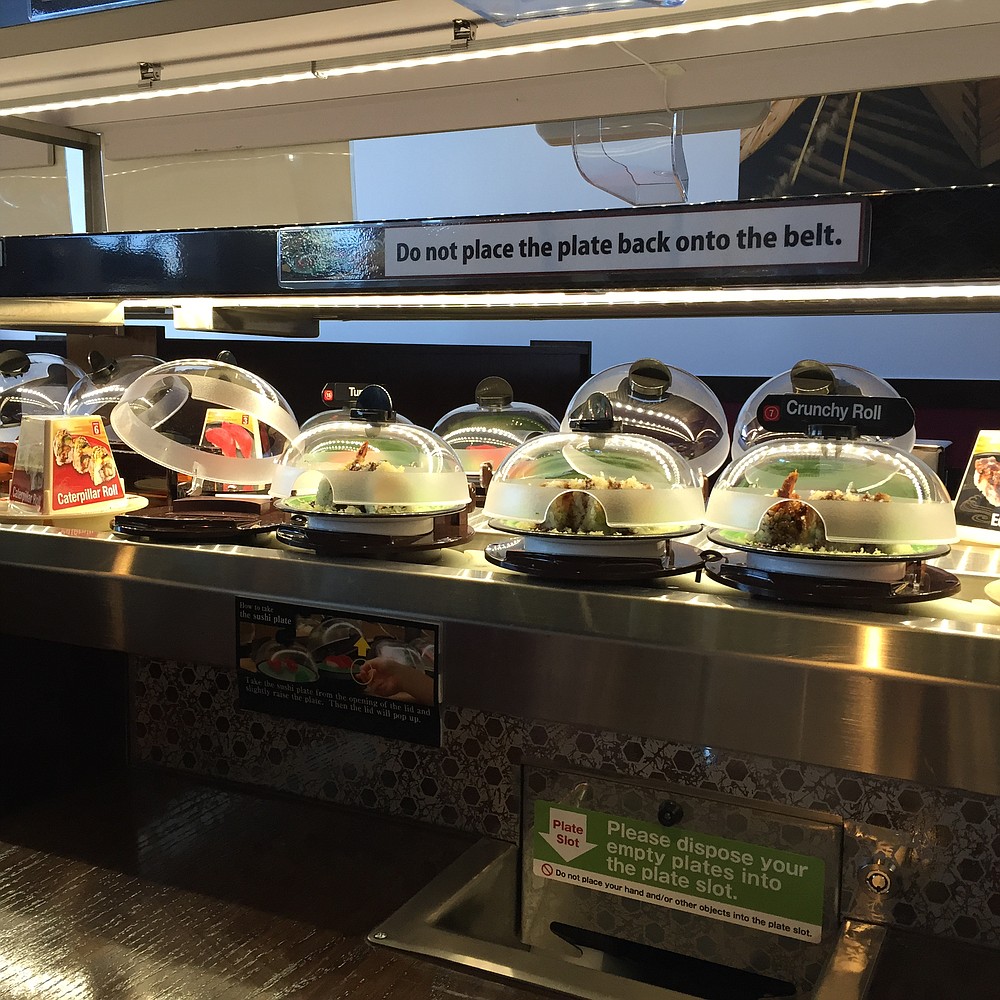 When you see something you want making its rounds on this infinite sushi loop, you are to carefully grab just the edge of the plate — once you lift the plate from Mr. Fresh, the plastic top will flip up, the plate will come out, you get your food, and he goes back to the kitchen to be restocked. Each Mr. Fresh has a chip (an RFID, or radio-frequency identification) that notifies the kitchen when food has been removed (so they know which items need to be replaced) and also lets them know how long an item has been circulating. The maximum amount of time any one dish will remain on the belt is three hours, though I was ensured “it is almost never that long.” 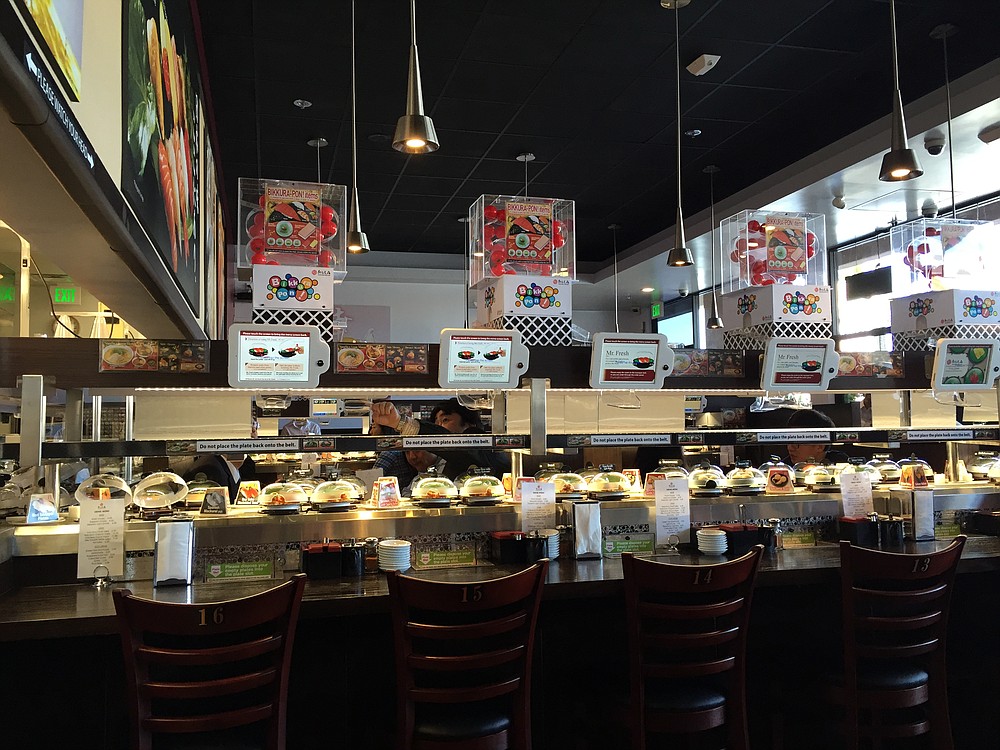 Every plate from the conveyor belt is $2.25 unless otherwise noted. When you are finished eating an item, you drop its plate into a slot (only the green plates from the conveyor belt, absolutely no refuse, and — as a the warning above the slot states — most certainly not your hands). This is when the “game-like activity” known as Bikkura-Pon begins. Bikkura translates as “a surprise” and is also a pun as it contains the word “restart,” which is Kura in Japan. The “Pon” suffix basically means “bulk dispenser.” In other words, it’s a bulk prize dispenser. 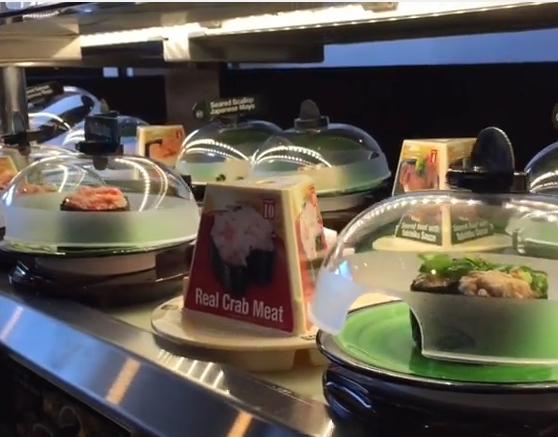 After the fifth plate goes down the slot (and again at ten), a cartoon begins playing on the screen at your table (or in front of you if you’re seated at the bar). An evil ninja appears, and you are encouraged to defeat him by entering more plates. When you get to 15 plates (this became our goal, of course), the gumball machine above the screen is activated and a plastic apple is released. Contained within the apple is a miniscule Mr. Fresh, complete with sushi inside.

You can see the entire process in this video of our lunch.

You need not wait for the food to come around — when it’s not urging you to defeat ninjas, that screen serves as an ordering device. Here you can order any sushi that might appear on the belt or other hot items that must come fresh from the kitchen such as hand rolls or crispy chicken. I recommend the crispy chicken — there’s a hint of ginger and a kick of spice. 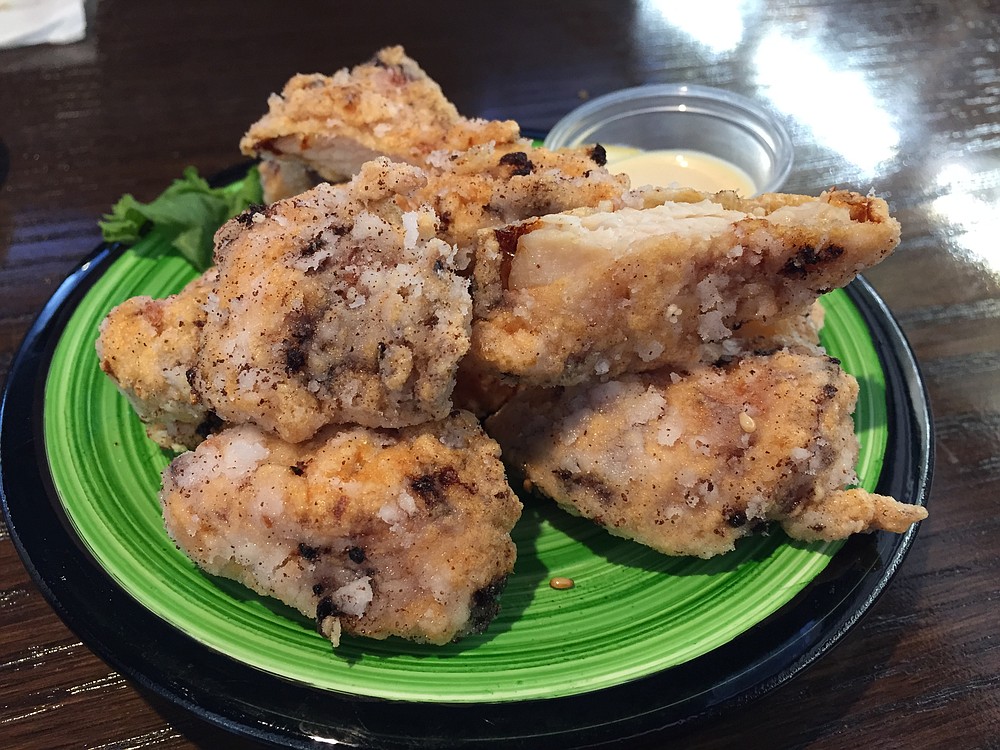 Crispy Chicken from the kitchen at KULA

The items ordered directly arrive on the belt above the sushi-go-round, and once they are ready they are sent zooming out from the kitchen. A little bell signifies it’s on its way, and it’s zipped down to you at warp-speed, stopping precisely beside your table.

At all times, a friendly server is checking in to see that everything is going smoothly and to make sure your beverage is topped off. From the machinery to the games, everything at KULA is down to a science.

A bit about the company — Kura Corporation (as it’s known in Japan) began as a simple sushi restaurant in 1977. Now they have around 350 locations, most of which are in Japan. There are a handful in Irvine and Los Angeles, but this one on Convoy is the first to open in San Diego (open to the public on April 10).

Kura cites its philosophy as, “safe, tasty, and inexpensive.” The company’s Japanese website is bold. When referencing the value of their product, Kura declares, “We, Kura Corporation, are not a pioneer in the revolving sushi industry…there were almost no good lessons we learn from pioneers, therefore we have created our original unique products and developed advanced systems of store operation.” 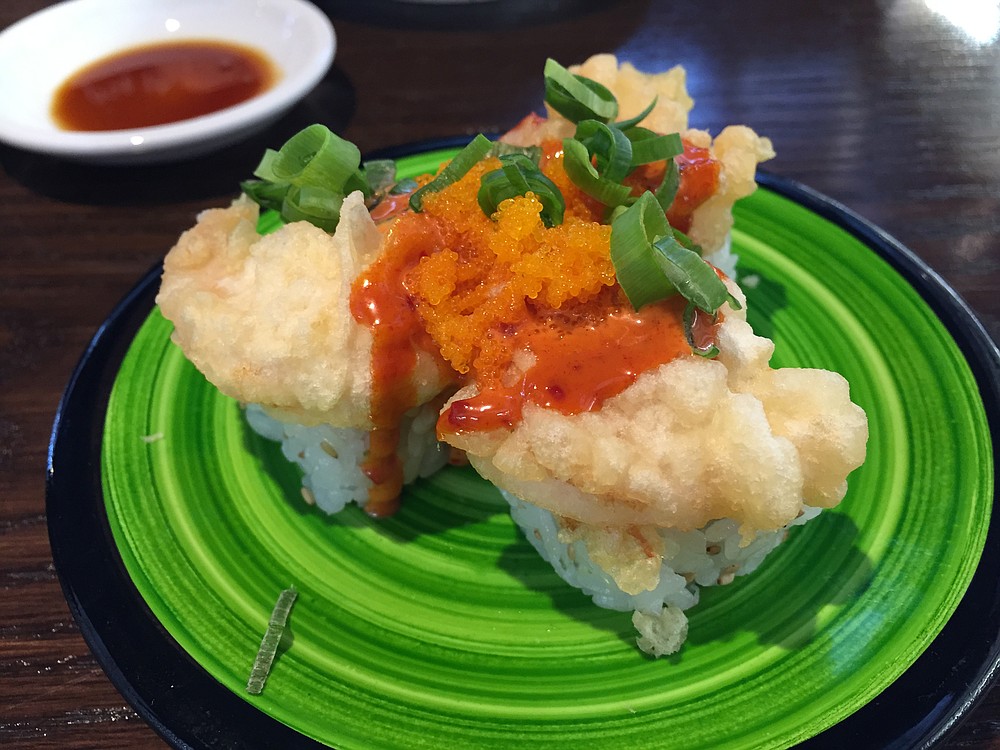 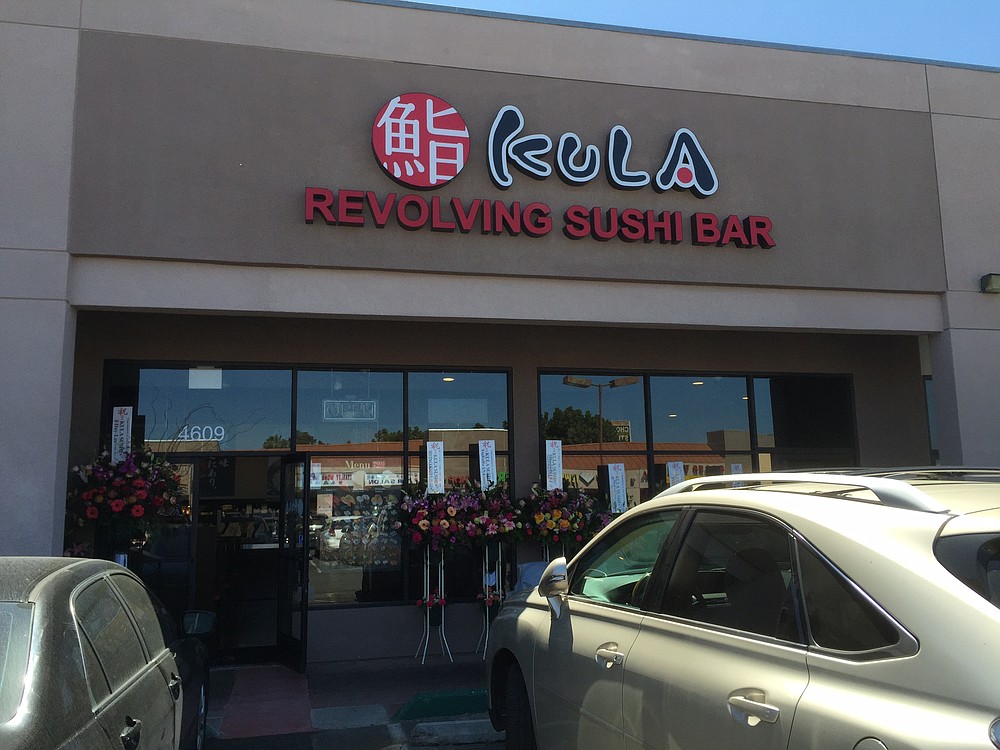 KULA Revolving Sushi Bar, in good company at a strip mall on Convoy 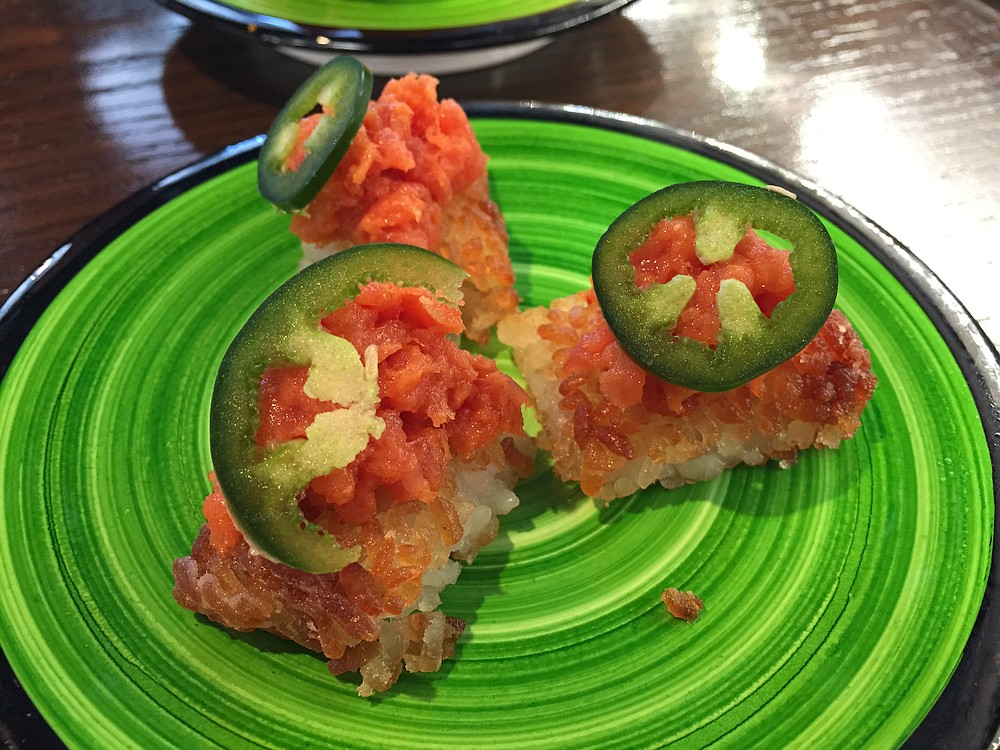 In a message from the president, Kunihiko Tanaka seems to be taking on the food industry itself. After some of his own personal history, Tanaka denounces companies that prioritize profits: “Managers in those companies would not eat their own products but dare to make and sell such products. Many sushi restaurants are similar to this. They dare to outsource the vinegar for sushi rice, which is the most important part of making sushi. They use chemical seasonings, artificial colorings, artificial sweeteners, or artificial preservatives. They would not care or feel nothing even if the customers feed themselves with chemicals as long as the restaurant does not violate the laws.”

The American website highlights the “fresh, natural, organic” angle, and that’s pretty much it — no messages from the Prez, just the existing handful of Southern California locations and lots of pretty pictures of the food. I can say firsthand, it’s as pretty in person as it is on the screen. There were some items here I haven’t seen anywhere else and enjoyed very much (such as the Crispy Rice with Spicy Tuna), and plenty of traditional Japanese dishes natives will enjoy (such as Natto and Warabimochi).

Whether you walk away with a tiny Mr. Fresh or not, the interactive nature of dining here — with the colorful, constantly moving sushi, the pinball parlor ambience, and that sweet, computerized Japanese woman’s voice that occasionally announces an item — is sure to put a smile on your face.

This is nothing new. Anyone who travels has run into these conveyer-belt sushi joints. I ate at one in London in 2001 and Hong Kong in 1998.

Love the hipster comment! Yes, conveyer-belt sushi is not a new thing, in the article I mention there are around 350 of just this one chain. I've been to a few in Japan, but not with the Mr. Fresh thing. But this restaurant IS new to San Diego. Just drove by a few times today, and there's a steady line out the door.

They started a soft opening, manager told me official opening was April 10, but clearly they're already serving plenty of peeps while still training staff.

Barbarella, is the line out the door due to exceptional quality sushi or the novelty? (I know, I should go and find out myself).

I'd say novelty and entertainment factor. Sushi is good, but it's not the best sushi I've had in San Diego. EDIT: I'll add it's among the best I've had locally for its price point.