A second collaboration beer to celebrate 100 years of Balboa Park 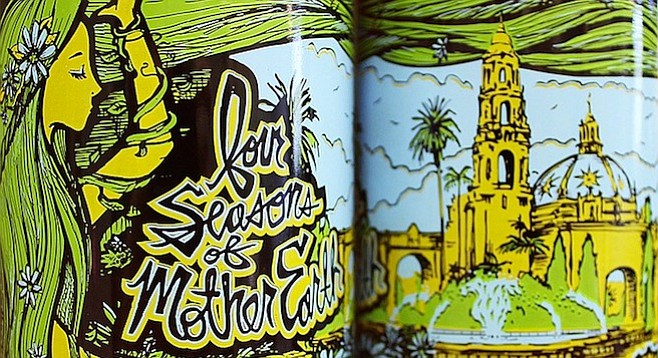 Apparently, that single-hop double India pale ale didn’t exhaust Chase’s civic pride, because shortly after tapping the Centennial kegs, he got back to work on another beer to celebrate 100 years of Balboa Park, this time with Mother Earth Brew Co. Whereas Centennial IPA was brewed to hit 100 on the international bittering unit scale and exclusively use centennial hops, this beer is more about the park itself than its triple-digit milestone.

Dubbed Balboa Park Anniversary Ale, it has been bottled as the spring edition of Mother Earth’s annual beer series, the Four Seasons of Mother Earth. In keeping with the seasonal angle, it incorporates a number of ingredients similar to those that can be foraged within the park — prickly pears, loquats, dates, cane sugar, and honey. Even with ingredients that seem rather sweet, the beer is dry and earthy, offering hints of its flavor additives along with nice essence of stone fruit.

Whereas Centennial IPA was a draft-only offering, this 8% ABV imperial IPA is available in 22-ounce bottles — and they’re rather spiffy bottles at that. Last year’s quartet of Four Seasons bottles featured pastoral, season-accented, wrap-around imagery that, when displayed in order side-by-side showed off a mural of sorts. Last year’s spring artwork was revamped this time around to include a shot of Balboa Park’s Museum of Man. Mother Earth is so happy with how it turned out, they may keep the imagery for future bottlings.