That includes you, Reader! 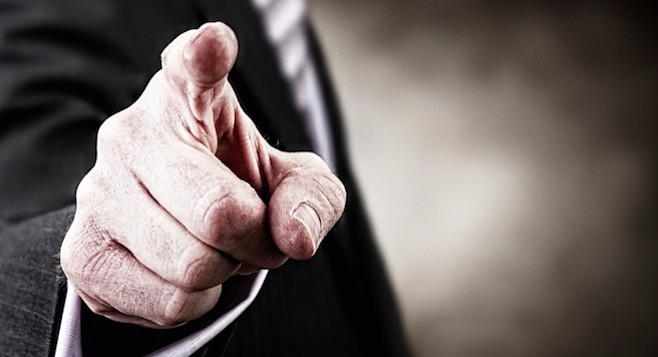 The article (News Ticker: “Blame Reagan, Bush Jr, Obama…and Andrew Mellon”) said that “Laffer lauds tax policies of Andrew T. Mellon,” but did not specify Mellon’s hand in transforming a voluntary excise on income into a mandatory tax using the offer that cannot be refused, This is part of a campaign to suppress a book which is feared and loathed by the lawless state, Cracking the Code, the Fascinating Truth About Taxation in America. 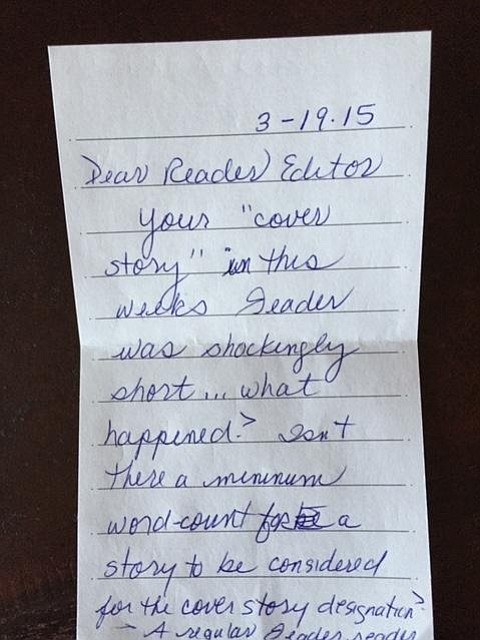 Your cover story for the March 19 Reader (“Someone’s Living in a Container at the Cemetery”) was shockingly short. What happened? Isn’t there a minimum word count for a story to be considered for the cover story designation?

Kudos to Mary Slupe (Letters, March 12, “Mission Valley Aquifer?”) for having something that’s pretty rare in this town nowadays; it’s called common sense. (My grandpa would have loved you.)

Yes, why would we build a stadium on top of a good water source? I would like to go one step further and add, why don’t we put a desalinization plant on Fiesta Island and, to power it, put up a bunch of windmills on those ugly empty hills east of Miramar where the wind never stops blowing?

It’s a fact of life that mankind never effects positive change until he absolutely has to. Well, it’s time, kids.

I can remember when they were planning that stadium called Jack Murphy, and the public didn’t want it out there because who would want to drive way the hell out there into the boondocks to see a football game? It’s too far away from town! (Kind of puts a different perspective on it, huh?)

The people at city hall need to stop rubber stamping every project that comes across their desk that we don’t have the infrastructure for, such as water and power, until they can supply those things. And even then maybe not. Overpopulation ruins our quality of life in this town that used to be so quiet and laid back, and is now such a rat race.

I can remember Grandpa telling me he could have bought land in Mission Valley for 25 cents an acre, but he didn’t do it because he thought the land was worthless flood plain.

It’s been a few months since you did your article about the congestion down at the San Ysidro pedestrian border crossing gate, but it’s still relevant.

As an enlisted Navy service member, I remember going to Tijuana in 2003 on random days of the week and not waiting more than 20 or 30 minutes to cross, tops. Today, if I go on a Saturday afternoon, I’m guaranteed at least a four-hour wait. What happened in the last ten years?

The technology at the border increased, and they have passport R.F.I.D. chip readers (which haven’t been functional since they were installed in 2012). You’d at least think border patrol now being able to scan passports would speed the wait times up, but no. And then there’s the Sentri card lane. But because I got a failure to i.d. misdemeanor charge eight years ago, I don’t qualify for Sentri.

Is something being done? Can something be done? Excessive wait times at the border are inhumane. People are waiting in inclement weather for hours on end. 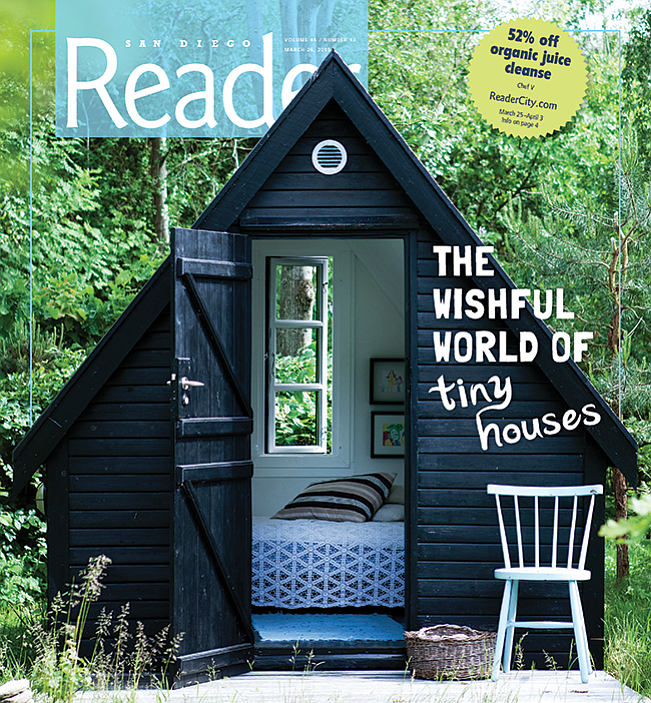 I’m calling to complain that the cover article on small houses doesn’t have any contact information, or the name of the person who wrote the article. So, how do I contact people without this information?

The author’s byline appears in the Table of Contents and at the end of the article. Several websites, including tumbleweedhouses.com and libertycabins.com, were also cited. — Editor

Lookin’ at You, Reader

The Reader’s tendency to suck up to the pukes, kooks, and assorted left-wing slime is exemplified in Mr. Obermeyer’s cartoon ridiculing the San Diego Chief of Police. It’s not only stupid, it’s traitorous.

I was on a bus when a savage entered. Within a few minutes he pulled a knife on a fellow who was not in any way bothering him. Fortunately, San Diego Police responded at once, and this lowlife was detained.

Where would all you so-called liberals, yuppie morons, and assorted dim-witted hedonists with nothing upstairs be without the cops to save your rear ends? The same goes for all those who hate the troops, and give aid and comfort to the enemy. That includes you, Reader! Wise up, goofballs!

Hello, S. Woods! I've lived in Baja for almost 23 years now. It's no longer 4 hours, if you time it properly it's about 20 minutes. It was REALLY horrible after 9/11, and that extended out until recently, but since they opened more car lanes at the border, you get more people driving over (and the wait times are much better) and it makes the pedestrian wait shorter as well. You will be surprised at the difference.