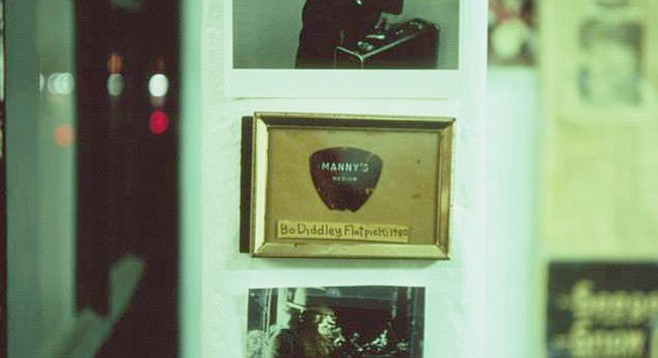 According to Folk Art Rare Records owner Brendan Boyle, on the morning of February 25, a framed piece of San Diego music history was stolen from the walls of Folk Arts Rare Records. The missing item is a guitar pick once used by rock ’n’ roll pioneer Bo Diddley, which was obtained by original Folk Art owner Lou Curtiss.

“I got the Bo Diddley pick at the old Pacific Ballroom [12th & Broadway] after seeing Bo there about 1959,” Curtiss tells the Reader. “It was part of the store from the beginning in 1967.” Sadly, it was events like this that hastened Curtiss’s decision to sell the store in 2014. “I never had much problem with theft of stuff off the walls at Folk Arts, it was mostly records that were stolen over the years,” he said. “But in my last year on Adams Avenue there were a whole series of posters stolen, including Jimmy Reed and BB King/Joe Turner posters from the Pacific Ballroom, a large poster-photo of Billie Holiday, a rare poster of Dr. Isiah Ross that local bluesman Thomas Shaw brought me back from Germany, and several autographed pictures of Lightnin’ Hopkins, Clarence Gatemouth Brown...I think it was those thefts coming right on top of each other that made me decide that I just couldn’t do it on my own in the store and it was time to retire,” he said.

“I have a very strong inclination that this young guy stole it,” said Boyle. “He’s a good kid, but I have a feeling he’s a kleptomaniac. I also feel he could easily have been the guy who stole from Lou in the past. Not a whole lot I can do about it, other than talk to this kid when he comes in again, if that’ll even happen,” he said.

For his part, Curtiss is happy with what Boyle has done with Folk Arts. “He’s keeping things I cared about and adding some features that I always wanted to add. He’s got the energy I had 30 years ago, and he’s letting me be a part of it to the extent I want to be,” Curtiss said. “I hope he’ll be able to keep it going for another 48 years.”

Scumbag punks, taking advantage of an older guy who cannot keep an eye on everything every minute. Instead of recognizing what this man has brought to the community over the years, they steal from him. No respect for who he is; and no respect for his property. Some cultures would cut the hands off of these lowlife thieves. I think that is barbaric. I think they need to be talked to and made to realize why stealing is wrong on so many levels, and then...maybe... just the tip of the pinky.