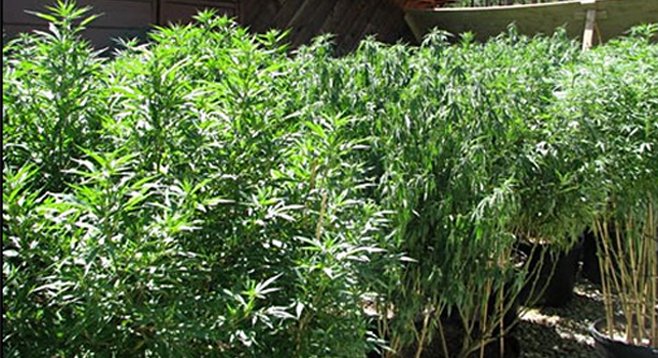 A couple arrested for unlawful cultivation of marijuana and who subsequently was cleared of the charges has filed a federal complaint against law-enforcement agencies over what they say was an illegal raid of their Ramona home in October 2012.

Deborah Little, a cancer survivor and HIV patient, and her husband Dennis, who suffers from a nerve disorder and depression, are seeking damages for a military-style raid conducted by the San Diego Integrated Narcotics Task Force after law-enforcement agencies spotted a plot of pot plants from a sheriff's helicopter in September 2012.

According to the complaint, officers dressed in "military style fatigues and armed with firearms," rammed down the doors, handcuffed the couple, and removed a total of 29 marijuana plants.

As agents and deputies investigated, Deborah Little was forced to sit outside in the cold, despite telling deputies that she had contracted pneumonia months prior. Little also testified that officers refused to allow her to use the restroom and that due to a weakened bladder from radiation treatments she soiled herself and was not allowed to change clothes.

Law-enforcement officers left the property with what they said was over 600 pounds of marijuana. Over the course of the following days, the marijuana was destroyed and the actual weight was never verified.

In court, the couple claimed the marijuana was strictly for personal use; the district attorney's office, in conjunction with U.S. Attorney Laura Duffy, said the couple was growing and selling pot under the guise of medical need.

The court case didn't go well for Dumanis and Duffy. A judge dismissed the charge of cultivation and a jury later acquitted them of possession. Now, the couple looks to hold Dumanis, Duffy, the sheriff's department, and San Diego police chief Shelley Zimmerman accountable.

"This case is an example of a phenomenon that has gained national attention recently: military-style SWAT tactics used in everyday law enforcement," said Nathan Shaman, the attorney representing the Littles in their civil lawsuit.

"More and more we are seeing law enforcement treat our citizens as enemy combatants," continued Shaman. "The Littles' situation provides a stark reminder that even harmless, law-abiding, seriously ill people can be and are terrorized by their own police force. We hope this will send a message to law enforcement that their egregious, unconstitutional behavior will not be tolerated."

Are they going to receive 600 Lbs of pot as compensation?

Hopefully the Littles will get justice and compensation for violations of their Civil Rights.

God, the pot lobby is as bad as the gun lobby. Six hundred POUNDS of weed for personal medical use? Really? That could blunt a lot of depression. All I can say is that Dorian's story has a distinctly righteous ring to it and that Lawyer Shaman is aptly named. I guess they're in trouble, but I think DD&Z did the right thing.

This particular case is very fishy.

There was no evidence that "600 pounds" of weed existed. The extremely large number was literally made up in paperwork after all the supposed evidence was destroyed. The DEA could not back up their claims with the normal video or photographic evidence taken during the raids. Shady.

Really? Is everything you've been told supposed to be "bad" and the "ultimate evils" upon humanity? Or can you just not understand what freedom actually means?

First off you compare pot and guns with nothing other than your misdirected belief of 600 pounds. It's been stated that there's no legal evidence of this number actually being there. Just 29 plants growing. That number is absolutely legal for two marijuana patients to grow within their home according to California law.

As for guns? Got an issue with the Constitution and the Bill of Rights? How about you petition to get rid of the Founding Documents and destroy all ability to have freedom of any sort. That's the only way you're going to get rid of firearms in America. Should that happen the purpose of the 2nd amendment will be reenforced upon American's minds and it will get ugly.

This "600 pounds" nonsense reminds me of pot busts back in the 1960s and '70s, when police would conduct a raid of weed or LSD, later announcing the "street value" at some inflated figure, usually 5-10 times what it would actually sell for.

On the other hand if they have to make amends then I suppose we could divide 600 lbs. by 16 0z. then multiply the result by $300 and come out with damages.

I wonder exactly how much money this raid, plus court proceedings, etc. cost the taxpayer to accomplish nothing more than harassing and abusing some elderly, law-abiding, disabled people? I personally think that money and time investigating murders (especially of ENTIRE families like the McStays or Belvederes, maybe?) would be better spent.

It's easier to catch and prosecute a pot-grower than a murderer!