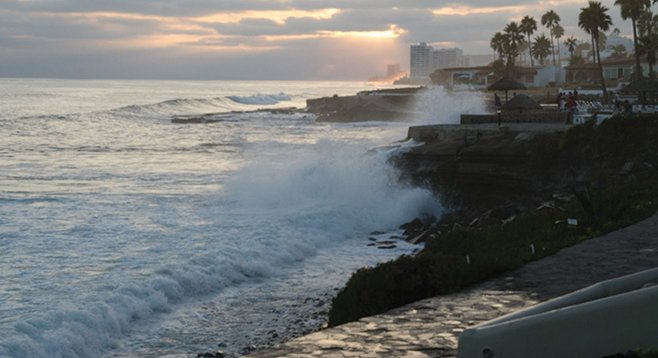 Las Gaviotas is an oceanfront gated community located about 30 miles south of the San Ysidro border crossing. It is ten minutes south of Rosarito. There are close to 300 homes, and many are available for rental. There is a community center with a pool and hot tub and a shuffleboard court, but we go for the surfing. There are several surf breaks along the oceanfront, and compared to Tourmaline Surfing Park it is empty. The only way to get to the Las Gaviotas surf spots is by renting (or owning) one of the houses.

My Tourmaline surf buddies and I found out about Las Gaviotas from a North Pacific Beach resident (Carlos, 65) who owns a house on Opal, and a house at Las Gaviotas. While he still surfs at Tourmo as part of the early-morning crew, he says he does his real surfing down south.

“When it gets a south swell, the waves are perfect and empty. The most we get are a couple of guys in the lineup.”

After a couple of years of listening to Carlos brag about the surf down there, our gang decided to give it a try. We rented the biggest (four bedrooms, three baths) house that was located right on the water. (Most of the rentals go for between $200 and $300 a night during the summer.) That was three years ago, and we have been going every year. This last trip was the weekend after the North Pacific Beach Sip ’n’ Stroll that was held on August 1st.

The reason I know it was the week after the Sip ’n’ Stroll was because so many of the people we met at Las Gaviotas were wearing their brand new North Pacific Beach hats. Everyone is friendly, and a lot of the surfers are regular Tourmaline surfers.

There is no reason to leave Las Gaviotas once you have entered the gates. Do not forget your confirmation documents because the guards take their jobs seriously. Once you are through the gates the keys to most of the units are at the Baja Pro Realty office. Bring everything you might need — beer, surfboards, and beer, for example. On Friday, Saturday, and Sunday they sell great tacos. There is a fresh-fish stand that sells fish caught the same day. They make a great shrimp ceviche. All of this is right at the community center swimming pool. And from every spot, there is a great view of the surfers on the several surf breaks right in front of the complex.

The famous surf spot K-38 is about two miles north of Las Gaviotas. I’ve found that the Las Gaviotas surf breaks are as good and not as crowded. And going south about one mile is Raul’s, another good surf spot. It costs $5 to park a car there, so that keeps the number of surfers to a minimum. Raul’s is a friendlier surf break, which is much like surfing at Tourmaline. The waves can get big, but they take their time breaking. That is good for beginning surfers.

Getting through the San Ysidro border crossing is the big challenge. It takes nearly a half hour to drive back from Las Gaviotas to the border. The wait time in a car on a Sunday morning is around two and a half hours. If you want to avoid all of that and cut the wait time down to about five minutes you will need a Sentri pass and have your car Sentri-registered, too. Search the Reader website for the keyword Sentri. There are a couple of articles discussing how to get a Sentri pass and how much better life can be when you have one. I will not go to Mexico again without one.