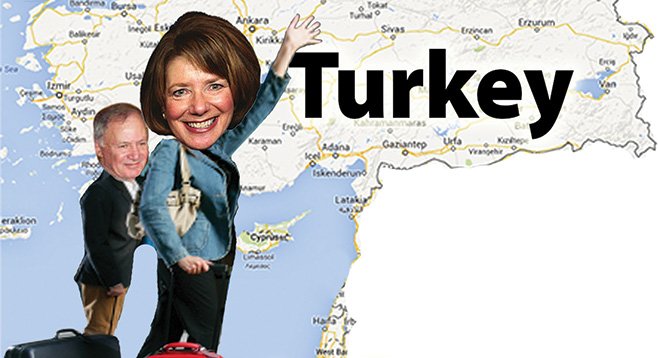 It’s nothing compared to the thousands of dollars of special-interest money spent by San Diego congresswoman Susan Davis on junketeering over the years, but the office of fellow Democratic House member Juan Vargas has also been dipping into the freebie till of late. Davis and her husband Steve recently got back from summer trips to Israel and Turkey, worth a total of $31,441, respectively paid for by the American Israel Education Foundation (an offshoot of the American Israel Public Affairs Committee) and the Aspen Foundation.

The journey of Vargas aide Phil LaRue was a lot cheaper and closer to home in more ways than one. The staffer went up the road to Philadelphia on August 18 to attend a one-day conference sponsored by a Washington DC–based nonprofit called Third Way. “Our mission is to advance moderate policy and political ideas,” says the group’s website. “Our agenda includes: a series of grand economic bargains, a new approach to the climate crisis, progress on social issues like immigration reform, marriage for gay couples, tighter gun safety laws, and a credible alternative to neoconservative security policy.” Financial market deregulation by Congress is also in the mix.

Chairman of Third Way’s board is well-heeled investment banker John Vogelstein and vice-chairman is David Heller, ex-head of global equity trading for Goldman Sachs, who left the company during a big profit falloff after the market crash of 2008. Though the Third Way website doesn’t list its donors, the group got $50,000 from San Diego’s Qualcomm over the past year, according to a company disclosure required by a lawsuit regarding the firm’s lack of political funding transparency. Topics on Third Way’s August agenda included “Implications of Dodd-Frank Reforms for Derivatives Markets and Exchanges.”

According to the congressman’s disclosure of the trip, which cost Third Way $89 for travel and $34 in meals, it was important for LaRue to attend because “As Communications Director, Phil is responsible for communicating complex policy concepts on financial services issues to the media, stakeholders, and the public as a whole.” LaRue is a Pennsylvanian who had considered running for an open House seat there earlier this year, according to a January report by the Reading Eagle. In addition to his activities for Vargas, LaRue is also the spokesman for the self-styled centrist House New Democratic Coalition, to which both Vargas and Susan Davis belong.

So has anyone else wondered how we got into this rabbit hole of oligarchy?

Congressional staffer ... departing D. C.... for events in his home state of Pennsylvania... with dreams of running for office. Why did this take me back to the early episodes of House of Cards?

You said it: "House of Cards." I hope La Rue is dry. Anyway, that Third Way agenda is pretty disgusting. Susan Davis' multiple Israel lobby trips are pretty disgusting by now too.Surely she long ago absorbed whatever message AIPAC wanted to convey. Depressing. Somebody please send Matt Potter a tip about an altruistic politician doing good.