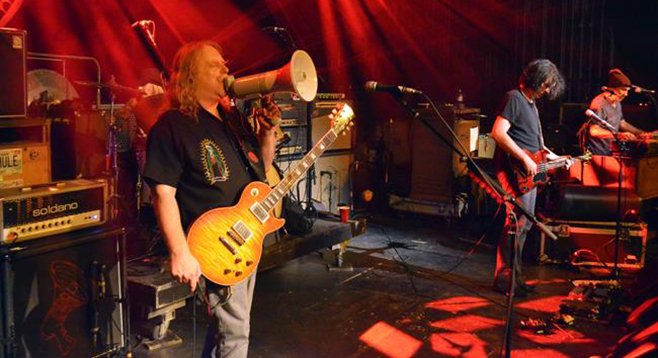 Gov’t Mule, basically a canvas for the guitar of Warren Haynes, is celebrating 20 years as a band. Warren Haynes calls the Reader from a spot on the road an hour north of New York City. “Since this is the 20th, we’ll be covering a lot from our career. But every set list is different. When we come back to a city, we check to see what we played there before, and we make it different. We thrive on spontaneity.” It must be a challenge keeping set lists in order for a band that spends as much time on the road as does the Mule, yes? “Well, these days,” he says, “that job’s a lot easier.”

Gov’t Mule and the Stone Foxes

Haynes is possibly best known as a member of the Allman Brothers Band. He’s the guitarist they hired to replace the late Duane Allman. He’s likewise toured with the Grateful Dead. But assuming someone may not know much about Warren Haynes, where would he send a new listener to find the best representation of the Mule’s sound? “Dos,” he says, “our second record? That’s a real favorite of our fans. Life Before Insanity. Any of our live records, really. [Gov’t Mule] thrive being onstage. That’s where we feel most comfortable.”

What’s left that he’d like to do but hasn’t gotten around to yet? “I’d like to make a solo record, something more centered around my singer/songwriter material, something acoustic. I have a lot of stuff ready for that. I’d like to record some jazz and traditional blues music, too.” He’s gotten to play in some of the best bands of the past couple of decades, a high honor for any musician. But along the way, Haynes has had to fill some big shoes — Jerry Garcia’s and Duane Allman’s, for example. “Well, I don’t like to look at it that way.” End of story, says the unlikely guitar hero.