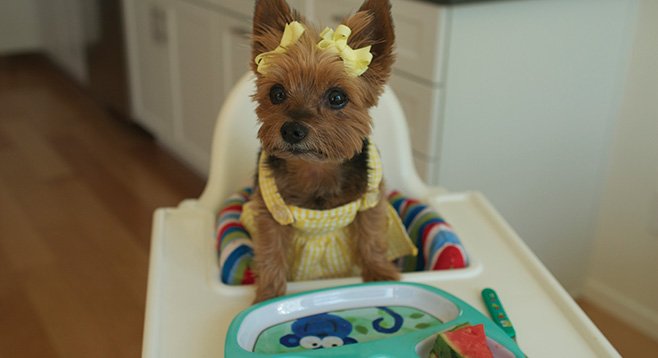 Five days and 100 films. That’s the promise made by this year’s San Diego Film Festival.

The festival runs September 24–28, with the lion’s share of the screenings to be held at Reading Cinemas Gaslamp 15 and Arclight Cinemas in La Jolla. Celebrities scheduled to appear include Beau Bridges, Michelle Monaghan, Alison Pill, and Saginaw Grant. Alan Arkin, a guy you’re gonna like, will be on hand Thursday, September 25, to accept the inaugural Gregory Peck Award at the “Variety’s Night of the Stars: A Tribute” event.

This paper is no stranger to covering film festivals. (Be on the lookout for an October 6 cover story on Asian Film Festival founder Lee Ann Kim.) But those keeping score at home will note that this is the first time in its history that the SDFF has received this amount of ballyhoo. We have J. Walcher Communications — particularly account supervisor extraordinaire Sandy Young — to thank for this bit of PR wizardry. Here’s looking at many more years working together.

Matthew Lickona and I will eventually get around to reviewing the major releases shown at this year’s festival. Below are reviews of three films that may not pass this way again. In their own way, they form a neat trilogy of road movies.

A cookie-cutter couple (the perfectly balanced Kasi Brown and Brandon Walter) who treat their “Awwww!”-inspiring pup a little too much like family embark on a screwball road trip to retrieve the “child” after it’s been kidnapped by green-eyed dog-sitter Jill (Shaina Vorspan, showing off a riotously cocksure comedic performance).

There you have it: two shallow babyphobes lose their dog, the one thing they love more than life itself. It’s amazing how far some people can go with a seemingly one-joke premise. The greatest compliment I can pay writers-directors-producers-stars-grips-accountants Brown and Walter is that, aside from the pooch — Laila, a Yorkie so adorable it makes Paris Hilton’s latest high-ticket furry fashion accessory look like Cujo — there is not a whit of cute anywhere in the picture.

Short of asking the CHP to issue an Afghan Alert, the abduction and its pursuant chase play like a spot-on satire of America’s Most Wanted, the show that transformed a real-life grieving father into a celebrity vigilante. Normally, I’m the first to complain about unnecessary romantic subplots, but the union of Jill and Jeff (Dan Janson) — the younger, more slovenly half of a low-rent father-and-son investigative team — yields comic magic. From his poop-brown pants to his urine-yellow sports shirt (neither of which contain a fleck of fabric fiber to be found anywhere in nature), Jeff personifies walking E. coli. Whether adding color commentary while rifling through the contents of Jill’s purse or knowing precisely how to affect a shirttail at half-mast, Janson strikes slob gold.

Amanda Plummer? Gaby Hoffman? Maybe it’s the boomerang-shaped grin or the rooted presence that never finds her out of the moment, but there is something about Vorspan’s command of the frame that brought to mind this pair of heavyweights. Her only recognizable credit to date was a bit in Nancy Drew. We hope to hear much more from her in the future.

Not every offramp taken on the road to Jill’s mom’s house in Santa Fe is a breezy ride — I’m still not sure why we wound up at a hippie commune — but minor complaints aside, this is the comedy surprise of the year.

The world’s smallest man hits the road in search of the world’s largest everything.

We join 26-year-old Craig Hamilton (Harry Lloyd) in the deep South, his high-school graduation tassel still suspended from the rearview, midway through a cross-country road trip to Jackson, Mississippi. He’s flying solo, and it’s clear from his purchase of a tin of chewing tobacco that the New Jersey native — an advertising exec who hawks kitty litter and condoms — wants nothing more than to be looked upon as a tourist. The problem is, within 40 seconds of meeting Craig, even the most benign stranger wants to wring his neck. Knowing full well that his sibling’s travels will take him through town, Craig’s brother Joel still refuses to meet him for a cup of coffee.

Writer-director Bryan Reisberg takes his time getting around to what necessitated the trip. What’s the point of showing your hand early on when Craig’s lie to his bride-to-be about travelling alone makes the jaunt that much more pleasurable?

An overnight voice on the radio dispensing “super glue for the heart” while taking requests is about as close as Big Significant Things comes to a condescending depiction of the American South, a region forever contaminated by films such as Deliverance and Stroker Ace.

Playing a constantly moving target makes it hard to target Lloyd’s performance, even though he appears onscreen for 95 percent of the picture. At the very least, Craig is an unlikable character that Lloyd and Reisberg still manage to make compelling, even though there’s not a moment in the film that found me squarely rooted in his corner.

Come to My Voice

Our travels take us to Turkey for this novel look at two generations of Kurdish mountaineers — the elder, Berfe (Feride Gezer), and her young granddaughter, Jiyan (Melek Ulger) — hot on the trail of at least one weapon of destruction. Gun “buybacks” have become a popular attempt to take weapons off the street, but what if in place of a Walmart gift card, people were asked to trade firearms for a loved one’s freedom?

The child’s bedtime story is shattered by a group of military detectors, soldiers on the hunt for rebels with guns. Jiyan’s father is captured and the town’s mayor is handed an ultimatum: a handful of his constituents will be held prisoner until hizzoner can produce weaponry the men swear they don’t own. Jiyan tries her best to assemble an arsenal, but as granny points out, plastic guns don’t count. Nor does the ancient rifle Berfe brings to market. It’s up to our heroines to scour the countryside in search of a rod.

The opening narration is handled by Dengbej (Muhsin Tokcu), the ancient leader of three blind bards, a trio of storytellers available for weddings and celebrations. It’s at just such an occasion that Dengbej regales the crowd with his real-life tale of the old woman, the little girl, and the gun. Stories unfold like an exquisitely crafted set of nesting eggs. Subplots interject as Dengbej’s narrative segues into flashback mode, forcing Berfe’s story — and the running parable contained within — to the fore.

It’s our wandering fablers who ultimately dot the path of our leads and bring voice with the simple message: “The shadow of guns mustn’t be cast over peace.” Director Huseyin Karabey and cinematographer Anne Misselwitz know how to frame landscapes, but it’s the night exteriors of silhouetted windows lit from inside that add to the film’s tight-knit feelings of a society undivided. Highly recommended.