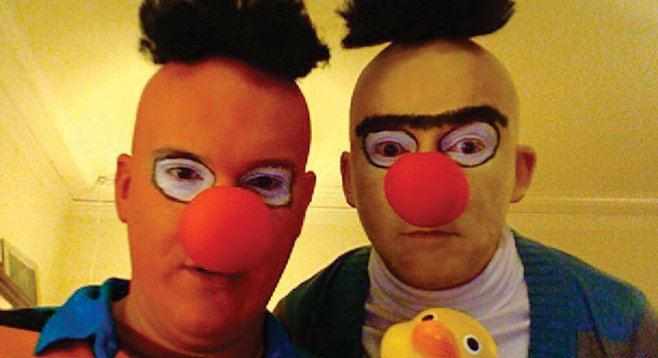 Got any suggestions for good Halloween costumes? I like to start early with the planning, decoration, and execution of epic Halloween shenanigans.

There are a few costumes I’d like to see someone do well, but Bert and Ernie from Sesame Street tops the list. For some reason, it always comes out super creepy. A Reader T-shirt to anybody who can show me a noncreepy Bert and Ernie this Halloween season!

Otherwise, hipster Halloween costumes usually fit into one of the following camps:

Like when you stop shaving your upper lip for two days and wear a bathrobe so you can claim to be “Hipster Hugh Hefner.” This minimal effort indicates the hipster in question considers himself too cool for conventional celebration, yet wishes to be commended for his cleverness, usually by the people with whom he shares weed or beer. Roughly equivalent to traditional “sexy cat ears,” this half-hearted ambivalence toward anything and everything perfectly captures what most people see as the worst side of hipster culture.

Creative hipsters spend obscene amounts of time fashioning the counterpoint to the Ironic Non-Costume. Just like it sounds, this labor-intensive work of art disguises the wearer as something that requires explanation to a significant majority of Halloween partygoers. I overheard one hipster couple explain, “We’re Tubbs and Edward, from the League of Gentlemen,” over and over again at one party, and what a Tubbs and Edward they made! Who cares if nobody gets it. By paying homage to often underappreciated history and pop-culture, giving new life to old ideas, and flexing their creative muscles in the process, hipsters in these costumes showcase the best aspects of hipster culture.

No. You can’t do blackface “ironically” with your white hipster friends. Nope, nope, nope. So much nope!

You know it when you see it. Not restricted to hipsters, by any means, but also not closed to them.