The sand is full of wasps

In defiance of the claim that there are no bad insects. 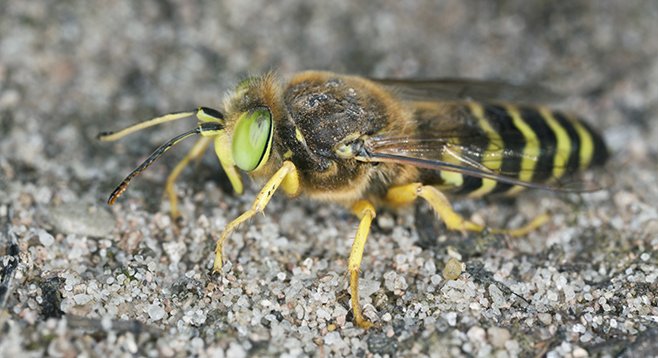 Check out the pic of this bee I found hanging out in Mission Beach. He was digging in the sand. Cool, right? It’s definitely freaky that the sand might be full of bees, but whatever. Bees are awesome. Just thought I’d share that with you. Cheers, dude.

Hey, nice shot. Hope you Instagrammed that. Not a bee, though. Sand wasp. They dig in sand to hunt and/or lay their eggs, which they bury alongside paralyzed caterpillars that the baby wasps eat upon hatching. They’re not that aggressive, so don’t worry about getting stung by sand wasps at the beach. I like to rank stinging insects according to how horrible they are (bees > wasps > hornets in terms of likability). Science says, “there are no bad insects,” but I beg to differ. That’s like the people who say, “I like all the music,” and I’m, like, “Oh, yeah? So, you like Nickel Creek and Nickelback?” (Trick question — both lame.) Wasps aren’t all bad, since they eat pests, but they can be pricks. Not as much as hornets, though. Those guys are just assholes. You want a dose of nope sometime, Google “tarantula hawk.” Huge wasp, lives in the desert, three-quarter-inch stinger, kills tarantulas. Not a hornet, but still high on the heinousness scale.