A "pleasant diversion" turns into something 1000 percent larger. 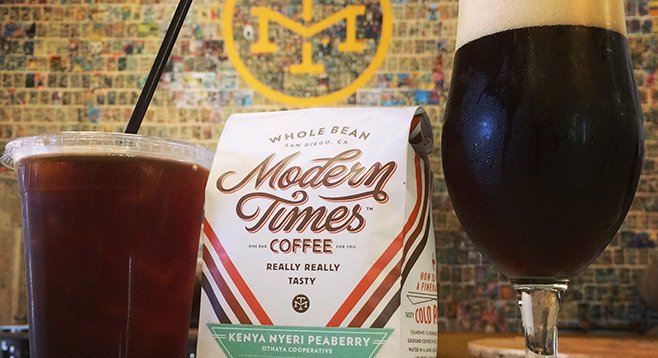 An artisanal approach to coffee isn’t limited to roasting or dripping method. The same creative impulse that dry hops or grapefruit put into beer can drive third-wave coffee purveyors to seek out ways to embellish a finished coffee’s flavor. As it happens, one local craft-beer producer provides a good example of this.

Following a first year of remarkably quick growth, Modern Times recently made some moves to expand its other beverage concern: coffee. The microbrewer claims to be one of few in the world that doubles as a micro roaster — with an emphasis on micro. Thus far, it’s been turning out beans in three-pound batches on a small secondhand roaster. But the company just ordered a 15-kilgram Giesen with the potential to increase its roasting capacity 1000 percent.

That will arrive toward the beginning of next year. In the meantime, the many small batches have given the design-savvy team a lot of opportunity to experiment, initially with an eye on improving on one of its beers. The idea for Modern Times to roast coffee beans came along early, principally with the goal of having control over flavoring one of its flagship beers, the Black House oatmeal coffee stout.

In a 2013 blog post, founder Jacob McKean cited roasting coffee as a “pleasant diversion from the rigors of starting the brewery.” He then floated the idea of drinking coffee brewed from home-roasted beans, alongside a beer brewed with them. He followed through. I did exactly this at his tasting room in August.

McKean described adjusting the roast and blend of beans as he developed the beer’s recipe with brewer Michael Tonsmeire, fine tuning the flavors of one to impact the other.

Black House — the coffee — is a riff on Mocha Java, the historic blend many of us have heard of without entirely realizing it. The original blended chocolatey, acidic Mocha beans from Yemen with the smooth, full-bodied Java beans of Indonesia. The Black House take incorporates fruity Ethiopian and earthy Sumatran beans, with McKean’s professed goal of capturing the flavor of a “chocolate covered blueberry.”

Helping him achieve this was head roaster Amy Krone, a graphic designer who’s also contributed to the oft-remarked-upon styling of Modern Times’ two tasting rooms. Krone says she picked up an interest in roasting while working at La Jolla’s Bird Rock Coffee Roasters and says that already having been a beer geek, her appreciation for artisanal drinks “just kind of flowed seamlessly into coffee”.

For the bagged beans, Krone uses the same roasting technique derived for use in the stout, but blends them at a different ratio. McKean says the coffee gets more of the Ethiopian beans’ brighter, fruity presence than the beer can handle.

But the tinkering hasn’t ended there. Krone and McKean have also been experimenting with barrel-aging beans. In the back of the brewery, porous green coffee beans sit in in rye, bourbon and wine barrels, absorbing flavor, tweaking each coffee’s flavor profile.

Some of the better efforts have been used to highlight special editions of the Black House Stout. Others may be found on tap or in bags at Modern Times tasting rooms, which began selling whole beans and cold-press growler fills in July. The beer producer also recently secured a deal to sell beans in local Whole Foods beginning sometime in October.