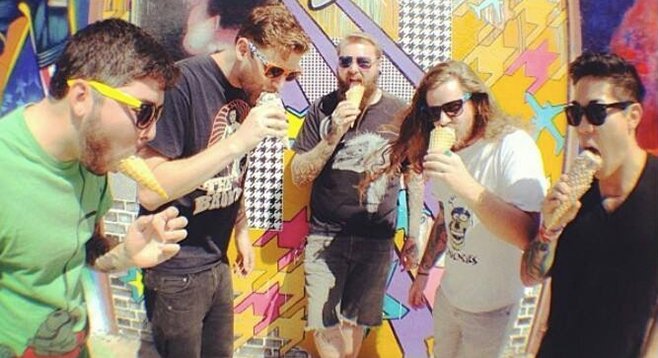 It’s now up to Kodiak, a five-man punk-metal band from North Park, to keep a local tradition alive. For more than ten years the loft above the bar formerly known as Scolari’s Office has been the unofficial heart of the North Park rock scene.

“It’s called the Rooster House and I have no idea why,” says Kodiak bassist Josh Ravin.

Scolari’s Office was once ground zero for live music in North Park. The party and the bands would continue upstairs after the bar closed at 2. “Old man Scolari didn’t care,” says Ravin, who notes tons of bands have played, recorded, and/or lived there over the years. Bands such as Tourettes Lautrec, Battling Maxo, the Mites, Red Fang, Doug Sanchez, and Sleeping People have all been part of the Rooster scene.

But while North Park has gentrified, and Scolari’s has morphed into a lounge called the Office, featuring deejays spinning reggae, hip-hop, and dance-pop music, the upstairs Rooster House keeps its funk and vitality.

“Four of our five members live there,” says Ravin. “Dean Reis [the Sultans, Heartaches] helped us record our first album there last year.”

Living in this North Park landmark has its pluses and minuses. “People can still come over after shows and play and be loud. But on Friday and Saturday, it can be a nightmare with so many drunk people walking on the street.”

Kodiak’s first tour, which included Seattle, Portland, Las Vegas, and Long Beach, ended last week in Tijuana. “It was Mexican Independence Day [September 16] so we thought it would be something special,” Ravin tells the Reader. “We were depending on the other two bands for the draw, but they both canceled. No one came to see us, specifically, but people in Tijuana are really responsive to all types of music. We sold a lot of merch. We definitely will go back.”