Ed floats in to Johnny’s Deli; his torta isn’t so lucky. 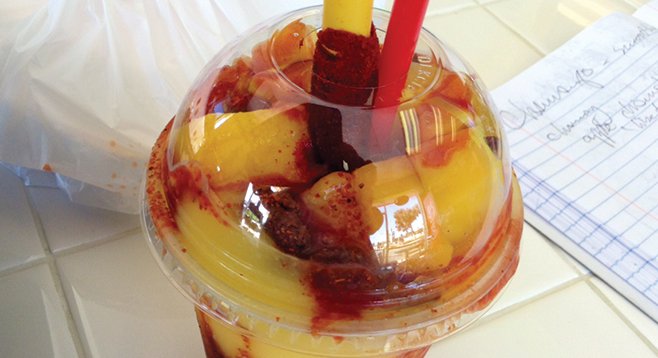 Stop the train! This I gotta see.

I’m on the Blue Line, just coming in to Bayfront/E Street, Chula Vista. And thar she blows! Incredibly, it’s a big ol’ sailing ship hull, high and dry on chocks.

I cut through some bushes in back of the station, up a dirt slope, and come face-to-face with, well, the bare-breasted figurehead of a young lady at the stem of this old topsail schooner. Sign on the scaffolding reads, “The Swift of Ipswich...Port of Los Angeles.” 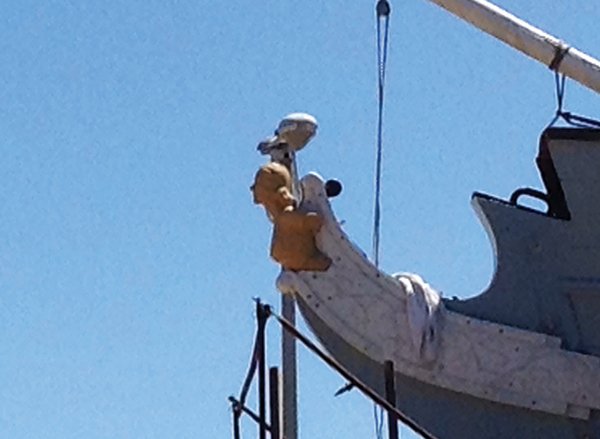 Figurehead of Swift of Ipswich

Turns out The Swift was a Revolutionary War privateer. She was captured by Britain’s Royal Navy. Seems this is a 1939 replica. Belonged to James Cagney. Right now, she looks a little sad. Gets me thinking. To be a sailor back then, great, but the food wasn’t so great: salt pork, weevil-infested biscuits...

Hmm... Food. Yes, I could eat while I’m here. I suddenly remember a great barbecue joint just up the road. Croom’s. Their delicious smoke used to billow across H Street from their streetside 44-gallon-drum grill near Broadway.

So, I head in that direction, except — oh, no. Croom’s has closed, and a brand-new place, Johnny’s Deli & Fruteria, has opened in its place. They do tortas, tostilocos, “gourmet sandwiches,” and, hey, chamangos? What in tarnation is a chamango? 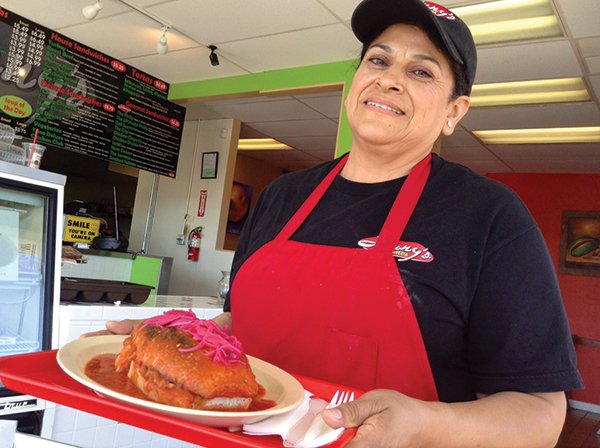 They have a zillion smoothies, fruits, juices, salads (four to six bucks), and tons of standard sandwiches. The House sandwiches (such as turkey, roast beef, honey ham) all go for $5.25. Deluxe (like the TCA: turkey breast, cheese, avo) go for $5.75, and “gourmet sandwiches” go for $6.25 (like the “Ultimate Philly,” which comes with steak or chicken, grilled onions, peppers, mushrooms, jalapeños, cheese, and chipotle mayo).

“Today’s special” gets you half a house sandwich with soup or side salad or a fruit cup for $5. Plus, they have all-day breakfasts, all under five bucks (except for the breakfast special: two pancakes or French toasts, two eggs, two sausage or bacon and coffee for $5.99).

But the most interesting part for me is the most expensive piece of the menu. Tortas, $6.49.

Thing about tortas is they’re big. They can hold a ton of good stuff inside. The Milanesa has a thin slab of beef, the lomo (tenderloin) is pork, there’s a ham-and-cheese, and then there’s the torta ahogada.

I suddenly realize that means “drowned torta.” What the? I know it comes basically from Guadalajara. They say it’s Guadalajara’s signature food. Like, if you’re watching a big-time soccer match in Guadalajara’s Estadio Jalisco, you pretty much have to eat one of these things. It’s just the tradition at the stadium, even though tortas ahogadas are about as messy a dish as you’ll meet.

“You can have it the real way or the gringo way,” says Yolanda, the gal at the counter. “‘Real’ is with the torta drowned in a picoso salsa made from chile rojo, with vinegar, garlic, oregano, or you can have it with a tomato-based sauce.” 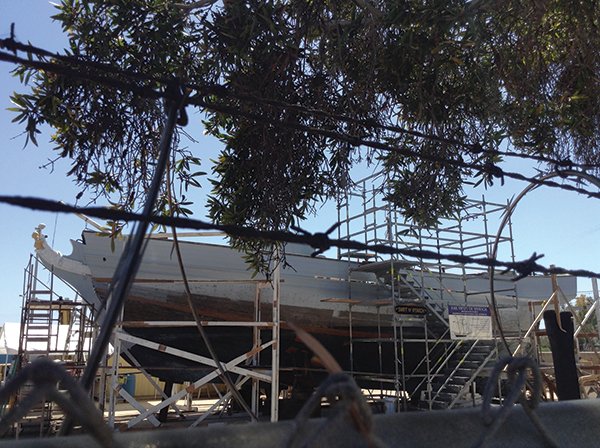 Topsail schooner at a trolley stop in Chula Vista?

No contest, of course. I go for the picoso and for the lomo, not the shredded pierna (leg meat). So glad I did. The torta comes huge, with slabs of grilled pork, in two halves; and, yes, sitting in a lake of this peppery red salsa.

Just as well you get a plastic knife and fork. It is a mess — a hot mess at that. Hands wouldn’t work. And filling? It’s not just the pork; there’s frijoles, mayo, lettuce, tomato, and onions inside, as well as pink — pickled, I guess — onions all over the top. The whole thing’s a soggy mess, but the torta itself doesn’t disintegrate. It hangs together.

And hot? Let’s just say the chilies earn their pay. The bottle of Smartwater I got ($1.79) comes in real handy.

There’s so much, I only get halfway through. Have to pack the rest.

I’m just about to leave when I notice the chamango item again. It’s in the smoothies section. Costs $3.99. Oh, what the heck. Just to find out what the cha part is all about.

So-o glad I did. Yolanda is back there a good five minutes, chopping up, blending, pouring. She finally comes out with this plastic cup loaded with mango pieces and liquid mixed with dark stains of red all through. There’s a main red straw, then another wider, shorter yellow straw that’s kinda wrapped in the red stuff. And just like I remember noticing with tostilocos, here, too, you get this salty, sweet, sour, and hot chile flavor mixing with the richness of the mango. Makes it way more interesting. Turns out it’s chamoy, a mix of dried fruit like apricots with brine, plus, natch, chili powder. And the red stuff wrapped around the yellow straw is tamarind candy, so you can suck, chew, and gobble this stuff all at once. Talk about umami? This is it, right here.

Twenty minutes later, I’m back waiting to get back on the trolley, in awe of the fact I’m still discovering things to eat that are totally new to me. The drowned torta. The chamango. I look up at the Swift again. The matelots aboard this ship’s namesake probably never got to eat so well. When I think about it, those weren’t the good old days; these are the good old days right now.