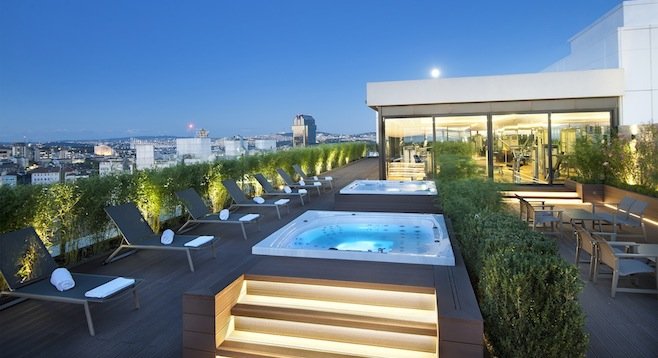 In the past, the Kensington resident has been off to Vienna, Tokyo, Barcelona, Canada's Whistler Resort in British Columbia, and Puerto Vallarta, among a host of other exotic destinations, paid for by foundations and think tanks linked to special interests.

Last month, Davis traveled to Israel with husband Steve for a ten-day trip (August 2 through August 12) arranged by the American Israel Education Foundation, an offshoot of the American Israel Public Affairs Committee (AIPAC), which styles itself as “America’s pro-Israel lobby.”

Meals, lodging, and other expenses for the pair paid for by the foundation added up to $17,908, according to a Davis post-trip filing posted online by Legistorm.com.

Scheduled events on the itinerary included an "insider briefing on Iran" from Israeli reserve major general Amos Yadlin, director of the country's Institute for National Security Studies and immediate past head of the Israel Defense Forces intelligence branch.

"One cannot understand Israel's position on Iran's nuclear development program without understanding the trauma of the Holocaust,” according to an "explanation of visits" included in the material.

"Israelis view threats to its destruction in light of the events of the 1930s and 1940s, when the German government's threats to exterminate the Jewish people were not taken seriously by the international community."

Other highlights of the journey included a talk regarding the "Ethics of the Israel Defense Forces" and a sit-down with prime minister Benjamin Netanyahu. A visit with wounded Israeli soldiers followed, as did a tour of Masada, site of the bloody Roman siege and mass suicide, the itinerary says.

According to the Davis filing, "Member and spouse stayed 3 days at own expense, and departed Tuesday, August 12, 2014."

In February of last year, the traveling pair went on a $17,096 trip to India, courtesy of the nonprofit, which has derived its funding from corporate contributors including Microsoft, PepsiCo, Levi Strauss, Duke Energy, and Credit Suisse.

Additional sponsors of the Turkey travel junket, on which 16 other House members were also invited, were listed as the Carnegie Corporation of New York, as well as the Luce, MacArthur, and Rockefeller Brothers Fund foundations.

The foundations paid Davis’s and her husband’s $13,533 tab for the junket, during which she was to "meet and discuss issues regarding national defense" and "U.S. policy in the Middle East" with "foreign officials and scholars with foreign policy expertise," said her disclosure. The congresswoman reported that the couple foot their own bill from August 13 through August 15.

"Whither Iraq?" asked one topic of discussion. "Iraq's territorial integrity and its future as a nation state are in serious jeopardy." Another sought to explain, "How Iran's Internal Dynamics Affects its Nuclear and Regional Ambitions."

Though the official itinerary offered nothing in the way of shopping trips or dining details, the Marti Istanbul Hotel, where the couple was put up, advertises itself as a "glamorous property...within easy reach to all major historic sites and ancient bazaars, as well as a short ride to the famed Bosphorus shores.

"The Hotel offers a full range of luxury services and amenities, from tastefully appointed restaurants and generous meeting facilities to an exceptional, top-floor Spa."

At what point do the high-end travels serve to instill a degree or two of insulation from reality?

This is truly sad. Not surprising but very disappointing, again. The cost alone. It should have been donated to the families of children who died in Gaza. Junketeering while children are dying. How about going back to Washington and figuring out some ways to end the war? And by the way, with all the money we spend on intelligence, state department, staff members and the like, you would THINK our members of Congress would not have to get their briefings about Iran from Israeli officials! (included was "an insider briefing on Iran from an Israeli reserve major general"?). My god, no wonder we're in trouble. I don't begrudge fact-finding trips for elected officials, but I do reject special interest funding; if it's something important, pay for it with government funds. Why muddy the waters? But any time they take their spouse or significant other, it's a vacation, and a rip-off, and should not be allowed. Either it's work or it's play, and clearly Ms. Davis and her husband, Dr. Davis, like to play. Even when there's a war going on. Outrageous.